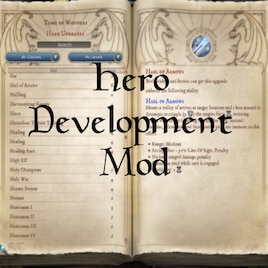 Eomolch
Offline
See all 339 collections (some may be hidden)
You need DLC to use this item.

This item has been added to your Subscriptions. Some games will require you to relaunch them before the item will be downloaded.
Description
The goal of this mod is to make hero development more interesting and diverse. What I mean by this is that I wanted to get away from my usual routine, which usually was “make every hero a ranged dps unless it is a warlord”. So I introduced 3 specializations to each class that a hero of that corresponding class could learn and would provide a different “route” of available hero upgrades which usually aimed at making the hero more suitable for a specific combat role. For further diversification I introduced racial hero upgrades, which while less important than class or specialization add some nice utility and style.

– general changes:
— hero upgrades unlocking spells cost 1 less (now 4 was 5)
— defense, melee and ranged damage upgrades increase in cost by 2 per level (was 1)
— removed some of the old hero upgrades (they still show up in the tome of wonders even though they shouldn’t)
— removed the class-dependent starting items

I haven’t counted the number of new abilities I created for this mod, but you can be assured that they are plenty ;)

*****Compatibility*********
- The mod only partially works with heroes from custom scenarios or mods. To make a hero compatible with the mod you need to remove the class-dependent starting item (musket, longbow, etc...) and give it the "Race X Hero (flag)" upgrade where Race X is the respective hero's race (e.g. an orc hero needs the "Orc Hero (flag)" upgrade)
- The mod should be compatible with any mod that doesn't directly change hero upgrades or leaders.
- here is a link to a Compatibility Mod for the Triumphant Heroes Mod of Tombles and Tibbles:
http://steamcommunity.com/sharedfiles/filedetails/?id=526898048

*****Important Information*****
- There is a new starting spell "True Undead Heroes and Vampires" which has to be used when one of your necro heroes gets the Lich II or Vampire II hero upgrade or you transform a unit by using the vampire's kiss ability. Without using the spell those units will be treated as non-undead units by the game (stat boni/mali still apply) which e.g. results in being unable to be healed by the heal undead ability. This spell also fixes a problem with double protections and weaknesses that will occur if a hero gets those upgrades after harbingers of death was researched. Unfortunately that spell often has to be cast more than once (due to some technical reasons), so you best cast it until no more valid targets can be found.
- there is a complete documentation of my mod at http://aow.triumph.net/forums/topic/mod-hero-development-mod/

Avey Apr 23 @ 9:58am
Hello i have translate to Russian. Can we speak about upload for your mod bro?

Pirola Feb 12 @ 5:08am
I figure you most likely are not really active anymore just want to say i love the mod! i'm however getting issues with true undead and vampire. in my games, it reverts the resistances even if i dont have harbringer of death. so if im playing a dreadnaught for exemple but i recruited a necro and get it to vamp 2, its gonna make it have non-undead resistances. Also sometimes the heroes dont get healed by the heal undead ability (not on the tactical map, i mean the turn-by-turn health regen) although i dont know when i need to do more testing for that.

Eomolch  [author] Jan 3 @ 1:48pm
Hi Rama! That is super cool, thank you! :0 I'm currently very limited in my free time, but for this I will try find some room this week to add the translations to the mod.

Eomolch  [author] Oct 25, 2021 @ 11:23am
Hi [JdG] Pejman, yes, the spell should still be there with my mod. I haven't changed anything about in in the last mod updates. I implemented it as an avatar spell, so maybe you have another mod running that changes avatar type spells and blocks it?

Hi CakeOfDoom, I have to admit I never liked spell casting heroes too much in AoW2 (didn't play AoW1), so I also didn't make them a focus in my hero mod either (heroes can learn 1 new spell from their racial profession though, which comes from specialization spells).

Lt. Ruben (AUT) Sep 11, 2021 @ 5:02am
Is it just me or do heroes in AoW3 not have a lot of spells? Like, in AoW1 and 2 the main hero (caster) had far more spells, but also the heroes where better spellcasters.
i really miss having dedicated spellcaster heroes :(

Lord Hand May 16, 2021 @ 2:29am
I only have an auto save from the turn where it occurred as I thought advancing the turn might somehow resolve the spell cast if I queued up something else. But I'm having trouble reproducing it in a new game. I am 1/2 convinced it's an extremely rare conflict with the PBEM balance mod, as that's the only other mod I run that even comes close to editing heroes or spells. But I run quite a few mods in addition to yours and that one, and I'd hate for you to have to deal with all that garbage for something so rare. Plus I wouldn't know how to send the save your way.

There may be some edge-case when you have a hero that is fully converted and one that only got affected by the spell once. But I'm not sure if it's something that can easily be resolved, especially not for your already bugged game.