Greenlight > Games > Overclocked Games's Workshop
Greenlight is being retired. For more information on how to submit games to steam, refer to this blog post.
This item has been removed from the community because it violates Steam Community & Content Guidelines. It is only visible to you. If you believe your item has been removed by mistake, please contact Steam Support.
This item is incompatible with Greenlight. Please see the instructions page for reasons why this item might not work within Greenlight.
Current visibility: Hidden
This item will only be visible to you, admins, and anyone marked as a creator.
Current visibility: Friends-only
This item will only be visible in searches to you, your friends, and admins.
Yokai Scrolls
Description Discussions1 Announcements1 Comments32 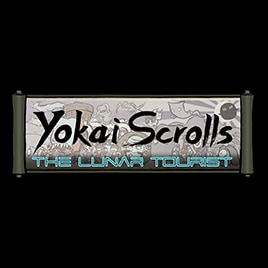 Hello Steam community! We hope you like what we're working on here, and to give you a little more in depth look at how it works in practice we've put up a *pre-alpha* demo you can download and play for free. Please note that as a *pre-alpha* build, not all of the core features are implemented yet -- we're still in development and are looking for as much feedback from our potential audience as we can get! We have hidden 5 vending machines in the demo, see if you can find them all and collect the codes!

We are in the middle of a Kickstarter campaign as well, so please check out our page and share or back us if you want to see the full version come to life!

Read More
Description
Release date: Fourth quarter 2016
Are you interested in Japan? Do you like RPG's from the SNES era? How about Strategy games? If you happened to answer "yes" to more than one of those questions, this game is for you.


OVERVIEW:
A Credible Tale of Yokai, Robots, and the Lunar Tourist is an action-rpg/strategy game inspired by classics like Secret of Mana, Chrono Trigger, and Legend of Zelda. During the day, you will explore a beautiful 3D world set in classic Japan with a group of up to three heroes, searching for precious resources or hidden treasures while villagers work to construct buildings, defenses, and traps of your design. When night falls, hordes of terrible yokai (Japanese spirits or demons) will attempt to invade the town. Your primary objective will be to protect a mysterious baby girl named Kaguya, but you will also need to make strategic decisions about how to protect your villagers and resources.

FEATURES:
Protect Your Village
In A Credible Tale, you build and explore during the day and defend your village at night. Yokai invade your town when the sun goes down, so you will need to set traps, build defensive towers, and rely on your own combat skills to fend off the enemies. Each type of yokai is unique, with specific objects and resources they are either (a) attracted to or (b) repelled by. You can use this to force them to take certain paths in order to defeat them. Some types of yokai will only show up if you have what they like, so you will need to carefully consider the risk of stockpiling unused resources.

Explore the World
Once you're out in the wild in A Credible Tale, you will find precious materials for building and crafting -- as well as hidden treasures, boss lairs, and more! Explore carefully though; you can only carry a limited amount of supplies. You will not be able to adventure indefinitely; you'll need to make it back before dark to defend the village. In addition to the treasures waiting to be found, the wilderness is also home to many crafty yokai who may disguise themselves to trick you!

Build and Craft
Build towers and traps using a flexible interface that allows you to make your own designs from parts. Each part will be individually subject to in-game physics -- which means that when buildings are inevitably destroyed, the collapsing parts themselves can damage enemies! Your design choices will determine the functional use of a building, its resilience to damage, and how it will behave when it collapses... or explodes!

Enhancing your village infrastructure will empower your heroes and attract new villagers. This is how you "level up" in the game. Especially skilled villagers can craft a wide variety of items with which to equip your heroes, in addition to parts you can use for your structures.

Combat
Combat is heavily inspired by Secret of Mana, with several unique weapon types and unarmed combat styles that each feature their own set of powerful charge attacks. For further customization, each hero will be equipped with weapons, armor, and accessories in addition to selecting an active and a passive skill. Certain skills will be acquired as you progress through the story or equip certain items. Your choices will create numerous unique builds with different combat styles.

You won't be fighting alone, though. Up to three heroes may be in your party at once -- controlled by the A.I. or by your friends through local multiplayer. With the wide variety of builds available for each hero, there will be tons of synergies just waiting to be discovered. Specific combinations of heroes with certain skills and charge attacks can unlock massively powerful, secret special combo attacks!

Study Japanese
We love Japan, and we want other people to love it too. Accordingly, we've included elements from tons of classic stories like Tale of the Bamboo Cutter (竹取物語) , Peach Boy (桃太郎) , and many others throughout the game. But we want to do more than just share stories, we want to help our players develop skills and knowledge that will eventually empower them to experience Japan the way each of us has experienced it.

We're not Japanese language teachers, but we've spent much of our lives as Japanese language students. We don't intend this game to be a substitute for a legitimate language classroom, and we also understand that studying Japanese is not something everyone who plays this game will want to do. With these considerations in mind, we've created two optional systems to help you study Japanese language while you play:

Story
One fateful night, Hiro is sleeping soundly when he is awoken by a mysterious voice in his head telling him to get up and go find a child in the woods. Upon arriving at the specified location, he finds the child inside a strange pod and takes her back to the village. But trouble follows the child -- and soon Hiro finds himself in the middle of a conflict between humans, gods, supernatural yokai, and ancient astronauts as part of a struggle that will determine the fate of the universe.

Garlic Jr. Oct 10, 2015 @ 12:23pm
the only thing i disapprove of, is that the background settings all seem a bit sparse. maybe some more detailed work to add a better touch of a living world would spice it up some more.

@samcsss Sep 29, 2015 @ 3:53pm
How awesome! A game based on Japanese folklore that helps you learn Japanese. Now I won't need to feel guilty about playing games when I should be studying Japanese

Ralkodu Sep 29, 2015 @ 10:59am
I would love to play this game to help learn my Japanese and would love to back the Kickstarter if I was able to. I really hope this gets through.