Greenlight > Games > Shy Kids Club's Workshop
Greenlight is being retired. For more information on how to submit games to steam, refer to this blog post.
This item has been removed from the community because it violates Steam Community & Content Guidelines. It is only visible to you. If you believe your item has been removed by mistake, please contact Steam Support.
This item is incompatible with Greenlight. Please see the instructions page for reasons why this item might not work within Greenlight.
Current visibility: Hidden
This item will only be visible to you, admins, and anyone marked as a creator.
Current visibility: Friends-only
This item will only be visible in searches to you, your friends, and admins.
The Incredible Journey of You and I
Description Discussions0 Announcements1 Comments66 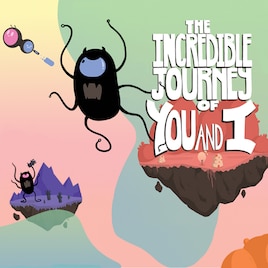 We will be exhibiting at PAX Aus this weekend in the pax rising pavilion! We would love for anyone going to stop by and give our demo a whirl. We would also love feedback and to say hi to you all.
Hope to see you there!
-Nic and Craig

Read More
Description
The Incredible Journey of You and I is an adorable and crazy two player couch co-op.
Both players have control of opposite halves of a ship and will swap roles as they dart in and out of the sky and sea.
Players must figure out how to work together to save their home planet from those dang monsters that smashed the joint!

This game is all about communication, movement and co-operation, so get ready to grab a player two and start yelling!

Gameplay
Since the ship is made from two different elements, it will react differently to the surrounding environment. When you are in the air, the pink player will control where the ship will fly, the blue player will shoot blue bullets. When you fly into water, the controls swap and the blue player takes control over flight and the pink player takes control over shooting, and will shoot pink bullets.
The different colour bullets will affect monsters and the environment differently so you both have to figure out who does what.

The game is currently being developed to be played with gamepads.

Zornhau Nov 3, 2015 @ 4:31pm
Saw this at PAX Aus, it looked great. I love the idea of the two player co-op, I think the game will appeal to a lot of people because of that feature.

Shy Kids Club  [author] Nov 3, 2015 @ 4:38am
We had an amazing time at PAX Aus! A massive thank you everyone who came by to play our game! We appreciate your invaluable feedback and we're looking forward to shaping the game around what people loved.