Greenlight > Software > XaeroX's Workshop
Greenlight is being retired. For more information on how to submit games to steam, refer to this blog post.
This item has been removed from the community because it violates Steam Community & Content Guidelines. It is only visible to you. If you believe your item has been removed by mistake, please contact Steam Support.
This item is incompatible with Greenlight. Please see the instructions page for reasons why this item might not work within Greenlight.
Current visibility: Hidden
This item will only be visible to you, admins, and anyone marked as a creator.
Current visibility: Friends-only
This item will only be visible in searches to you, your friends, and admins.
J.A.C.K.
Description Discussions1 Announcements2 Comments129 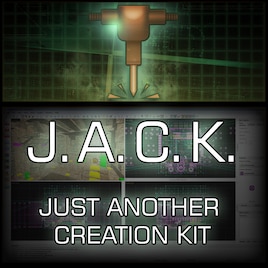 XaeroX
Offline
See all 4 collections (some may be hidden)

Today we release the last pre-Steam version, JACK 1.1.1064, with more bugfixes and improvements, both for Windows and Linux. Further, there will be two versions of the editor: the Steam one, commercial, with SteamWorks features and automatic updates, and non-Steam, completely free, although updated not very often. If you experienced critical problems with older versions, don't hesitate to update!

Our development team wishes you Merry Christmas and a Happy New Year! As a Christmas gift, we release a new version, JACK 1.1.855, both for Windows and Linux. There are not so many features added, but we believe that all of them are of vital usefulness! As usual, we did our best to improve stability and functionality of the editor, fixing lots of errors and granting your requests. If you experienced critical problems with older versions, don't hesitate to update!

Read More
Description
Release date: Q4 2016
What is J.A.C.K.?
J.A.C.K. (Just Another Creation Kit; previously known as Jackhammer) is a brand new level editor for games with a quake-style BSP architecture. The aim is to develop a convenient cross-platform tool capable of incorporating the best features of existing editors, such as Valve Hammer Editor, Q3Radiant and others. Despite Quake and Half-Life having been released a long time ago, the large community have arisen around, still developing mods and games on their bases. However the existing editors suffer from fundamental disadvantages their users are well familiar with. J.A.C.K. does aspire to be the universal level design tool for classic games. But not only the classics! The editor evolves, there are plans to support Source Engine and Unity.

J.A.C.K. is being developed since August 2013. Despite not all the ideas being implemented and not all the functions being completely error-free, you are already able to download almost fully functional version of the editor, install and evaluate J.A.C.K. in action.
Popular Discussions View All (1)

Momo Nov 24, 2016 @ 5:01am
Also, as -vG- Lemon said:
"Jackhammer is a great editor, and its multi-use ability puts it above par of its competitors (sledge editor, VHE), but I find it's lacking three main things, however.

1) 3D Manipulation of Geometry
In Hammer editor 4.1, pressing 'x' in the 3D view allows you to resize blocks in that window, as well as perform vertex manipulation actions.

2) Copy and pasting onto the mouse location
As it stands now, all pastes seem to go up and to the left of their original copy. To paste directly where the cursor is positioned, both in 3D and in 2D views, would be an incredible boon to mapping efficiency.

If these were implemented and game support was extended further (To source era games, perhaps?) I'd definitely throw a few bucks this way."
With these features, JACK would be better than Hammer in every way! And with Steamworks, it would be amazing!

Yeah I'm looking at you HammUEr...

XaeroX  [author] Aug 18, 2016 @ 10:41am
Don't worry, for those people who doesn't want to financially thank the author for years of hard work, there always will be a free version available, just like now. Although it will miss some steam-specific features.

λxool Aug 17, 2016 @ 3:41am
Bit f misunderstanding here, I use JACK because it is better than hammer. But If it become paid, I think that I'm gonna get back to hammer.

J.A.C.K. has been Greenlit and is now listed in the Steam store. For the latest information, purchase options, and discussions for J.A.C.K., please see it on the Steam Store or in the Steam Community.
Visit Store Page
For more details Visit Community Hub
For latest discussions
If you really, really want to, you can continue to the Greenlight page. Information on this page may be out of date, since all the action has moved to the areas noted above.