Advanced Scoreboard - How to create professional looking GOTV streams and demos
By saSha
If you have a private server where you run matches and are streaming GOTV or just recording demos, and want it to have a more professional look, you're at the exact right guide.

Comments
Overview
Hey guys!
In this guide I will explain to you how you can make your GOTV stream or demo make look more professional. You will learn how to setup:
everything being visible on the scoreboard.

That will be all visible for viewers of the GOTV stream or demo.
Team Names
Team names are the easiest thing to set up in the scoreboard.

These convars can be used with a string to set the team's name.

Don't forget to put the name in quotations as the input is a String.

Also little hint: The number 1 always refers to the CT team, or if you're looking from the spectator perspective, the left team. Keep that in mind for the following commands!
Team Flags
Team flags are just as easy to set up in the scoreboard.

These convars can be used with a country's alpha 2 code to set the team's flag.

For all official alpha 2 codes you can refer to here: Click![en.wikipedia.org]

Don't forget to put the alpha 2 code in quotations as the input is a String.
Team Logos
Use of standard logos
The use of team logos is still basically easy, it's just getting a little more complicated when we want to use custom logos, as the logos are unfortunately client-sided.

This command is used with .png files of the team which can be found in the pak01_dir.vpk. The logos in the vpk are in the following path:
\csgo\resource\flash\econ\tournaments\teams

To save you some time, here are some of the common logos used in official pro matches
Click![gist.github.com]

Use of custom logos
In order to use custom logos you must set up the following path in your server's directory:
...\csgo\resource\flash\econ\tournaments\teams

There you can paste 64x64 .png logos which can be used on the server the same way as the standard logos, depending on how you call them. Obviously png transparency is supported.

There is one issue. In order for GOTV viewers and players to see the logos, they need to have them saved on their computer in the same csgo directory as in the server.

If you have for example uploaded corey.png to the server but you don't have it in your own csgo directory, you will not be able to see the team logo. That also applies to anyone else.

In my case for example I would need to put corey.png in my csgo directory, which would be D:\Steam\SteamApps\common\Counter-Strike Global Offensive\csgo\resource\flash\econ\tournaments\teams.

To manage the automatic client downloading of the logos, you can use this sourcemod plugin:
Click![forums.alliedmods.net]

Important note: The name of the .png file is not allowed to be longer than 5 characters!
Best of x series information
This cvar enables to show information regarding a Best of series, like how much maps can be played and the amount of maps a team already won.

In this BO3 example, the team on the left hand side of the spectator GUI has won 1 map and the other team 0.

Match Statistics
Now you will learn how to set up and show additional match statistics on GOTV.
These statistics usually show up at the start of a round for 5 seconds default.

All 3 convars are used with a String.

Don't forget to put the information of the convars in quotations as the input is a String.

There is an additional convar which defines how long in seconds the match stat (also applies to mp_teamprediction) is shown.
mp_teammatchstat_holdtime
The default value is 5
Match Odds
Additionally to extra match stats you can also display the odds for each team.
Just as match stats, the odds are shown for a default time of 5 seconds at the start of each round.

The first convar is again used as a String to describe which kind of odds you're displaying (for example "HLTV Odds"), while the second convar sets the percentage for the left team. The odds for the right team are calculated automatically.

Server Graphics
Last but not least we are coming to the server graphics which are mostly used to show off sponsors and stuff. Unlike the team logos the graphic only needs to be saved on the server and not at the client too.

The first graphic must be 360x60 and the second 220x45. Both are required to be less than 16kb. You have to put your image files in the root directory of the csgo server, so basically just .../csgo/
Just as with logos, png transparency is fully supported.

In order to show you where the graphics will be displayed, I have taken an example screenshot from the ESL ESEA Pro League Dubai. 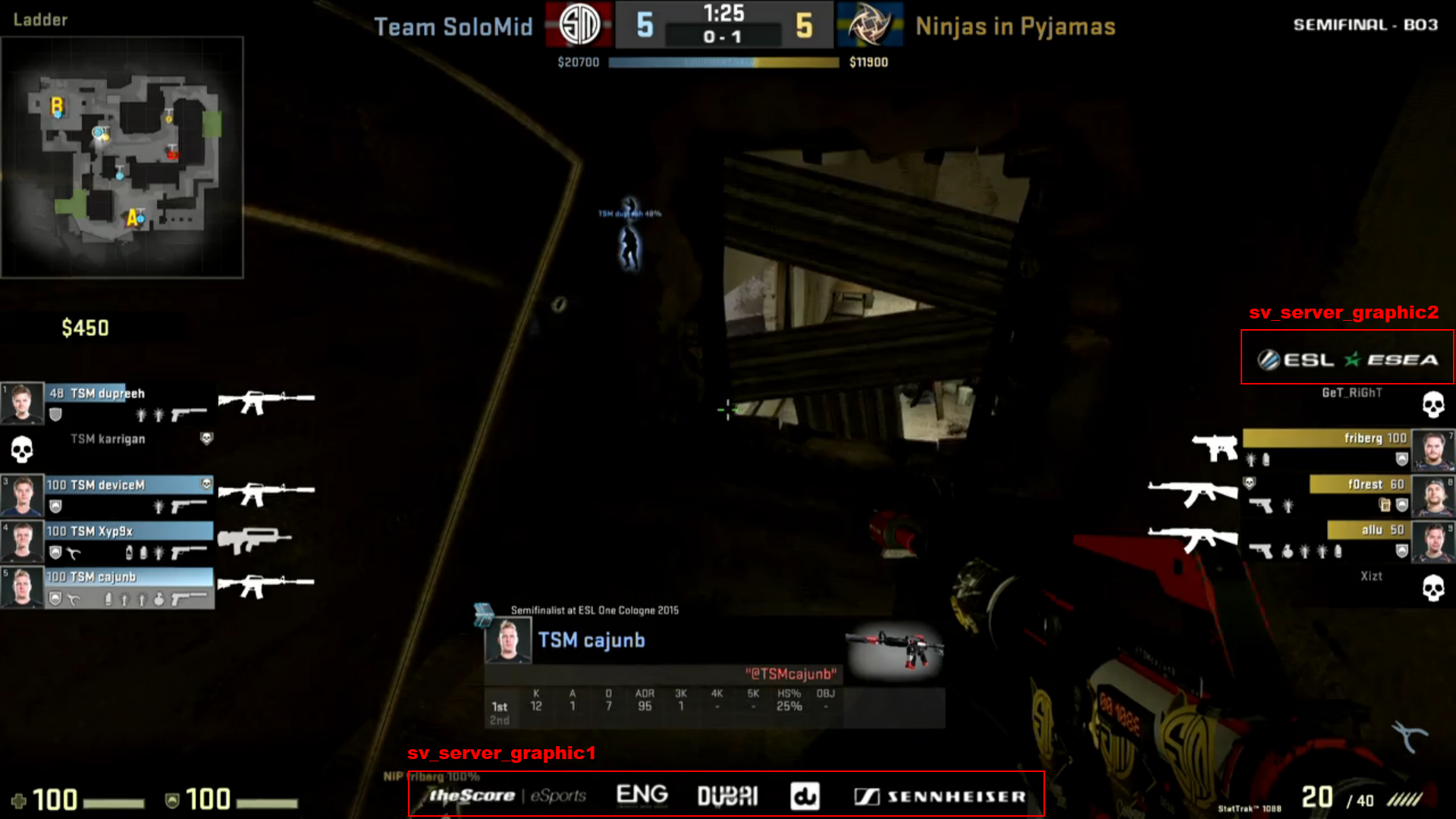 It seems important to add the ".png" behind the filename, at least it didn't work without it for me.
Video instructions
Additional notes
I also have a guide on how to create a 5v5 match on a dedicated server with eBot for free.

Your team is looking for a nice and professional looking logo or you just need a new personal avatar? Then you should check out https://www.modurist.com/ for professional logo designs for eSports orgs, teams and gamers.

Support me
If you want to support me in any way you can do this by upvoting my workshop or donating so I can keep my CSGO server running. You can also follow me on Twitch[www.twitch.tv].

Baardie Jun 6, 2020 @ 6:59am
mp_teamprediction_txt doesn't seem to be working at all for me. Always showing 'pickem predictions' for me. Any solution?

NiceKype May 4, 2019 @ 2:04pm
Okey i maked a mistake. I used png and not svg. But the banner still dont work and the flags dont work. Do you have a answer for that? But you can add and write me shortly for that, if you want :)

NiceKype May 4, 2019 @ 1:38pm
Hay, can you help me? Flags dont working, GOTV Banner dont work but its definitly correct and we can see our custom logo ONLY in gotv but in the Scoreboard and not in the winner team window. And not with the team logo manager