Greenlight > Concepts > cinnomangames's Workshop
Greenlight is being retired. For more information on how to submit games to steam, refer to this blog post.
This item has been removed from the community because it violates Steam Community & Content Guidelines. It is only visible to you. If you believe your item has been removed by mistake, please contact Steam Support.
This item is incompatible with Greenlight. Please see the instructions page for reasons why this item might not work within Greenlight.
Current visibility: Hidden
This item will only be visible to you, admins, and anyone marked as a creator.
Current visibility: Friends-only
This item will only be visible in searches to you, your friends, and admins.
MODSORK
Description Discussions0 Announcements7 Comments13 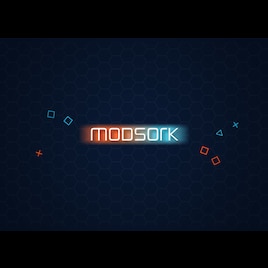 You can now vote for MODSORK ( ...again. but this time your votes count xD ). Your support is really appreciated!

Future updates and announcements for the game will be posted on the proper Greenlight page (this here is Greenlight Concepts).

This week brings a premiere: The game will be playable at the same time at two events in two different countries. Kinda fitting for a game about doing two things simultaneously, don't you think? :) The events are the Indie Prize Showcase in Amsterdam and the Central European Game Coference in Vienna ( thanks to my friends from Couch Developers for making that possible!)

Among other things, there's a brand new defensive player ability in the game now, an EMP blast you can use to temporarily stun all the frenemies. The first one's free, but following ones come at an increasing price: they cost more and more of your multiplier, so use only in emergencies! :)

Read More
Description
A Game about Connecting People. With Lasers.

MODSORK is a very challenging game where you control two buddies at the same time. Grumpy frenemies spawn everywhere and your buddies can give them energy hugs to make them burst with joy (and, more importantly, score points).

Player Quotes:
"It's a bit like trying to rub your tummy and tap your head at the same time. With explosions."
-Anonymous (CinnomanGames may have added the bit about explosions...)

Silly Sacha May 22, 2016 @ 1:30pm
Tested at Stunfest this weekend. Great idea, very promising, mindfucking controls. I hope I'll play it again one day on Steam, maybe I will be able to master the controls

RicoAlbe Oct 7, 2015 @ 3:08am
I tried this game at Madrid Games Week and almost completely abandoned my own booth just to play this.

It might look confusing on video and it definately does on screenshots, but after playing it for a minute you're for ever absorved. It will break your brain apart into a million pieces, but it'll be worth it.

Get it on Greenlight proper so we can vote for it!

Yann Sep 30, 2015 @ 2:48am
Fantastic concept, held the high score for a couple of hours one morning at EGX. Love its simplicity and applies especially well as a single controller local co-op game!

BuggleBean Sep 29, 2015 @ 1:25pm
Played this at EGX and loved it. Challenging game with great design and sound. We played the multiplayer and it was really addictive! Looking forward to more :)

LMDevlin Sep 28, 2015 @ 1:31am
Played at EGX in Birmingham yesterday, was lots of fun and has a simple yet visually pleasing asthetic. I can see this being very addictive as it is so easy to start over every time you lose! Easy to learn but difficult to master.
< >