Store Page
ARK: Survival Evolved>  Workshop > MashhitDK's Workshop
This item has been removed from the community because it violates Steam Community & Content Guidelines. It is only visible to you. If you believe your item has been removed by mistake, please contact Steam Support.
This item is incompatible with ARK: Survival Evolved. Please see the instructions page for reasons why this item might not work within ARK: Survival Evolved.
Current visibility: Hidden
This item will only be visible to you, admins, and anyone marked as a creator.
Current visibility: Friends-only
This item will only be visible in searches to you, your friends, and admins. 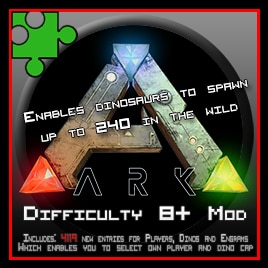 MashhitDK
Online
See all 787 collections (some may be hidden)

This item has been added to your Subscriptions. Some games will require you to relaunch them before the item will be downloaded.
Description
What does this mod do?
What exactly has been edited?
5 values in total across 2 files have been edited

Known issues?
Note: No engrams added to this version... but you'll still get 50 for level 81 and 1 engram point for each level above that

Will it work with other mods?
Yeah... this does however (might) require to be loaded as first priority to work
but the mod will stack with all functional mods that doesn't tamper with and/or messes up core system files...

You sure this is working? I can't find any dinos that are that high level
It's confirmed working both locally (/in single player) and on server...
Keep in mind this doesn't change you're already tamed dinos and/or the wild dinos that where there before added... only fresh spawns... so it might take some time to find them... but they should be there if it's loaded
You can always try to spawn a Dodo with; cheat summon Dodo_Character_BP_C
You should be able to spawn higher level the normally within the first few tries

Does this require server wipe?
No... doesn't require a wipe...

Will there be any issues if I decide to remove this at a later point
No... you dinos and levels will still be there after this is removed...
Note: Remember to do backup just in case

What servers are running this mod?
See and/or add your server here

I'm running this mod, could I please be added to the list above?
Yeah... feel free to post your information here

When will this be updated?
Still no eta. need new setup before I can do any editing
Planning on upgrading when the new threadripper CPU from AMD is out but not before...

So might still be a while... sorry...
Popular Discussions View All (11)

Domml May 18, 2020 @ 3:53am
Just for the notice of everyone:
This mod is abandoned. It was updated literally a little more than 4 years ago and Wildcard made changes to the difficulty settings, effectively making this mod obsolete.
You can read about how to set up the new difficulty settings here: https://ark.gamepedia.com/Difficulty

MashhitDK  [author] Dec 28, 2018 @ 1:41am
I need help with getting read/write from .ini working... for easier setup... and more customization so that one mod can do what all the different ones did with simple settings.

crighton Sep 6, 2017 @ 7:22pm
Hi MashhitDK, Since Ark has been released, and Threadripper is out are you planning on updating the Mods for the latest content ? Thanks