Greenlight > Games > Red Cloak Games's Workshop
Greenlight is being retired. For more information on how to submit games to steam, refer to this blog post.
This item has been removed from the community because it violates Steam Community & Content Guidelines. It is only visible to you. If you believe your item has been removed by mistake, please contact Steam Support.
This item is incompatible with Greenlight. Please see the instructions page for reasons why this item might not work within Greenlight.
Current visibility: Hidden
This item will only be visible to you, admins, and anyone marked as a creator.
Current visibility: Friends-only
This item will only be visible in searches to you, your friends, and admins.
Wanderer
Description Discussions1 Announcements1 Comments175 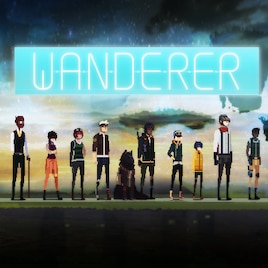 Wow, just wanted to give a giant thank you to everyone who's shown their support here on Greenlight and KS! Thanks to you, we've officially gotten greenlit in just a week! Incredible! :D

If you haven't yet, be sure to head over to the KS page for more info on the game:
https://www.kickstarter.com/projects/1231806848/wanderer-2/description

Again, a giant thanks for the very warm reception guys, we couldn't do this without you!

Read More
Description
Release date: September 2016
Wanderer is a 2D, lo-res Sci-fi cinematic platformer/adventure game that tells the tale of a man called Rook, a greying convict who wakes from cold sleep aboard a massive orbital prison facility to find that it's crash landed on the ruins of an abandoned Earth. With the guidance of a hacker named Jin and the aid of a ragtag group of survivors he recruits along the way, Rook must locate and explore the nine cell blocks which have detached from the prison's central tower and scattered across Earth's ghostly wasteland.

Along his mission, Rook will run into allies and adversaries in the form of dangerous fellow prisoners and bizarre parasitic extradimensional beasts that haunt the dead planet. Core gameplay fuses platforming, pseudo-turn based combat, puzzle solving, and interactive dialogue/decision making into a story driven, atmospheric experience. Tying it all together is a unique visual aesthetic that merges lo-res pixel art characters with a lovingly hand-painted world.

Support us and get more details on our Kickstarter campaign:
https://www.kickstarter.com/projects/1231806848/wanderer-2
Popular Discussions View All (1)

CoolioAsh Feb 6, 2017 @ 6:51pm
either way i'm looking forward to it i just hope that you explain sometime what's going on

Audie_Murphy Apr 26, 2016 @ 6:16pm
I have to go with an up vote here. A combination of a few good genres wrapped in one. Nice work! Please check out our greenlight... http://steamcommunity.com/sharedfiles/filedetails/?id=321575571