Greenlight > Games > ParanoiaMan's Workshop
Greenlight is being retired. For more information on how to submit games to steam, refer to this blog post.
This item has been removed from the community because it violates Steam Community & Content Guidelines. It is only visible to you. If you believe your item has been removed by mistake, please contact Steam Support.
This item is incompatible with Greenlight. Please see the instructions page for reasons why this item might not work within Greenlight.
Current visibility: Hidden
This item will only be visible to you, admins, and anyone marked as a creator.
Current visibility: Friends-only
This item will only be visible in searches to you, your friends, and admins.
WaveCrash!!
Description Discussions0 Announcements4 Comments48 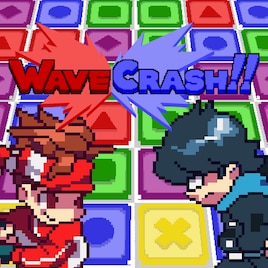 View WaveCrash!! in the store

Store page
Recent Announcements View All (4)
(Even Later) WaveCrash!! Update: Momoko Drops By To Do Ninja Stuff (Or Whatever...)
January 28, 2017 - ParanoiaMan

Oh man, it's been way too long since I last posted here. Sorry about that, ya'll. I have been continuing development on and off on WaveCrash!! since the last update, just been some delays with art and all the work I need to do to pay the bills getting in the way.

Anyway, a new Crasher has joined the roster since the last announcement: Momoko, the Part Time Ninja. She has the fastest movement speed of all characters and her special attack allows her to create a clone that attacks after a brief delay. This combination of traits let's her cover the field and overwhelm opponents with simultaneous attacks. You can check her out on the build at https://flyover-games.itch.io/wavecrash.

I'm hoping to have a build in good enough shape for an early access release soon and I will keep you posted.

Once again, a not very timely update! Just wanted to let ya'll know that Phoebe, the Indestructible Android, has been added to the WaveCrash!! roster. Her trait is ERROR_HYPE_UNDEFINED, which prevents her from gaining or using Hype Meter. Lame right? Fortunately, her Super, Overclock(), makes up for it! Overclock() gives her a movement and wave speed boost similar to Hype Mode as well as a protective shield that will absorb a hit. As always, you can find the latest build at https://flyover-games.itch.io/wavecrash.

Also, we have started to be more active on twitter, so if you want to keep up with us follow @flyover_games.

Read More
Description
Head-to-Head Puzzle Fighting Action!
Match blocks to send waves at your opponent! Dodge their waves or crash them head-on to survive. Unleash unique super attacks and your explosive Hype Mode to tip the scales. Its a back-and-forth struggle for arcade puzzling dominance!

Carefully plan your moves and swap blocks to devastate your opponent with precision or drown them in an unending tide of waves--the choice is yours! Even if you've never Popped a Puyo or Attacked a Tetris, just a minute on the sticks and you'll be crashing like a pro!

That Sounds Great! But, Really, How Do You Play?
It's simple! You move your character around the brightly-colored battlefield swapping pairs of blocks to make groups of 3 or more of the same color. Then, you can attack to send those blocks at your opponent in the form of a wave. Striking your opponent with a wave pushes the dividing line forward and claims more of the board for yourself. Once you've pushed the line forward three spaces, you win! If your wave misses your opponent, it creates temporary barriers that they can't pass through as a consolation prize. For a little extra spice, each character has access to a super attack they can perform by attacking with large block groups and Hype Mode which gives them a brief boost to their wave and running speed.

Free Demo Available Now!
You can find a free demo at http://flyover-games.itch.io/wavecrash. The demo contains two characters: the magical martial-artist in training Yo and the aloof psychic detective Seth! Let loose chi blasts and psychic barriers in a battle to the death! Or at least until one fighter falls over and doesn't feel like getting up again! The demo is local multiplayer only and supports keyboard and game pad input.

But What About the Full Version?!
Glad you asked! The full version would be much bigger than the humble demo we have right now. Final release features include:
< >
48 Comments

ParanoiaMan  [author] Sep 22, 2016 @ 4:36pm
@KrazyHelix I'm glad they liked it! I had a great time demoing it and I really appreciate the feedback.

KrazyHelix Sep 18, 2016 @ 5:26pm
my girls and I spent a lot of time playing this at MeggaXP this weekend and can't wait for it to be released. It was a fun and addicting spin on puzzle fighting.

Shin Hiryu Apr 15, 2016 @ 4:38pm
Wow I love this idea. Reminds me of Puzzle Fighter but this time you can actually control the character. Looks good. The only thing I don't like is the background but I know this game is on an early stage. I will buy when it releases!.

ParanoiaMan  [author] Jan 18, 2016 @ 8:52pm
@sarysa
Thanks for the kind words! Personally, I like a lot of arcade puzzle games but I understand how monotonous the genre can be for some folks. And thanks for feedback on the demo video. Making a proper trailer is on my to do list.

Also heads up, the patreon link at the bottom of this greenlight description is leading to a 404 page. Looks like there's a stray period in the url.

A Tree Jan 17, 2016 @ 8:42am
I can't believe I'm upvoting a match 3 game. This could reinvigorate the stale genre. The trailer's audio quality is a bit of a mess though, it has major gain boosting artifacts. Aside from that you guys have definitely stumbled upon something brilliant.

ParanoiaMan  [author] Jan 14, 2016 @ 9:28pm
@{ANS}Wolf1994
Yes! It currently supports keyboard and controller with the controller mappings based on the Xbox 360 controller. You can try out either set of controls in the demo available at http://flyover-games.itch.io/wavecrash .

WaveCrash!! has been Greenlit and is now listed in the Steam store. For the latest information, purchase options, and discussions for WaveCrash!!, please see it on the Steam Store or in the Steam Community.
Visit Store Page
For more details Visit Community Hub
For latest discussions
If you really, really want to, you can continue to the Greenlight page. Information on this page may be out of date, since all the action has moved to the areas noted above.