Store Page
Mad Max > Guides > sappy.ma's Guides
This item has been removed from the community because it violates Steam Community & Content Guidelines. It is only visible to you. If you believe your item has been removed by mistake, please contact Steam Support.
This item is incompatible with Mad Max. Please see the instructions page for reasons why this item might not work within Mad Max.
Current visibility: Hidden
This item will only be visible to you, admins, and anyone marked as a creator.
Current visibility: Friends-only
This item will only be visible in searches to you, your friends, and admins.

All Locations
By sappy.ma
Just a compilation of maps for every region in Mad Max. Should contain all locations of interest.

Deep Friah's Territory and The Dunes

Comments
Introduction
I wrote a little tutorial on how the ingame-map works. It's located at the end of the guide.
Refer to it if you need informations about a certain type of location. I hope it's helpful.

If you find anything that I missed, please let me know! 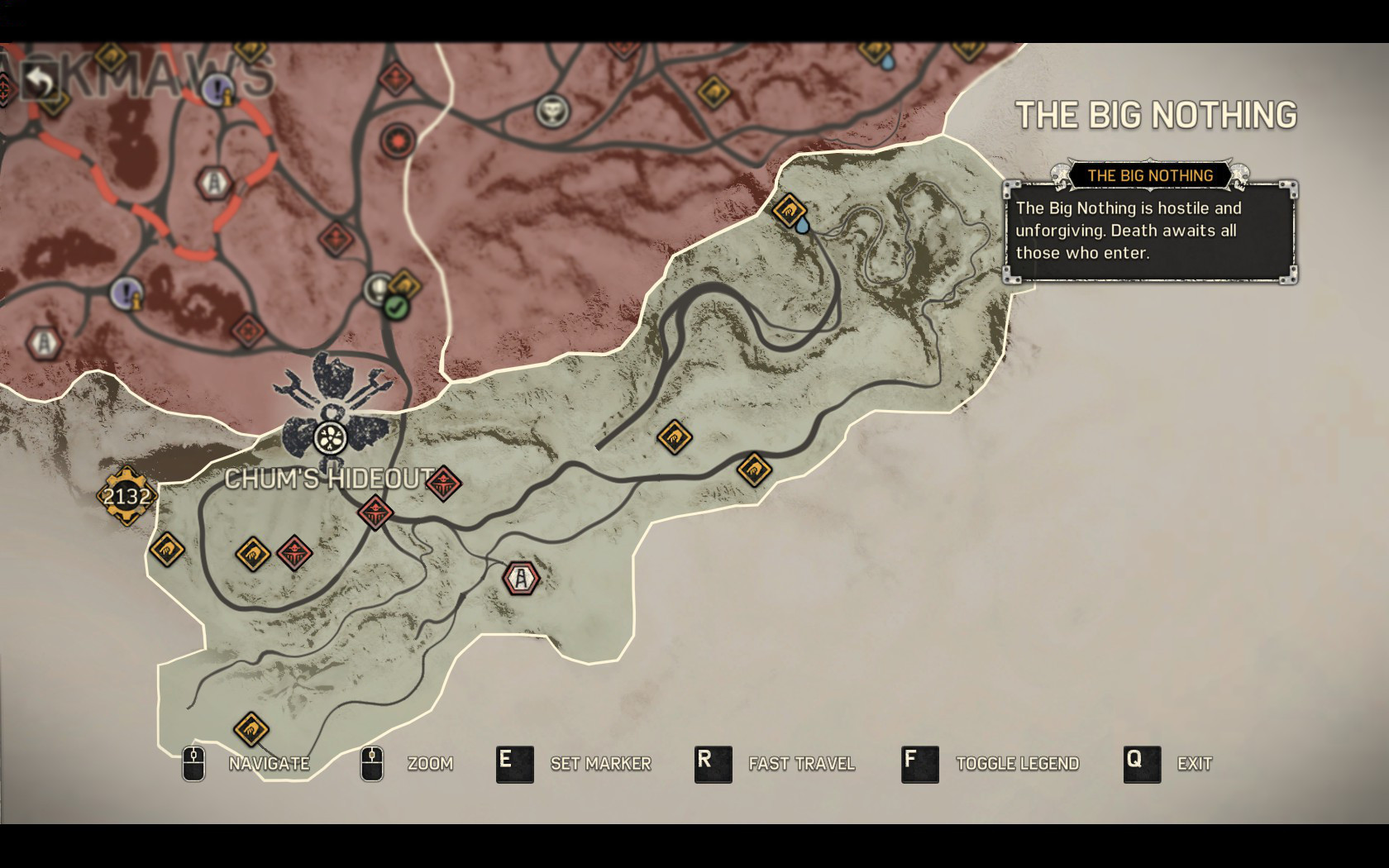 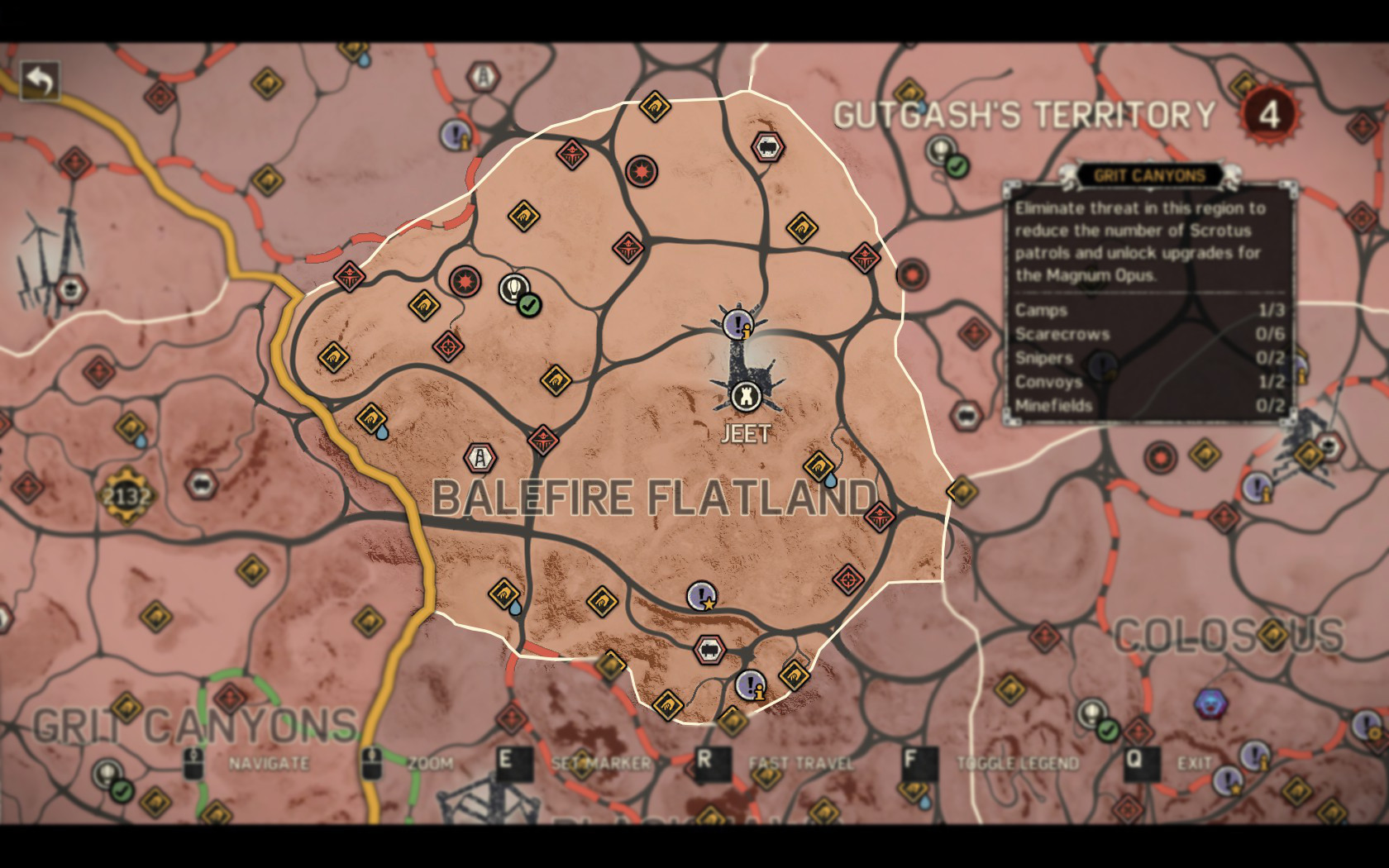 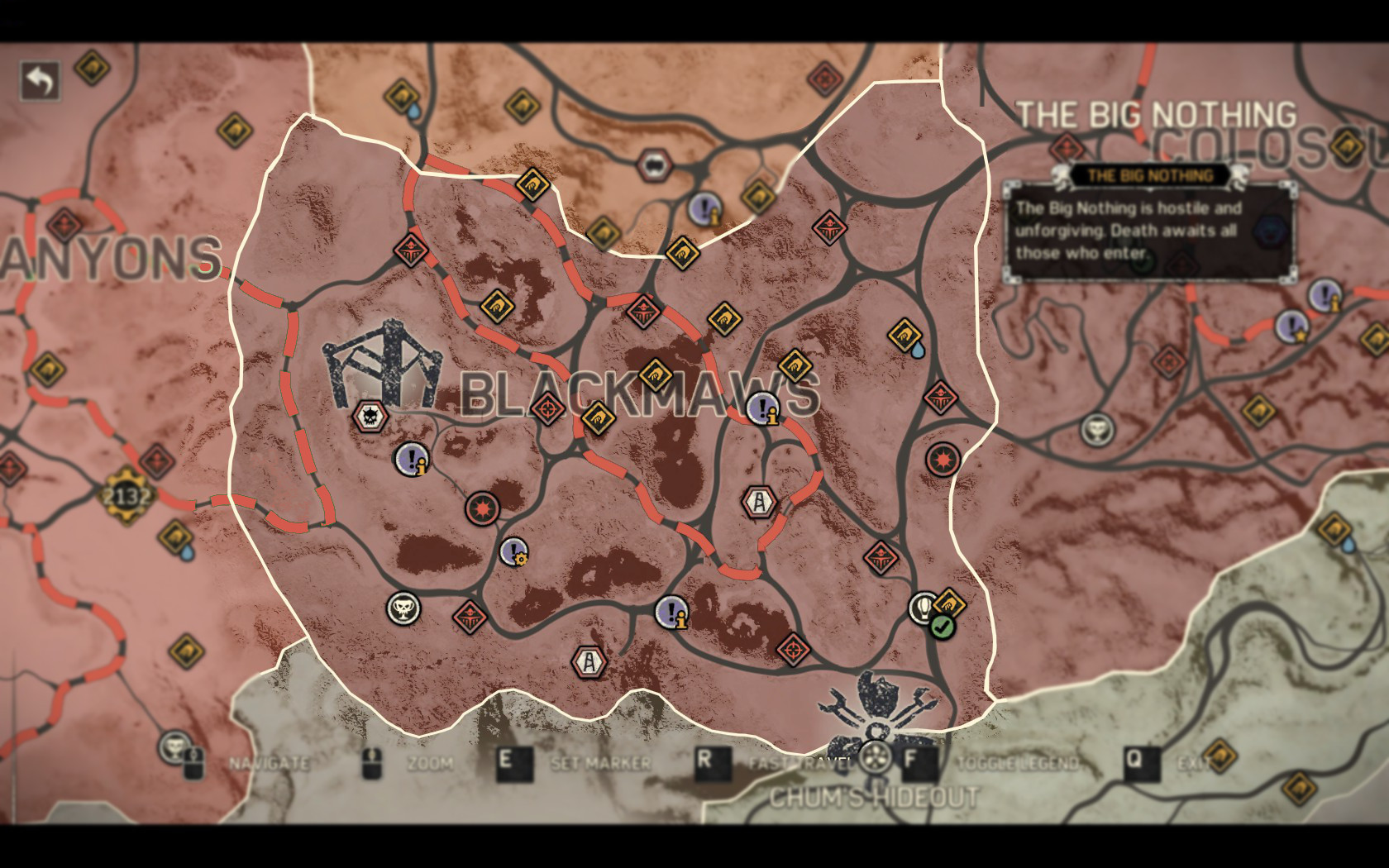 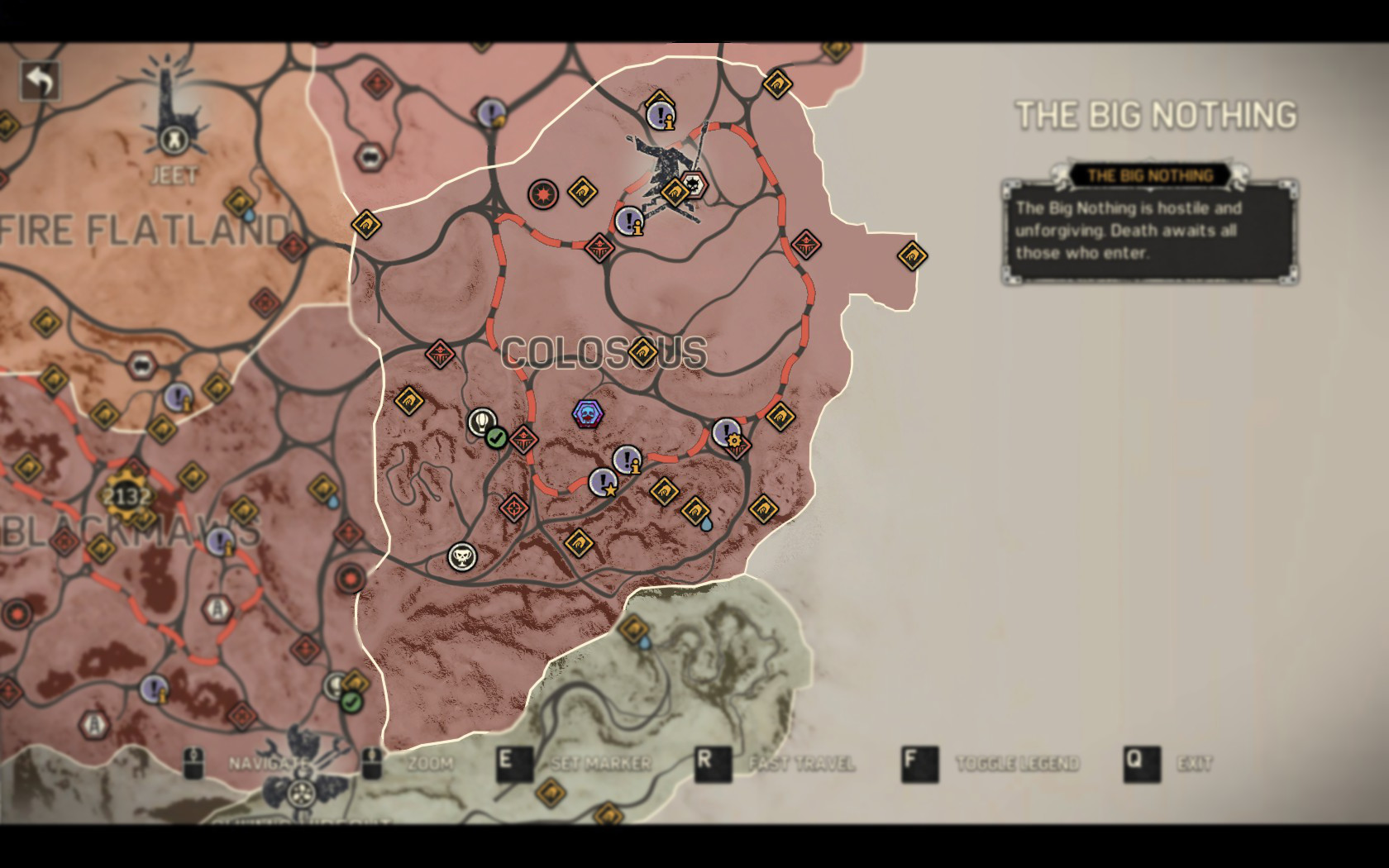 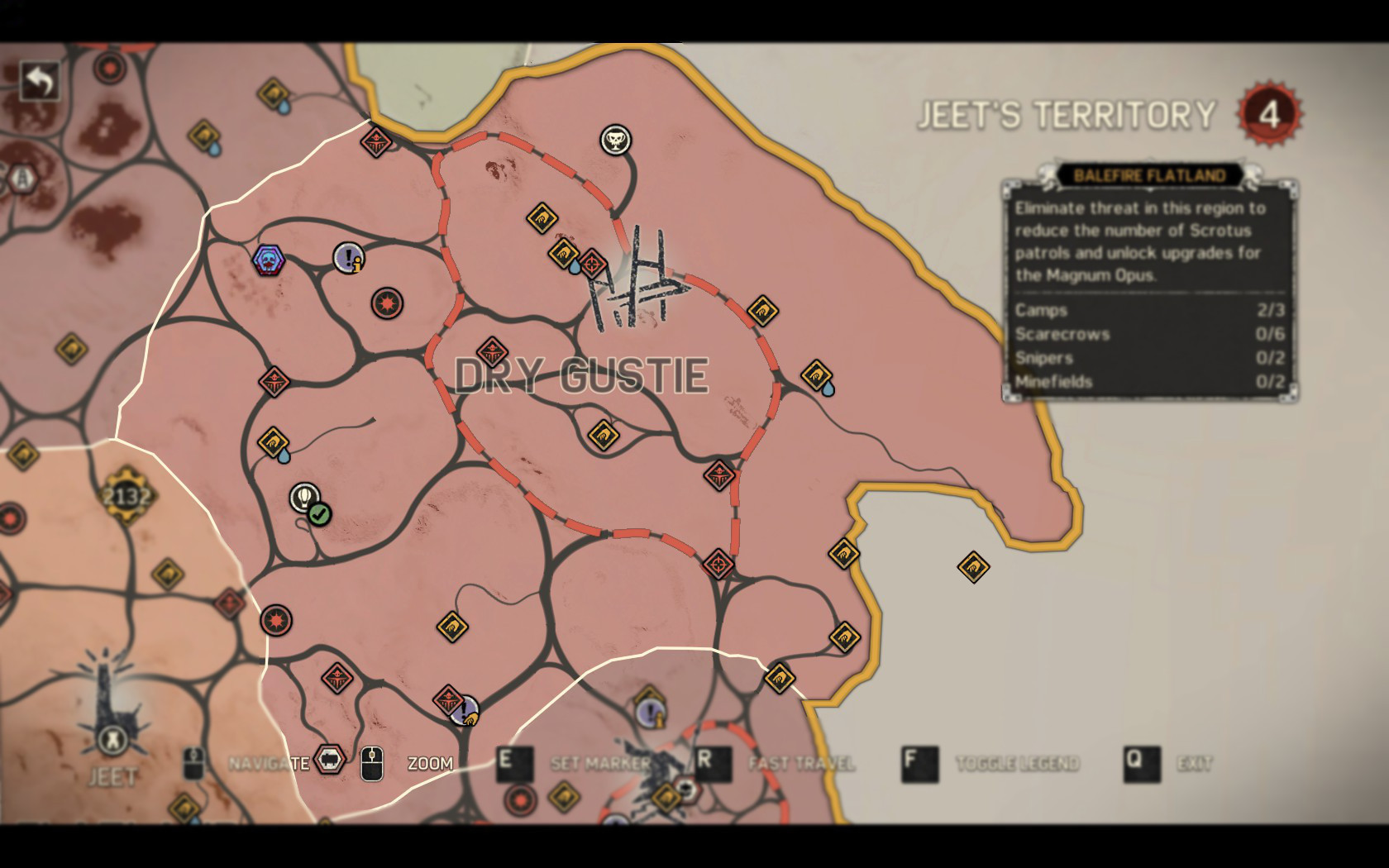 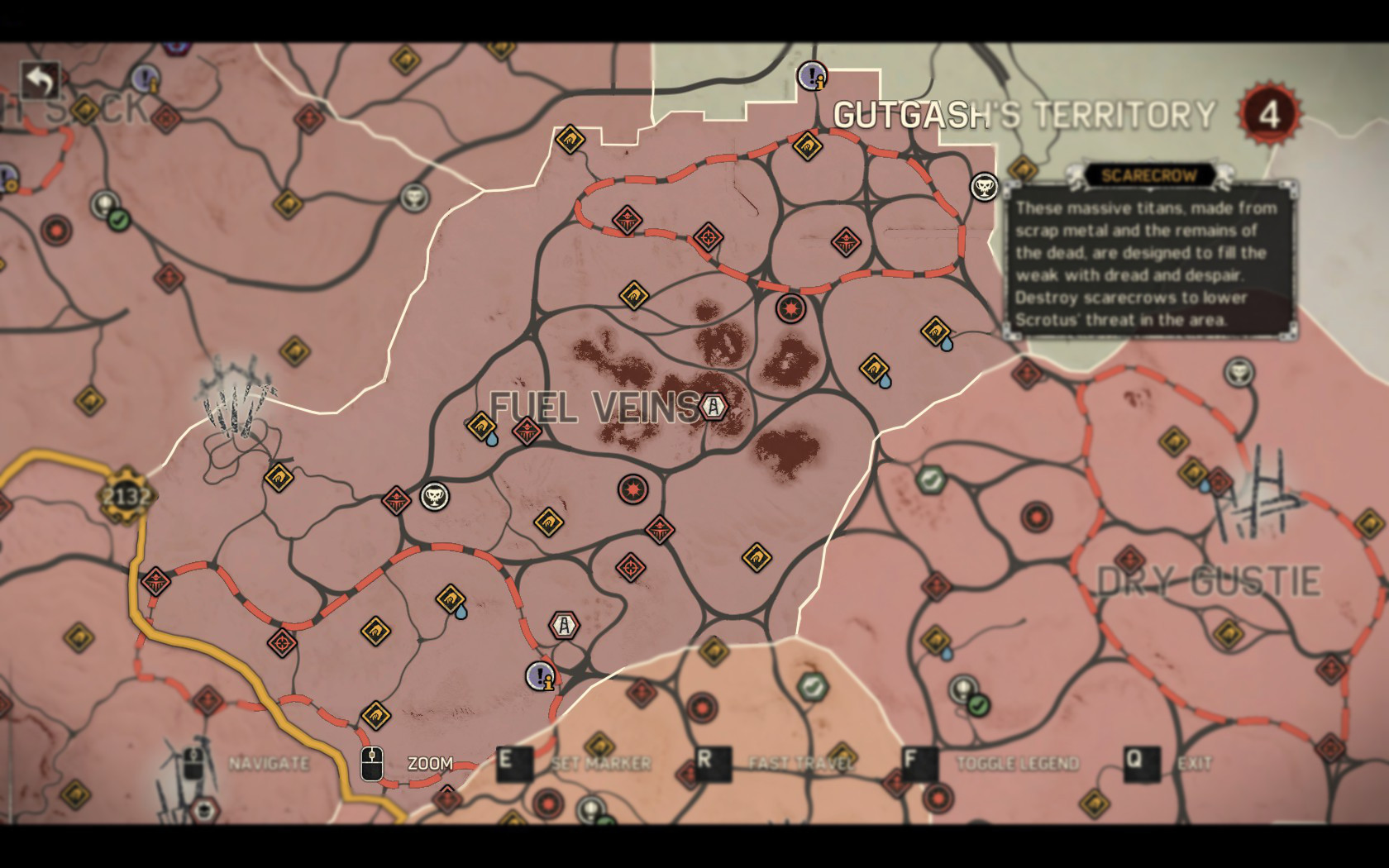 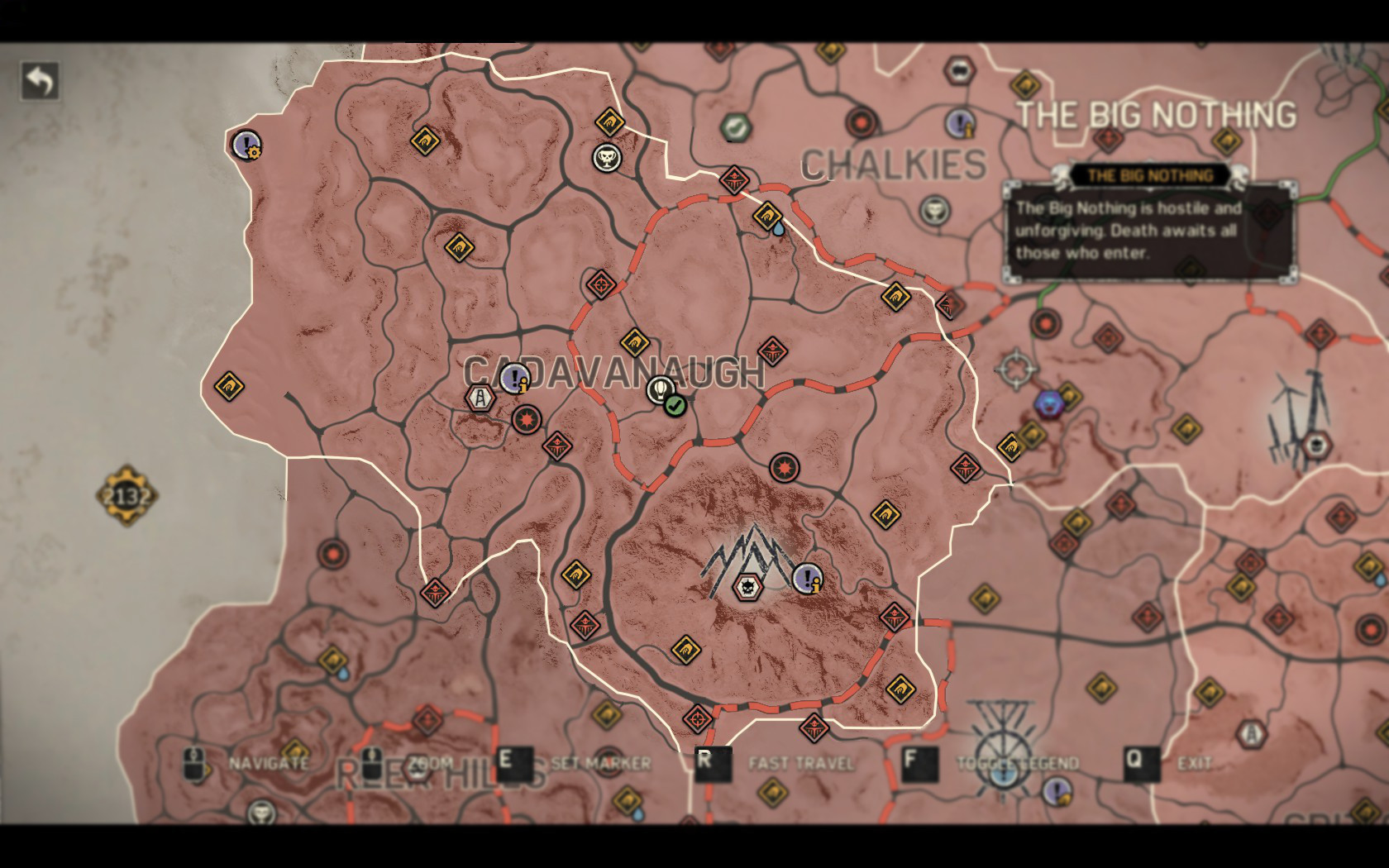 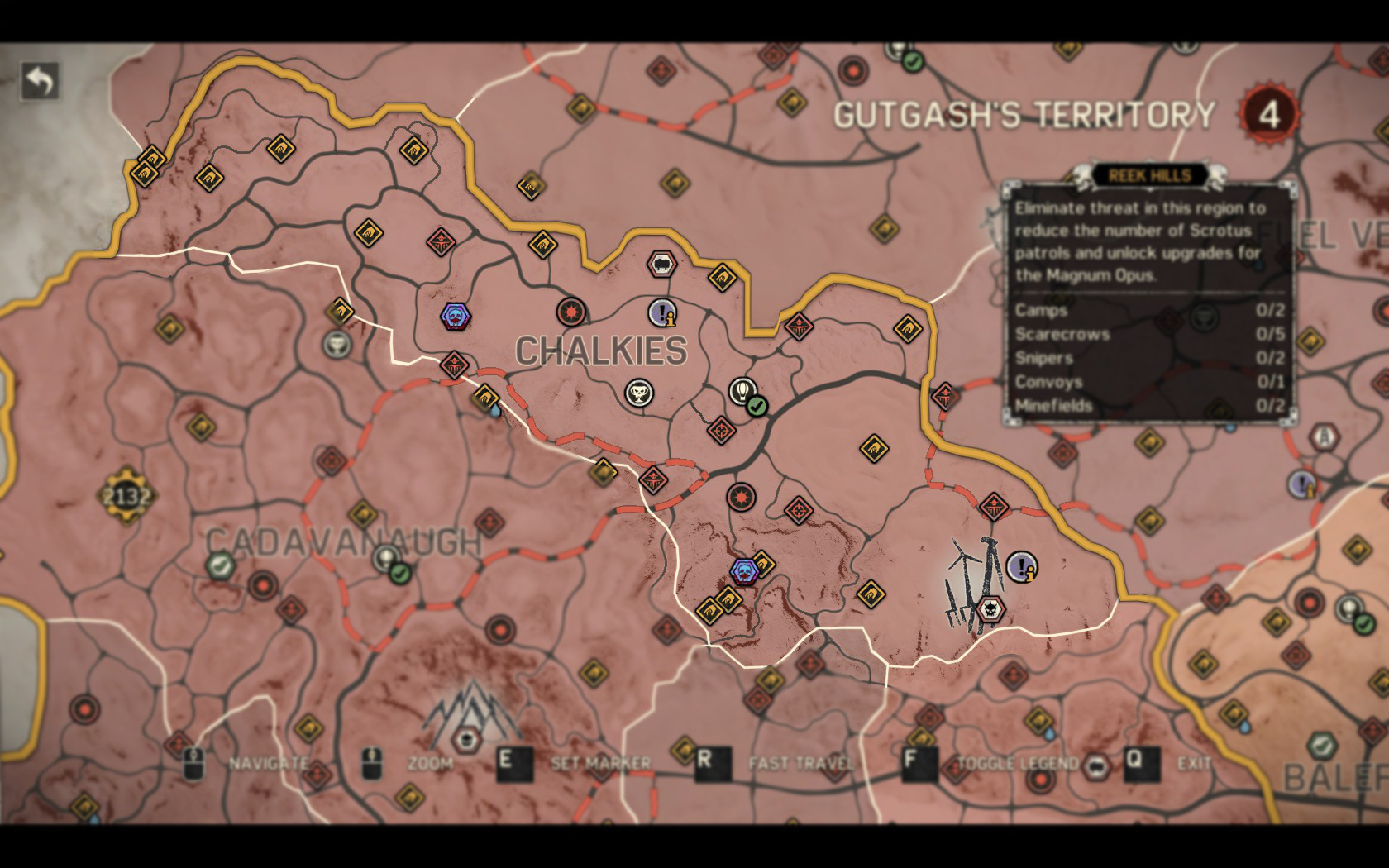 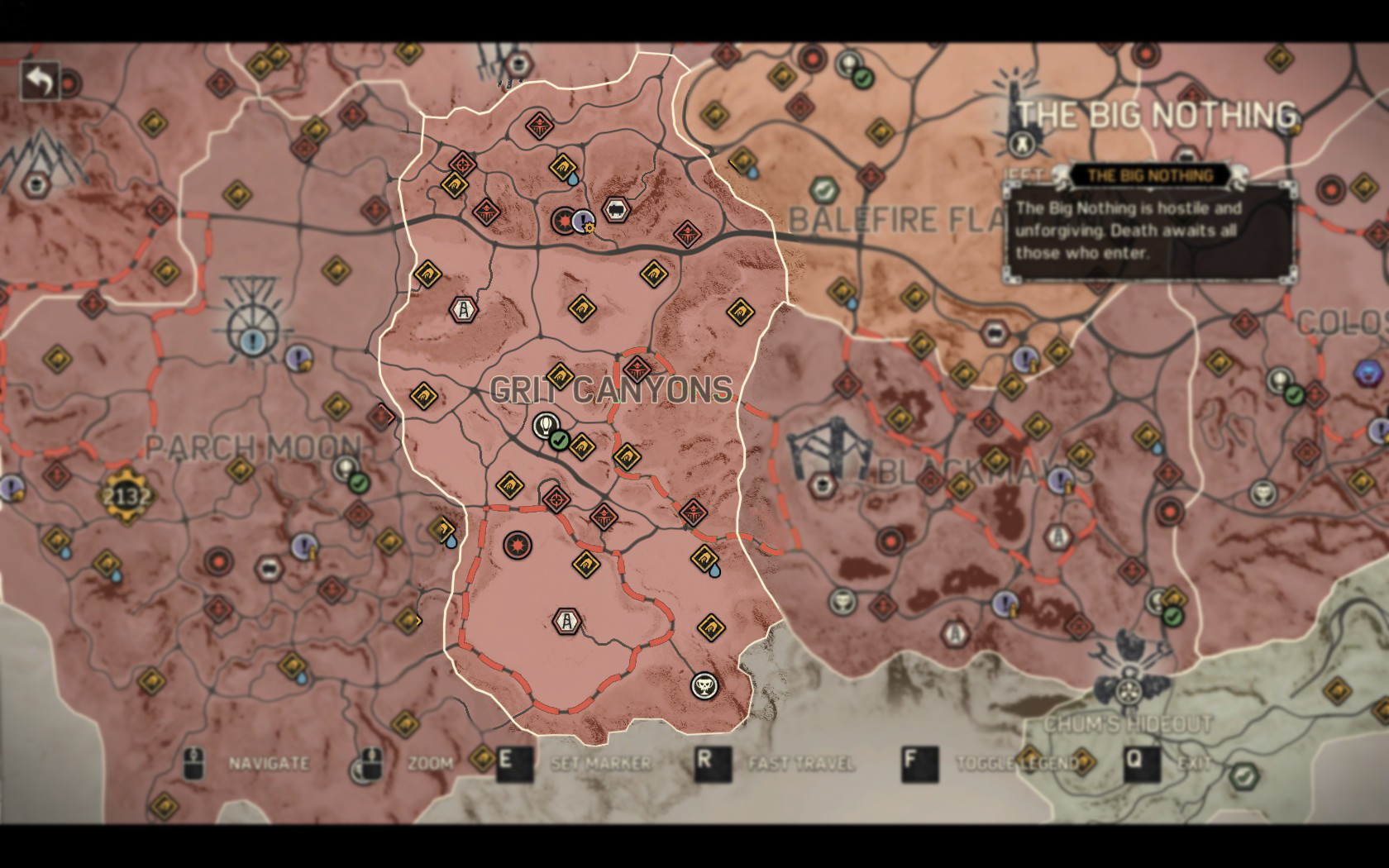 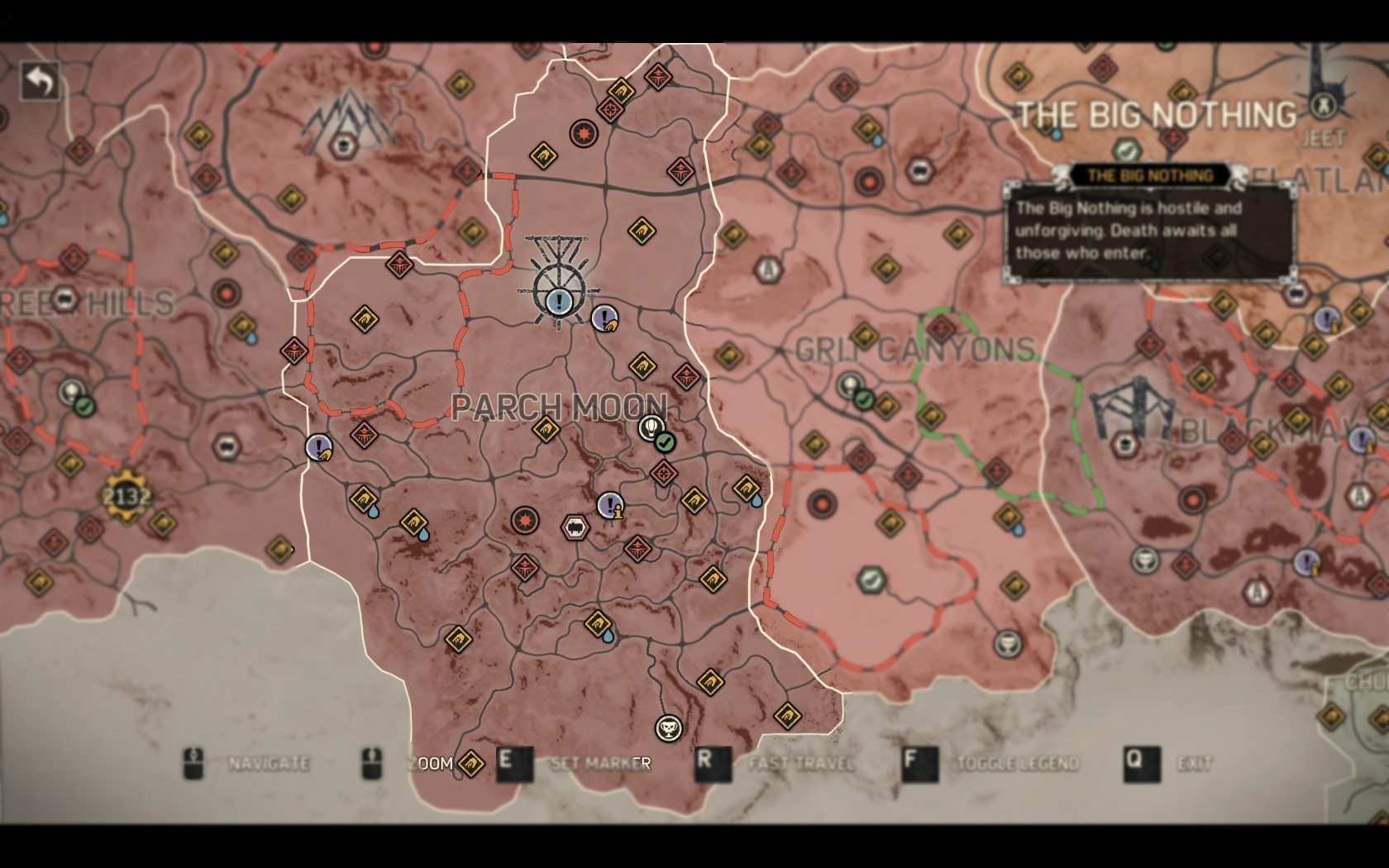 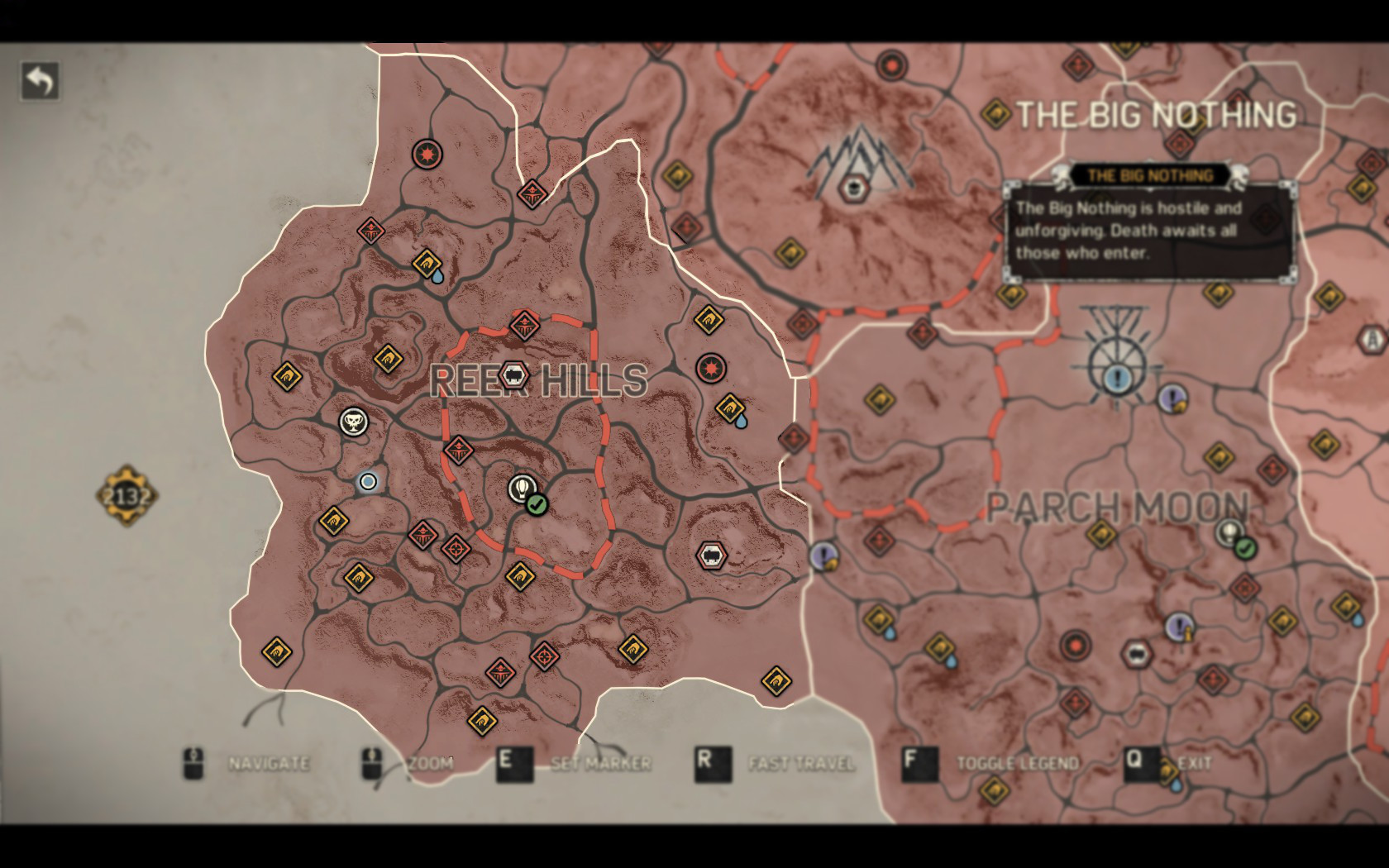 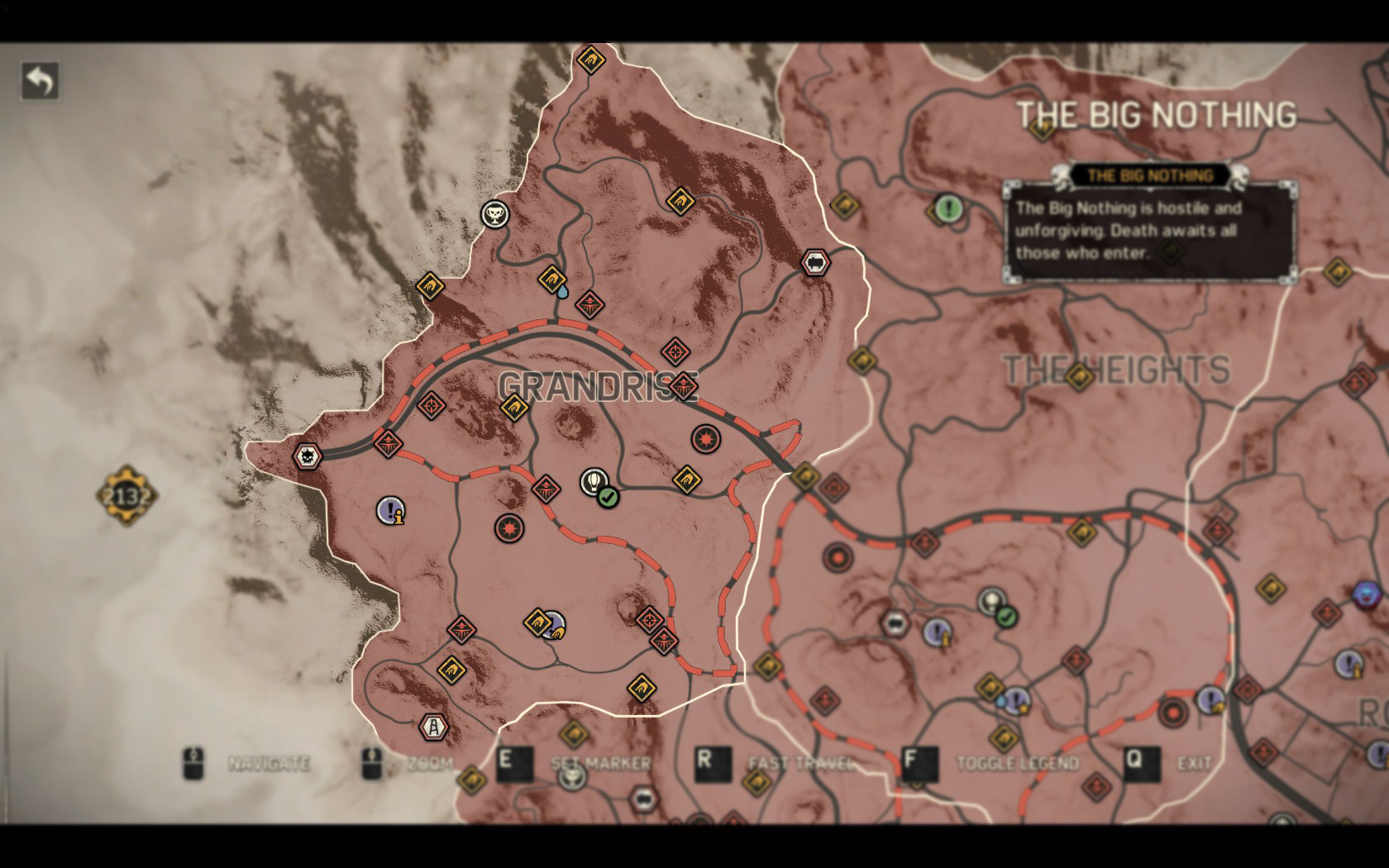 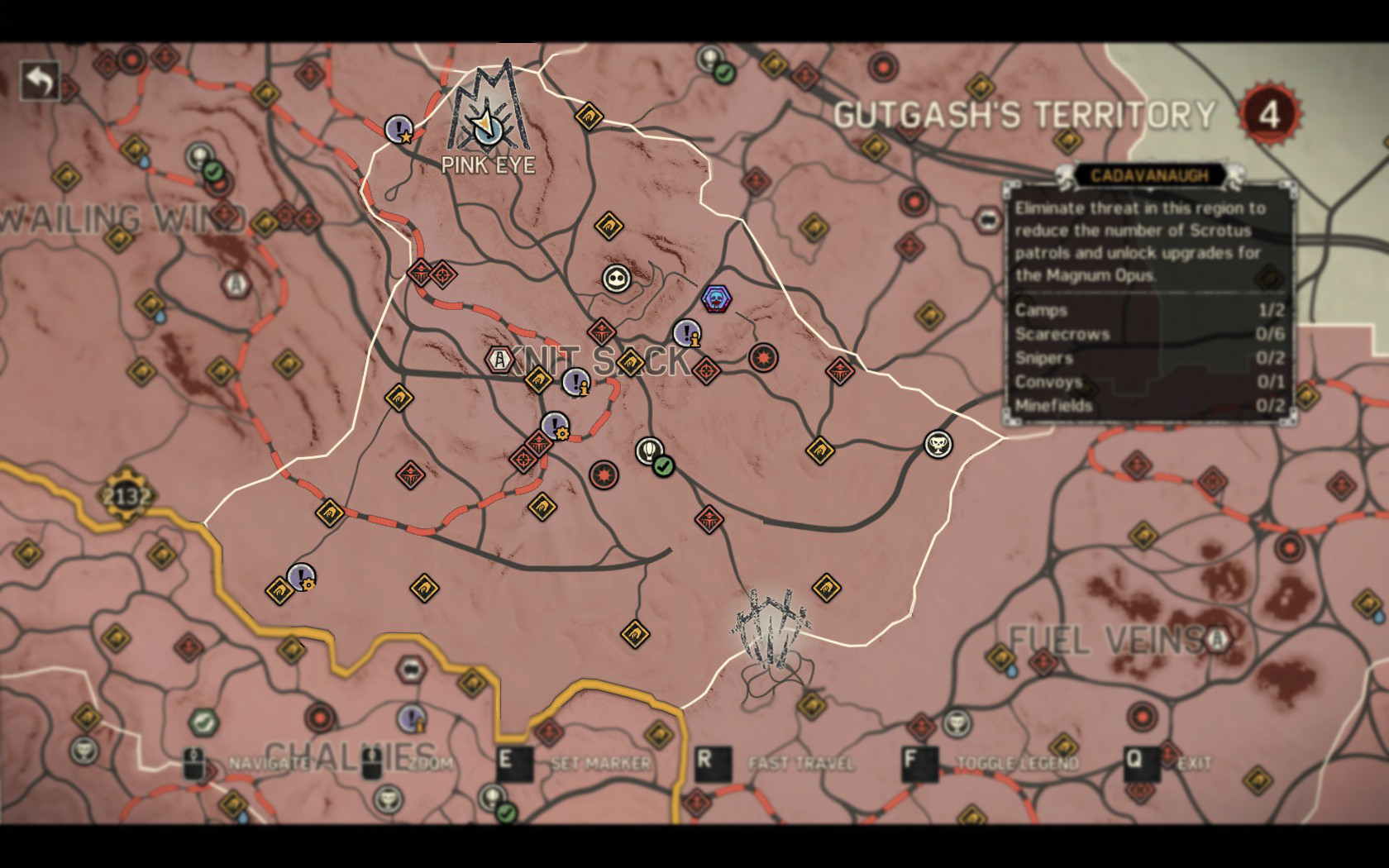 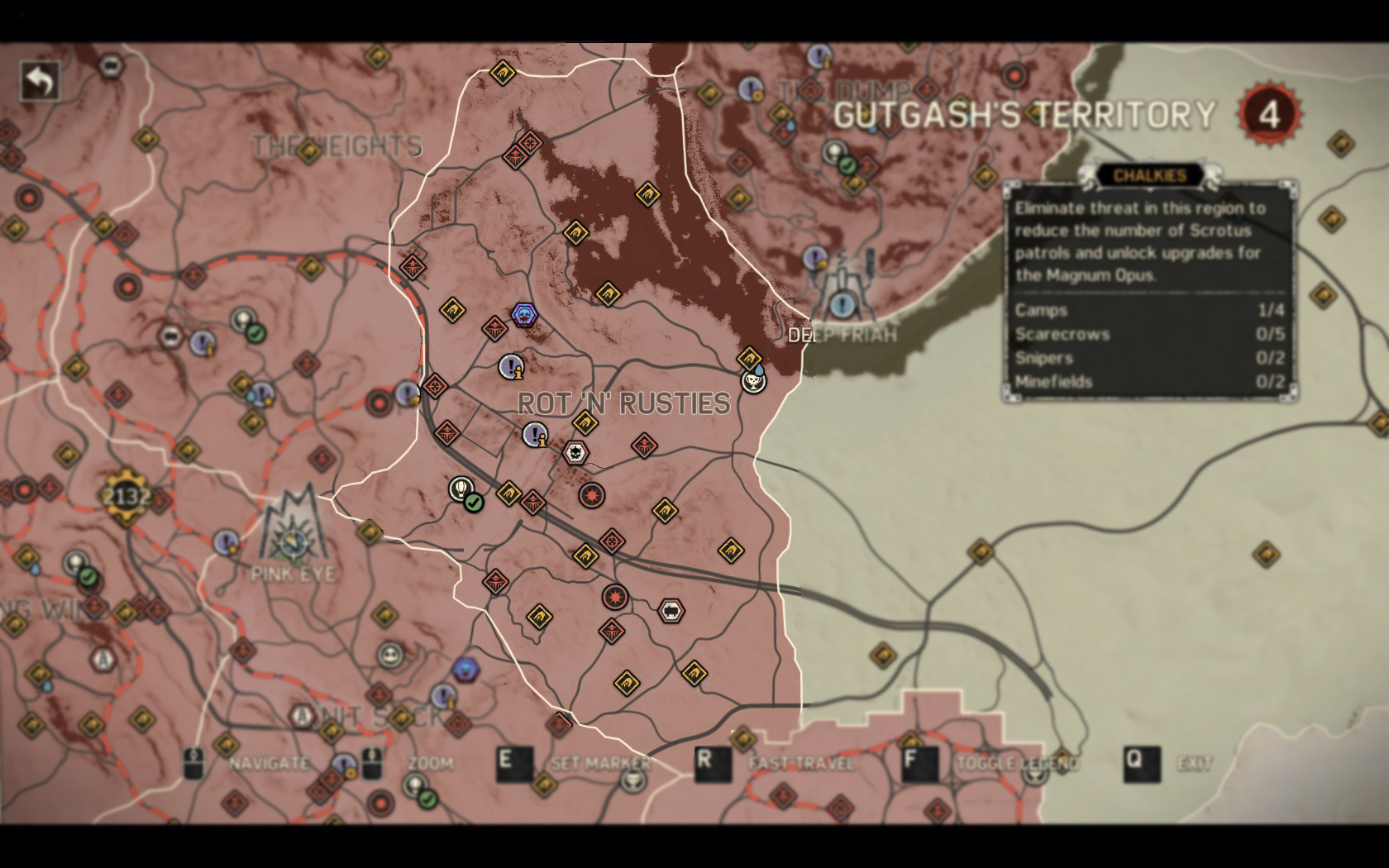 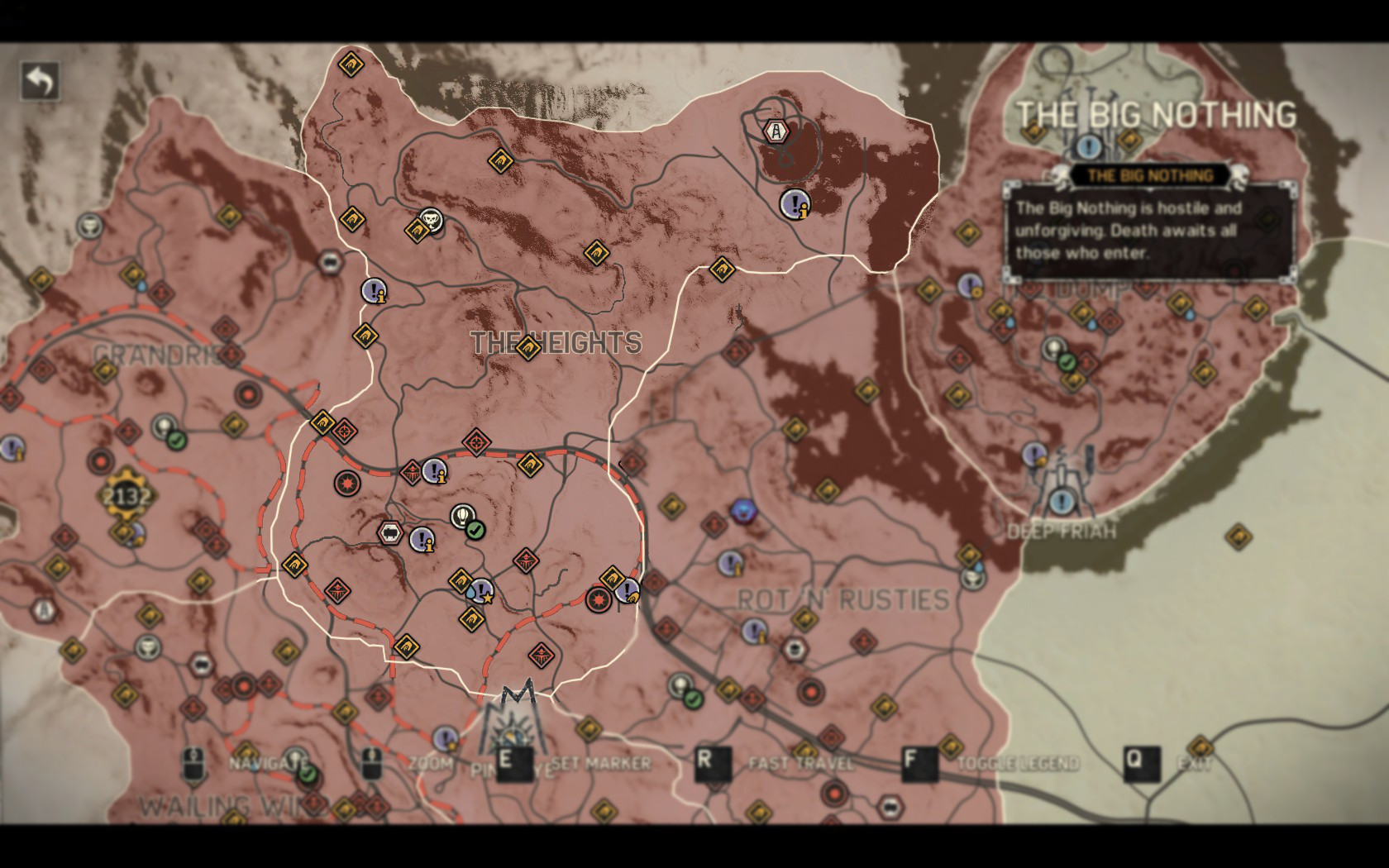 note: the southernmost scarecrow seems not to show up, even if you stand right in front of it 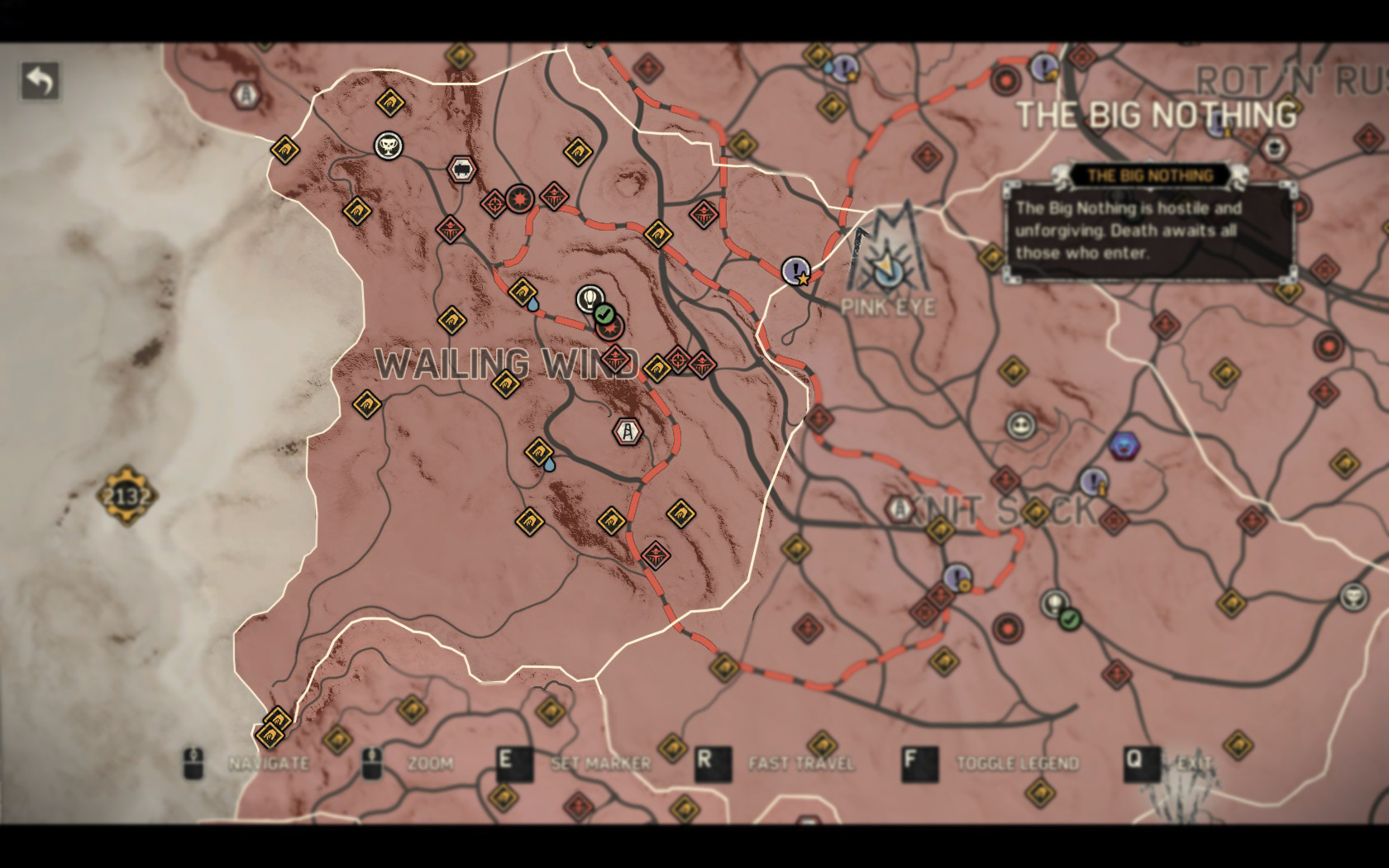 Deep Friah's Territory and The Dunes
The Dump 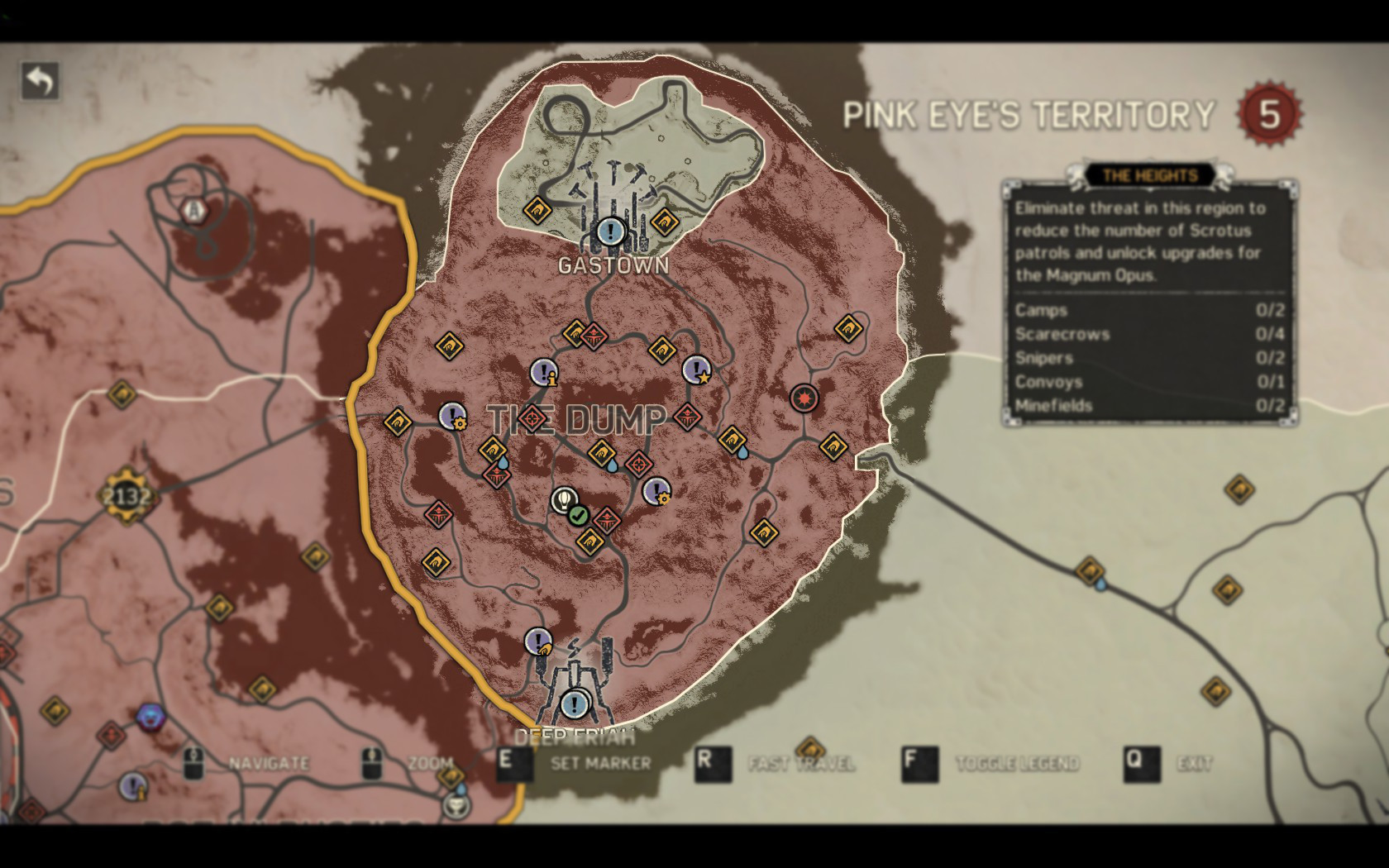 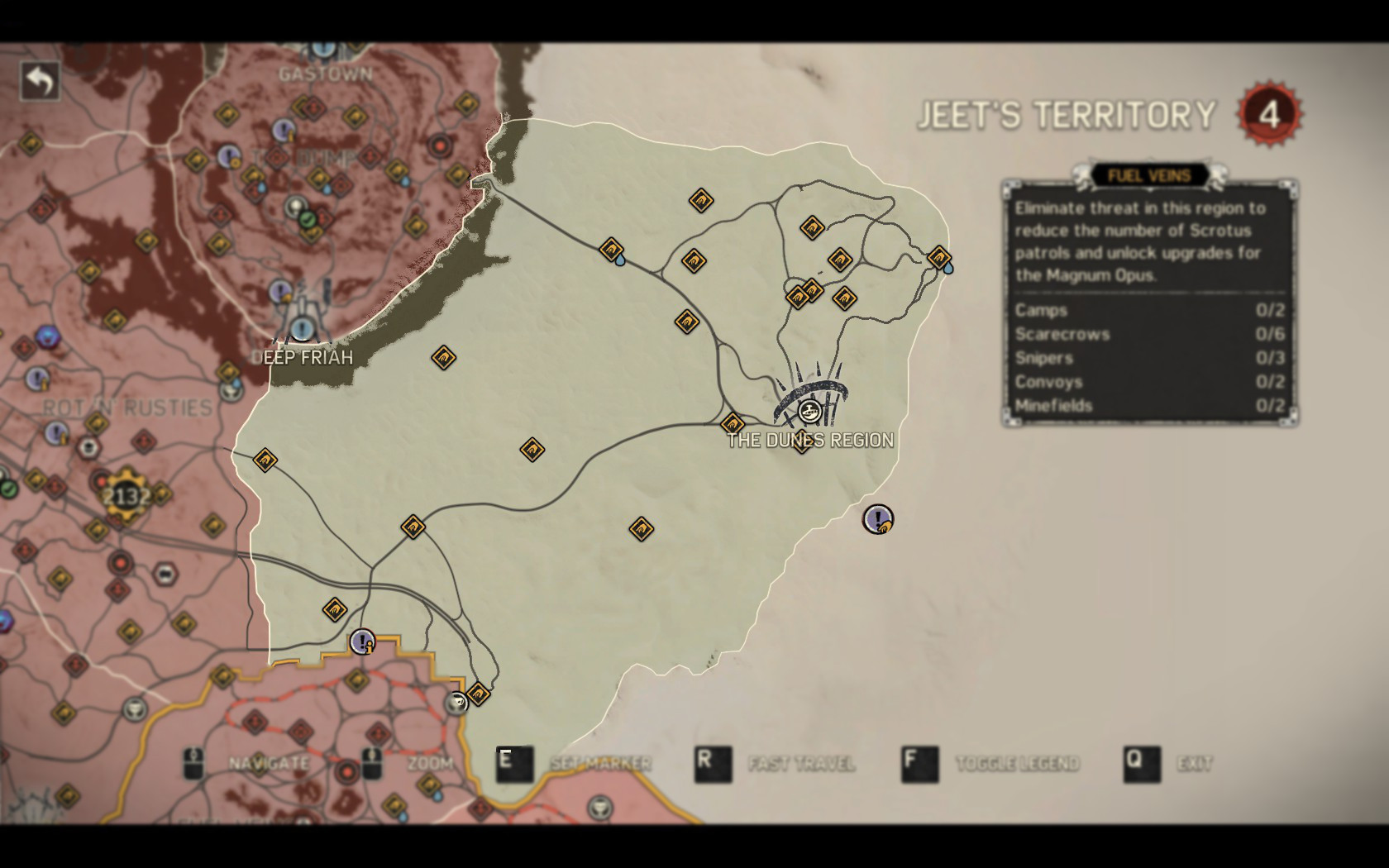 Map Tutorial
About the map

To uncover every location on the in-game map, you can either just drive around the wasteland or unlock them by fufilling certain tasks.
Please bare in mind, that at the time I write this guide, the in-game map is still flawed and will not show some locations, even if you found them. They vanish randomly and only a restart of the game may let them show up again. My best guess is that there is a limit of items that can be shown at all times on the map thus making the map a bit unreliable (bugged).
In the following I describe how the most important locations marker work on your in-game map.

These are marked as little balloons on your map. You'll probably encounter the first one after you completed Chum's tutorial and while you are on your way to Jeet's stronghold. They become visible on your map as soon as you enter a new region.
To conquer a vantage point, (and thus making it a fast-travel point and using it's other benefits), you'll have to make sure that the balloon is operational. This is achieved by completing one or more of the following steps:

You can find all of them by capturing a vantage point and using your binoculars while you are up in the air. You can only locate the ones that are in the same region the balloon is located.
While in your balloon make sure to verify that you found everything, by comparing the threat locations counter with the actual threats you've just uncovered on your map, so you won't need to use the balloon again. (Of course you can use the maps provided here as a shortcut if you missed something)

You uncover all but one location just by driving along these routes. You can easily spot them by the massive amount of car tracks on them - a unique indicator for these convoys.
The convoys itself whirl up a lot of dust, so you can also find them by following this indication. The remaining route - although visible - becomes available on your map after you progressed through the story, so if one is not unlocking - don't worry about it.

Minefields can be discovered just by driving near them. They are always accompanied by a fair amount of car wrecks. You're only other help to find them is Dinki-Di, (your stray-dog companion) who can sniff out the explosives. To unlock Dinki-Di you'll have to do an early side mission in Jeet's hideout. (called "Dinki-Di") Unfortunately you can't use the Magnum Opus to find the minefields, as Dinki-Di is only usable with Chum's Buggy. Dinki-Di starts barking when he sniffs out a minefield and also looks in the direction of it.
He also gave me one false alarm (probably another bug).

These are marked by yellow diamond-shaped symbols with a hand. You'll uncover a lot of them just by driving around the wasteland. They also provide informations about the loot you can find there as soon as they appear on your map.
Every stronghold provides a project for a "Survey Crew", these guys, once you completed said project, provide you with the in-game map entry of every scavenging location in their territory.
Finding all parts is also not that hard, as you can go towards a stronghold project and mark the location of every project-part on your map. (A little gear with a wrench if I remember correctly).
A handful of scavenging locations nevertheless become only available after you accepted certain wastelander(side-) missions.
You really won't need my maps to find every scavenging location, only use them as a possibility to play at your preferred speed. They can ALL be unlocked in-game with these methods.

These are the racing tracks in the game. They are marked as a stylized evil face on a white trophy on a black background.
There is one racing track in every region apart from the following:
Chum's Territory, The Dump, The Dunes and the Balefire Flatland around Jeets.
You can uncover all of them while using a balloon in their corresponding region.

These are locations marked with an exclamation point ( ! ) on a purple background.
There are four types of these encounters and you'll need them to fulfill some of the Legend-Challenges. They are often just short cut-scenes and most of them only show up at a certain point during the story.
The Information Encounters (added by a lower case i) are often linked with an enemy camp and provide tips on how to conquer them. They vanish after you took over their corresponding camp. (These camp information encounters seem also be the only ones which you have to uncover while the rest just appears on your map)
Some of these encounters only appear for a certain amount of time, or at a certain point during a story mission and disappear afterwards.
Note: When I put together these maps I did not thought about these encounters too much and some of them are missing in the maps.
I included all of the Information Encounters for enemy camps, but I did not put every Random Encounter on the map to increase the overall visibility. Please be aware of that!

Genius Seaman Apr 2 @ 5:48am
Jesus Christ man you are awesome

Sloppy Galoppy May 5, 2020 @ 12:13am
Thanks dude, super helpful. Can be difficult finding some of the land mine locations.

Tired of life Mar 14, 2020 @ 3:48pm
Finding and defusing the mines is sure a lot of busy work, but I finally got the achievement Thanks.