Greenlight > Games > FelixBlobDev's Workshop
Greenlight is being retired. For more information on how to submit games to steam, refer to this blog post.
This item has been removed from the community because it violates Steam Community & Content Guidelines. It is only visible to you. If you believe your item has been removed by mistake, please contact Steam Support.
This item is incompatible with Greenlight. Please see the instructions page for reasons why this item might not work within Greenlight.
Current visibility: Hidden
This item will only be visible to you, admins, and anyone marked as a creator.
Current visibility: Friends-only
This item will only be visible in searches to you, your friends, and admins.
Indie Game Battle
Description Discussions13 Announcements17 Comments246 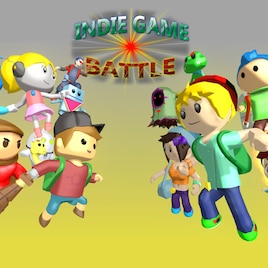 FelixBlobDev
Offline
See all 16 collections (some may be hidden)

Also, the store page is up here:

And here is the community hub:

Read More
We're Greenlit! Thanks so much for the support everyone!
October 1, 2015 - FelixBlobDev

We just got Greenlit! Thank you so much for the support! :D

We'll continue to deliver new content in the future, and we'll see when we can get out there with the game! But you can hopefully expect IGB to release it's first full release in the coming weeks!

Read More
Description
Release date: Late 2015
Indie Game Battle is a multiplayer fighting game for up to 8 players inspired by the Super Smash Bros series. However, IGB features indie characters instead, and the game is open for all suggestions!*

Indie Game Battle therefore acts as an indie Smash Bros, but it has quite a lot of core differences. The biggest difference is that IGB includes both healthbars and a damage percentage. The goal is to either knock your opponents off-stage or deplete their health to 0!
However, IGB offers the option to turn off healthbars by going into Smash mode, or turn off damage percentages by going into Stamina mode! You can also combine this with any gamemodes you please.

We aim to interact with our community as much as possible. All suggestions will be considered, and we never ignore ideas! Anyone interested in the project can feel free to message us about their ideas whenever. if achievable, you might be lucky enough to have your ideas accepted.

Indie Game Battle is a game we want to continuously support and update for as long as possible in the future. We do not have set goal of content for the game for this reason, but we can guarantee that it will continue to grow for a long time as new characters, stages, modes, etc are added to the game.
Right now, the game consists mostly of smaller indie games and less known developers. But we hope to get bigger names into the game in the future if possible, too!

Some features:
-IGB features over 60 playable characters from games such as The Legend of The Artifact, Super Adventure Pals, Poncho, Fantidote, Electroman, Gem Wars: Attack of The Jiblets, Super Steel Squad, DarkEdeNight, and more! Each character has their own unique moveset and special moves.**
-Over 50 stages to fight on. Each stage has a different design, different music, and different hazards.**
-A large story mode, featuring levels from every game series involved!**
-Third party indie games! IGB focuses mainly on the games we at Blob Games Studio are developing, but other indies can join in, too!

*Are you an indie developer? If so, feel free to contact us if you'd like to see your own characters in IGB. Maybe you'll be lucky! If you aren't a developer, you can always suggest a game, too!

**Some features will come in later updates, and not be present in the first released version of the game.


You can check out Indie Game Battle in these places:


If you wish to try out the game's public demo, you can do so here: http://www.indiedb.com/games/indiegamebattle/downloads
< >
246 Comments

The point has been raised before, and it's a good question. 6 just felt natural. However, raising it to 8 would make sense, so we're not ruling it out. :)
It does vary, though. Some actually have more colors than 6; it just happens to be standard at the moment.

Though, I doubt wearing underwear is Shulk's thing only! In fact, I didn't really catch the similarity in it before you said it now. Anyways, TLoTAR may not be released yet, but those costumes are used in the game if that makes it any clearer. :)

Dimpsuu~ Oct 17, 2015 @ 4:26pm
So I realized that most fighters have 6 alternate colors when there's 8-Player Smash, why is this?
Do you mind making the minimum for alts to just be 8? It could then potentially be increased if owners wanna have alternate costumes similar to how Matt has alternate models (including Not-Shulk underwear costume).

Well thats your opinion, and your entitled to it.
I dont think you understand how hard it is to get popular Indie Characters into a game like this. :)

Indie Game Battle has been Greenlit and is now listed in the Steam store. For the latest information, purchase options, and discussions for Indie Game Battle, please see it on the Steam Store or in the Steam Community.
Visit Store Page
For more details Visit Community Hub
For latest discussions
If you really, really want to, you can continue to the Greenlight page. Information on this page may be out of date, since all the action has moved to the areas noted above.