Greenlight > Games > pixeltrickery's Workshop
Greenlight is being retired. For more information on how to submit games to steam, refer to this blog post.
This item has been removed from the community because it violates Steam Community & Content Guidelines. It is only visible to you. If you believe your item has been removed by mistake, please contact Steam Support.
This item is incompatible with Greenlight. Please see the instructions page for reasons why this item might not work within Greenlight.
Current visibility: Hidden
This item will only be visible to you, admins, and anyone marked as a creator.
Current visibility: Friends-only
This item will only be visible in searches to you, your friends, and admins.
A House of Many Doors
Description Discussions2 Announcements2 Comments46 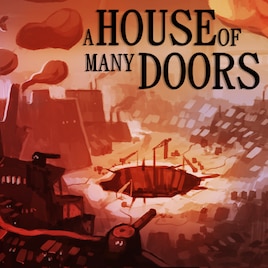 pixeltrickery
Offline
See all 5 collections (some may be hidden)
Kickstarter

View A House of Many Doors in the store

Since you're looking at this on Steam, I'm sure you can see already - but I thought it was worth an announcement. The game has been Greenlit! This is excellent news, and you should look out for the game's release in July next year.

Thank you so much to everyone who voted for A House of Many Doors, you are all bloody marvellous!

After less than 48 hours, the AHoMD Kickstarter campaign has reached its target goal! The only way to go is up - huge thanks to everyone who pledged!

The Kickstarter success means that this game is being fully funded - it's going to be as good as it can be, with beautiful art and music that drips with atmosphere. Now we just need to be Greenlit!

Read More
Description
Release date: July 2016
A House of Many Doors is a 2D exploration RPG coming to PC in July next year, developed by one-man indie studio Pixel Trickery with glorious art by Catherine Unger. This will be a game with narrative depth, compelling characters, and branching, nonlinear storylines.

- A rag-tag crew of dozens of characters with quests to complete and secrets to uncover
- A vast setting, crammed with bizarre civilizations, cities, and ruins
- Stories and lore galore
- A real-time-with-pause combat system
- Procedurally-generated poetry

In A House of Many Doors you are a poet, journalist and spy, exploring the House – a vast parasite dimension that steals from other worlds. You explore the House in a clanking train with mechanical legs, discovering bizarre civilizations and assembling a dysfunctional crew.

I want you to feel like a particular type of 19th-century polymath - a Richard Francis Burton or a Gertrude Bell. An absurd figure with absurd talents who propels themselves confidently into absurdly terrifying situations.

The poems you write are based on the experiences you have in-game. The poems are procedurally-generated, and over time you will build up a proud canon of stirring titles: "The Troglodyte Vomiting of the Mirrors," "An Elegy on the Reluctant Hell of Grief," "Ode to the Strangling Toad." Your poems and travelogues are your route to fame and fortune!

It's really important to me that this game goes on Steam. Unless the game fails the Kickstarter, or is a total commercial failure, I plan to continue to add new rooms and stories to the House as new ideas come to me. Steam's flexible update system makes it the absolute best platform to do this.

It's important to note that the game you play on release will be a complete game! But new content will also constantly be added for free. New places to discover. New characters. Established content will be deepened. More and more branches will be added to existing storylines.

By throwing me a "Yes" now, you could have access to a game that will continue growing for years to come.

javierucu Feb 4, 2016 @ 6:34am
hi, i think A House of Many Doors looks fantastic. I love horror games. Now i´m finishing the working in other game and it would be great to cooperate with such a promising team. I think my work could fit perfectly in your project. You could listen my music here: https://www.youtube.com/watch?v=pA7fQzZ9gUU Could we talk about it? my email is: cga.sound@gmail.com Thank you.

A House of Many Doors has been Greenlit and is now listed in the Steam store. For the latest information, purchase options, and discussions for A House of Many Doors, please see it on the Steam Store or in the Steam Community.
Visit Store Page
For more details Visit Community Hub
For latest discussions
If you really, really want to, you can continue to the Greenlight page. Information on this page may be out of date, since all the action has moved to the areas noted above.