Store Page
Crusader Kings II>  Workshop > taw's Workshop
This item has been removed from the community because it violates Steam Community & Content Guidelines. It is only visible to you. If you believe your item has been removed by mistake, please contact Steam Support.
This item is incompatible with Crusader Kings II. Please see the instructions page for reasons why this item might not work within Crusader Kings II.
Current visibility: Hidden
This item will only be visible to you, admins, and anyone marked as a creator.
Current visibility: Friends-only
This item will only be visible in searches to you, your friends, and admins. 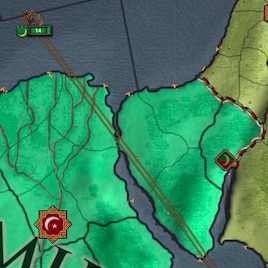 This item has been added to your Subscriptions. Some games will require you to relaunch them before the item will be downloaded.
Description
Adds navigable Suez canal to the game. It looks like standard river-river portage, but you don't need to be Norse to sail it (only Norse can navigate major rivers, but no such restrictions on portages).

In spite of common skepticism, canals connecting Red Sea and Nile (which then goes into Mediterranean Sea) existed in antiquity, only closed in 767, and Venice considered rebuilding it in 1400s, so it's not outside realm of possibility that one might exist in CK2 timeframe. At least it's much more likely than a bridge connecting Ireland with Wales.

More importantly - adding Suez Canal makes India part of the actual game, not just some separate minigame with no effect on the rest of the world, other than making harming performance.

Mod changes checksum, obviously. Should be compatible with most mods that don't change the map.

ross.samuel.melton Jan 4 @ 11:58am
is it compatible with save games that did't have it before

Shamefur Dispray Dec 31, 2019 @ 8:58pm
Perfect! I just came back from a hiatus and wanted to try raiding india for the first time only to realize there was no way to get there on a Norse ship. Thanks!

raguel Dec 2, 2019 @ 12:14am
Great mod. Do you mind if I combine your mods with others so I and others have access to popular mods that are compatible with the community patch mod?