Greenlight > Games > paulmeetsworld's Workshop
Greenlight is being retired. For more information on how to submit games to steam, refer to this blog post.
This item has been removed from the community because it violates Steam Community & Content Guidelines. It is only visible to you. If you believe your item has been removed by mistake, please contact Steam Support.
This item is incompatible with Greenlight. Please see the instructions page for reasons why this item might not work within Greenlight.
Current visibility: Hidden
This item will only be visible to you, admins, and anyone marked as a creator.
Current visibility: Friends-only
This item will only be visible in searches to you, your friends, and admins.
A Stranger Comes Calling
Description Discussions0 Announcements7 Comments100 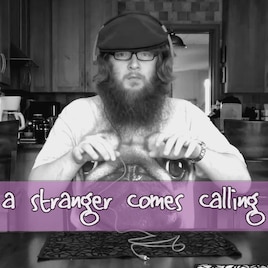 paulmeetsworld
Offline
See all 4 collections (some may be hidden)

View A Stranger Comes Calling in the store

I can't believe I'm even saying this, but A STRANGER COMES CALLING has been Greenlit for Steam!!

I've actually (not-so-secretly, if you follow me on Twitter) been working on a follow-up to the game for a little while, tentatively called "DON'T TURN YOUR BACK ON THE OCEAN". Since both games are on the short side, I think that, instead of releasing STRANGER as its own thing on Steam, I'm going to wait until the second game is finished, and then release them together as a single package.

The script is written and the footage is recorded; it's a matter of making time in my schedule to actually program it. SO! Keep your eyes peeled, umm...some time in the future, for THE AWKWARD STEVE DUOLOGY, coming to an Internet near you!

New interview just went live on FMV World! We talked about social anxiety and making interactive movies on a budget, and also my One Weird Trick for answering the door when there's a stranger outside (I just ask my wife to do it):

(And, as always, if you don't wanna wait for Steam to Greenlight this thing, you can check out the game RIGHT NOW on itch.io: http://oharock.itch.io/a-stranger-comes-calling)

IN A WORLD, WHERE DOORBELLS ARE HAPPENING...

ONE MAN MUST FACE HIS FEARS

AND OPEN THE DOOR FOR SOMEONE HE DOESN'T KNOW

"It's engaging, funny, and something many of us can instantly relate to." - {LINK REMOVED}FMVWorld

"Quite fun, quite comical, and a little soothing with all the bunnies and turtles." - Apoch

"Through a natural instinct for humor, a smart look at available resources, and a hint of the absurd, Franzen created a game that will leave some laughing while others scratching their heads at why the beardy man is talking into a Game Boy." - {LINK REMOVED}Joel Couture, IndieGames

"Oh my god, I'm on the title screen and I'm dying." - AceFangirl

Help Awkward Steve psych himself up to answer the door in this brand-new INTERACTIVE FMV THRILLER! Lower his Anxiety by hiding under tables, petting rabbits and more, so he can build the courage to open up when... A Stranger Comes Calling.
Follow us on {LINK REMOVED}Facebook and Twitter if you want to hear more about our weird, dumb game!!

Note: If you don't wanna wait for Steam, you can check out the game NOW on itch.io!:
{LINK REMOVED}http://oharock.itch.io/a-stranger-comes-calling
< >
100 Comments

paulmeetsworld  [author] Mar 12, 2017 @ 5:57pm
@RipWitch Not yet! "A Stranger Comes Calling" has been finished for a while (it's on itch.io if you wanna check it out), but I've been working on a sequel, and I want to bundle the two games together for the Steam release. I JUST finished editing all the footage last week, but there's still lots of little fiddly stuff I need to take care of before I'm comfortable releasing it.

RipWitch Mar 12, 2017 @ 4:17pm
Oh can't wait to see another FMV on Steam's store! Do you currently have an estimate on when the Steam release is coming?

Josh Powlison Dec 4, 2015 @ 5:42pm
Actually just bought and played through this, totally worth it. I loved it!

A Stranger Comes Calling has been Greenlit and is now listed in the Steam store. For the latest information, purchase options, and discussions for A Stranger Comes Calling, please see it on the Steam Store or in the Steam Community.
Visit Store Page
For more details Visit Community Hub
For latest discussions
If you really, really want to, you can continue to the Greenlight page. Information on this page may be out of date, since all the action has moved to the areas noted above.