Greenlight > Games > DavidSchPT's Workshop
Greenlight is being retired. For more information on how to submit games to steam, refer to this blog post.
This item has been removed from the community because it violates Steam Community & Content Guidelines. It is only visible to you. If you believe your item has been removed by mistake, please contact Steam Support.
This item is incompatible with Greenlight. Please see the instructions page for reasons why this item might not work within Greenlight.
Current visibility: Hidden
This item will only be visible to you, admins, and anyone marked as a creator.
Current visibility: Friends-only
This item will only be visible in searches to you, your friends, and admins.
Dino Eggs: Rebirth
Description Discussions0 Announcements13 Comments72 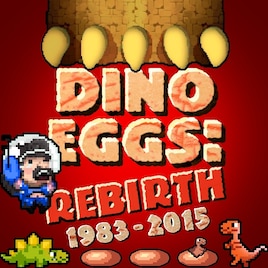 DavidSchPT
Offline
See all 3 collections (some may be hidden)

Store page
Recent Announcements View All (13)
Appearance on "One Up Gaming" podcast
May 11, 2016 - DavidSchPT

Thanks to David Cameron -- perhaps not the David Cameron you're thinking of -- but the host of the UK's excellent "One Up Gaming" who invited me onto his latest episode.

We chatted about the good old days, "Dino Eggs" and "Dino Eggs: Rebirth."

Update -- www.DinoEggsRebirth.com got the Greenlight, and the new game will be released on Steam on Thursday June 9.

The "Coming Soon" page has just been posted here on Steam:

Thank you very much for your support in helping DINO EGGS: REBIRTH get the big fat Greenlight here on Steam...!!!

Our developer is diving into the code now, and we'll be announcing our Steam Release date soon.

In the meantime -- please check out the latest Dino Eggs news, activity, and game forum at www.DinoEggsRebirth.com

I'm doing some fiddling with time myself, if you'd like to check:
http://steamcommunity.com/sharedfiles/filedetails/?id=660928529

Our developer is diving into the code now, and we'll be announcing our Steam Release date soon.

In the meantime -- please check out the latest Dino Eggs news, activity, and game forum at www.DinoEggsRebirth.com

"Wonderful!... Congratulations on showing the world what a great remake of an 8-bit masterpiece should look like!" -- Message sent to the Dino Eggs: Rebirth Facebook page.

z0rit0 Jan 17, 2016 @ 1:10am
Hi Mobeeuz
Yes the 2 styles of graphics are available. You can just choose the one you prefer from the options. Also if you want to give it a more retro look you now have the possibility to make the background fully black like in the good old days! See screenshots here [cpc.cx] and here [cpc.cx].

Mobeeuz Jan 16, 2016 @ 5:34pm
Is it possible to play with the 2013 graphics instead of the goofy bobblehead 2015 version? One looks like a serious remake and the other a cheap phone game.

Dino Eggs: Rebirth has been Greenlit and is now listed in the Steam store. For the latest information, purchase options, and discussions for Dino Eggs: Rebirth, please see it on the Steam Store or in the Steam Community.
Visit Store Page
For more details Visit Community Hub
For latest discussions
If you really, really want to, you can continue to the Greenlight page. Information on this page may be out of date, since all the action has moved to the areas noted above.