Greenlight > Games > Black Shell Media LLC's Workshop
Greenlight is being retired. For more information on how to submit games to steam, refer to this blog post.
This item has been removed from the community because it violates Steam Community & Content Guidelines. It is only visible to you. If you believe your item has been removed by mistake, please contact Steam Support.
This item is incompatible with Greenlight. Please see the instructions page for reasons why this item might not work within Greenlight.
Current visibility: Hidden
This item will only be visible to you, admins, and anyone marked as a creator.
Current visibility: Friends-only
This item will only be visible in searches to you, your friends, and admins.
Dark Matter Hudokai
Description Discussions1 Comments149 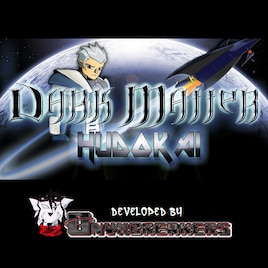 Dark Matter: Hudokai is a traditional RPG with science fiction elements. As such, it's a story driven game focusing on the main cast of six characters, including the protagonist (Nova), all brought to life by voice actors. Using spheres of condensed dark matter, known as "Hudokai", players can customise their abilities through equipping them to the characters, learning unique elemental skills to help in the fight against the villainous Cult of Kai.

Through random battles and boss fights, players can gain Ability Points to level up the Hudokai to learn even more abilities as they travel from planet to planet in their stolen prison space ship. Whilst in space, players can engage in tactical based space fights, whilst on planets players can battle in side-view battle screens, engage in conversations with multiple choices, and play in card battles for additional collectibles and trophy achievements.

At current, the game is split across three parts where the save file can be transferred between them, but this is one game and story where the player, as Nova, wakes up from stasis with no memory of his past, and can forge him into a new man whilst fighting against the Cult of Kai leader, Viktor Len.

For the Steam release, the three episodes (or parts, rather) will be released separately. Later down the line, there will be a version with all three parts in one release. As such, the final release will contain just the one game file and will contain all the features of the previous parts.

– Embark on a story-driven game against the Cult of Kai, complete with voices
– Equip at least 20 spheres of “Hudokai” to customise your abilities
– Level up your skills through Ability Points and equip them to others
– Control and re-arrange 6 lively characters with unique strengths
– Fly through three galaxies of varied planets and life
– Engage in space battles in a tactic-style environment
– Collect cards and combat people through card battles
– Select conversational choices when speaking with others
– Obtain achievement trophies through additional tasks
– Synthesise weapons to create more powerful variants

iscariotineffigy Nov 17, 2015 @ 6:59pm
This is interesting and shows some sign of promise. You more than likely have the sophistication to make a good game, but this one is not it. I think the taste is lacking and more discretion could be used in crafting a style or theme for the game. You need to leverage the simplicity of your resources, not make it blatantly obvious. Good luck in the future!

Tara_Windwalker Nov 7, 2015 @ 3:19am
voted. I like the music and the map in the upper right corner. I agree with EveStorm that the dialog font doesn't fit the game: it takes longer to read and is an unnecessary strain to the eyes (which eventually makes a gamer tired and they'll not play as long or as often). Clarity is essential because of accessibility for those with diminished eyesight and those who need glasses but can't afford them or won't wear them. A font shouldn't be the reason why people don't play a game.