Store Page
Team Fortress 2 > Guides > Adrenaline Mack's Guides
This item has been removed from the community because it violates Steam Community & Content Guidelines. It is only visible to you. If you believe your item has been removed by mistake, please contact Steam Support.
This item is incompatible with Team Fortress 2. Please see the instructions page for reasons why this item might not work within Team Fortress 2.
Current visibility: Hidden
This item will only be visible to you, admins, and anyone marked as a creator.
Current visibility: Friends-only
This item will only be visible in searches to you, your friends, and admins.

TF2: How to use HLDJ correctly
By Adrenaline Mack
Found a server you like with HLDJ?

Wanna know how to micspam like the fellas and fellettes who make it seem easy?

Well then, this guide's for you!

HLDJ Etiquette: Micspam has gotten a bad reputation in the community because of the folks using it to annoy, troll, and overall ruin the gameplay experience for others. HLDJ use to work on all servers, but Valve changed that when they saw this push of abusive HLDJ users, henceforth condemning them and the program.

HLDJ, however was not made to do these things. It was made for entertainers, DJ's, and even comedians. But there are still said people that use it wrongly, and if you plan to do that with this guide, I'll have to ask you to click off the guide and go about your day.

I don't use HLDJ to annoy or troll, and neither should you. It's a great platform for playing some tunes, making folks smile, or just lighten the mood for some fellas.

Things You'll Need:
It should be able to go without saying, but if you wanna Micspam without killing everyones ears or sounding like a trainwreck in HD, you'll need some tools to better your musics. 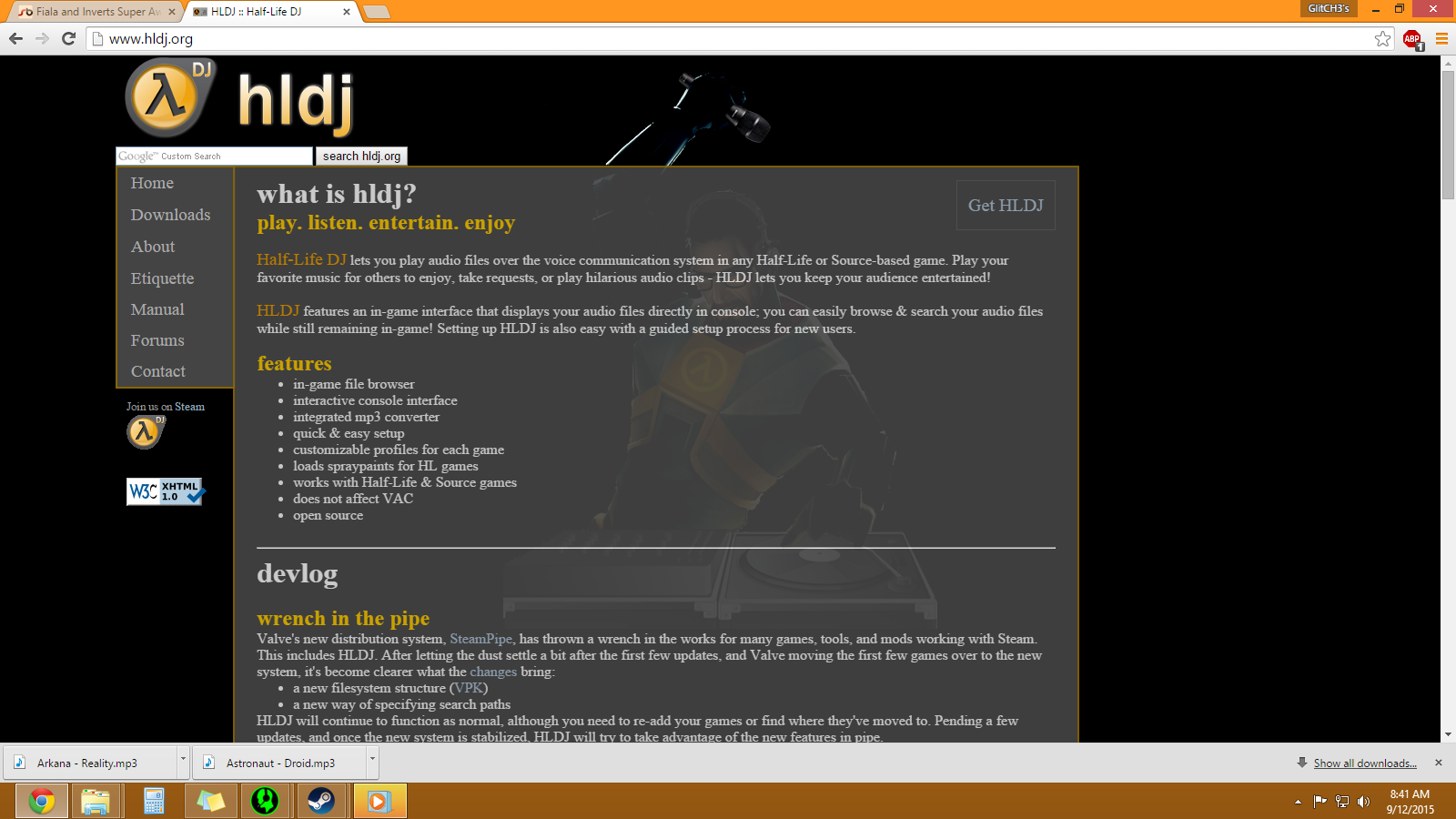 The main program that empowers you to micspam. We'll go over it's features in a bit. 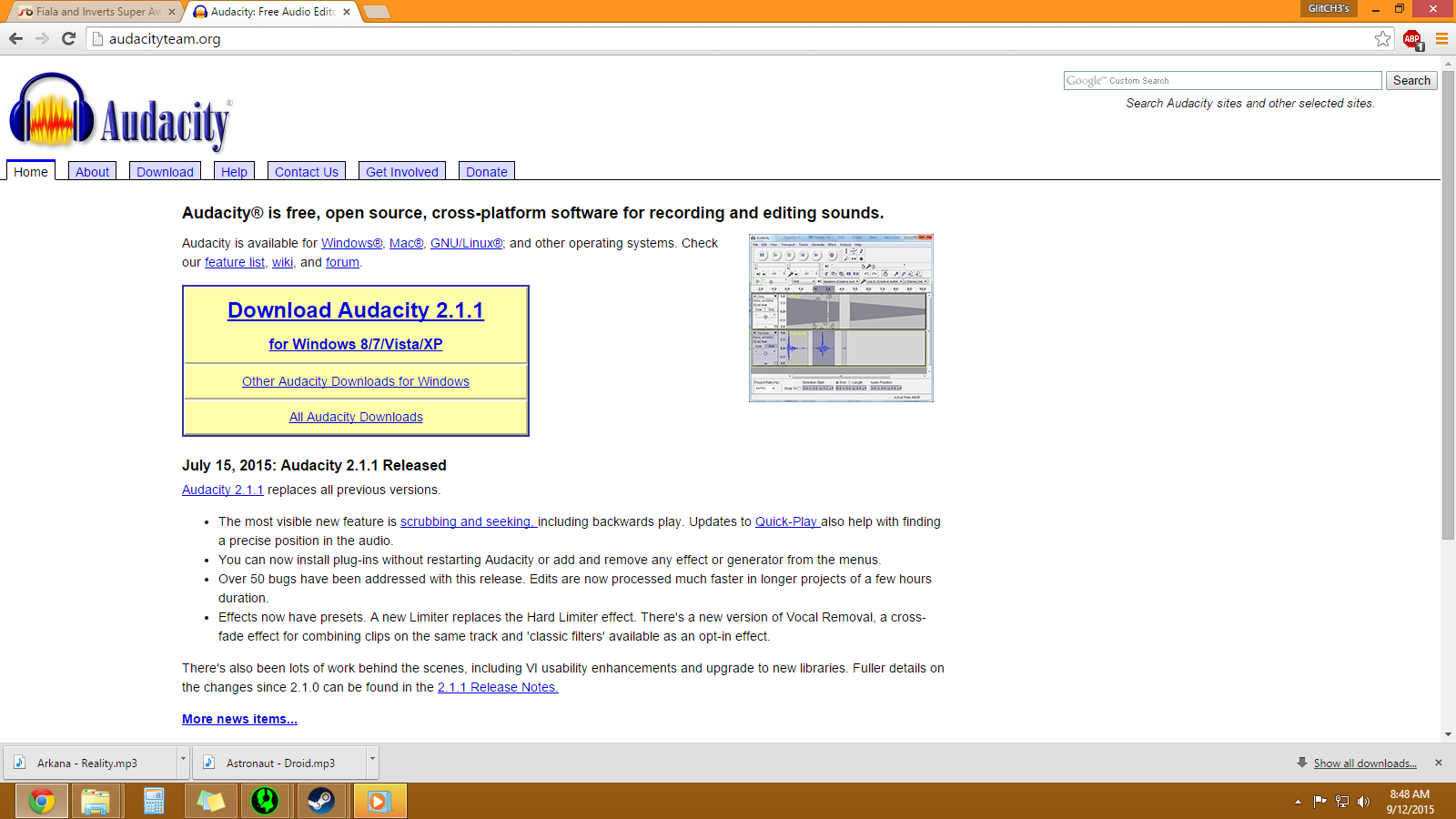 I personally use Audacity, but Gold Wave and many others will do just as well. You'll need this to fix issues such as audio being too quiet, too loud, or bass cracks.

3: A Micspam server:
There aren't as many as there use to be, but good Micspam servers do still exist. And once you find one, you'll have the perfect place to play some tunes.
Servers that will allow Micspam will have these two settings in their server.cfg's
sv_use_steam_voice 0
sv_allow_voice_from_file 1

Alright, let's get to the setting up, shall we?
Setting up HLDJ
Step 1: Download HLDJ 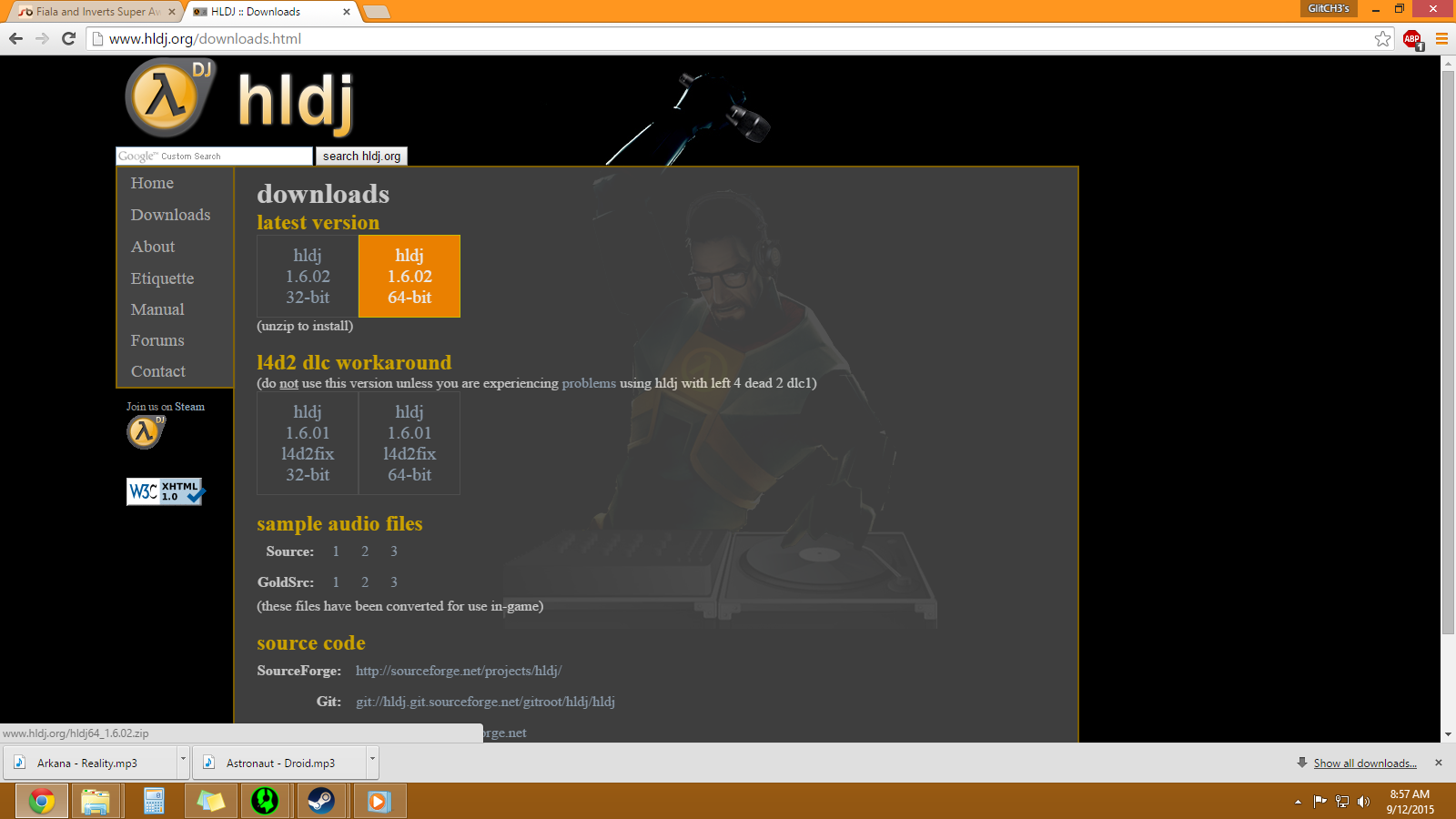 This is where the work begins, go download whatever HLDJ suits your system.
http://www.hldj.org/downloads.html

Step 2: Setting HLDJ up
Once you've downloaded HLDJ, you should have a .zip file. Inside that file is your HLDJ folder. Pull this out to wherever you want it to be. I perfer it on my desktop. 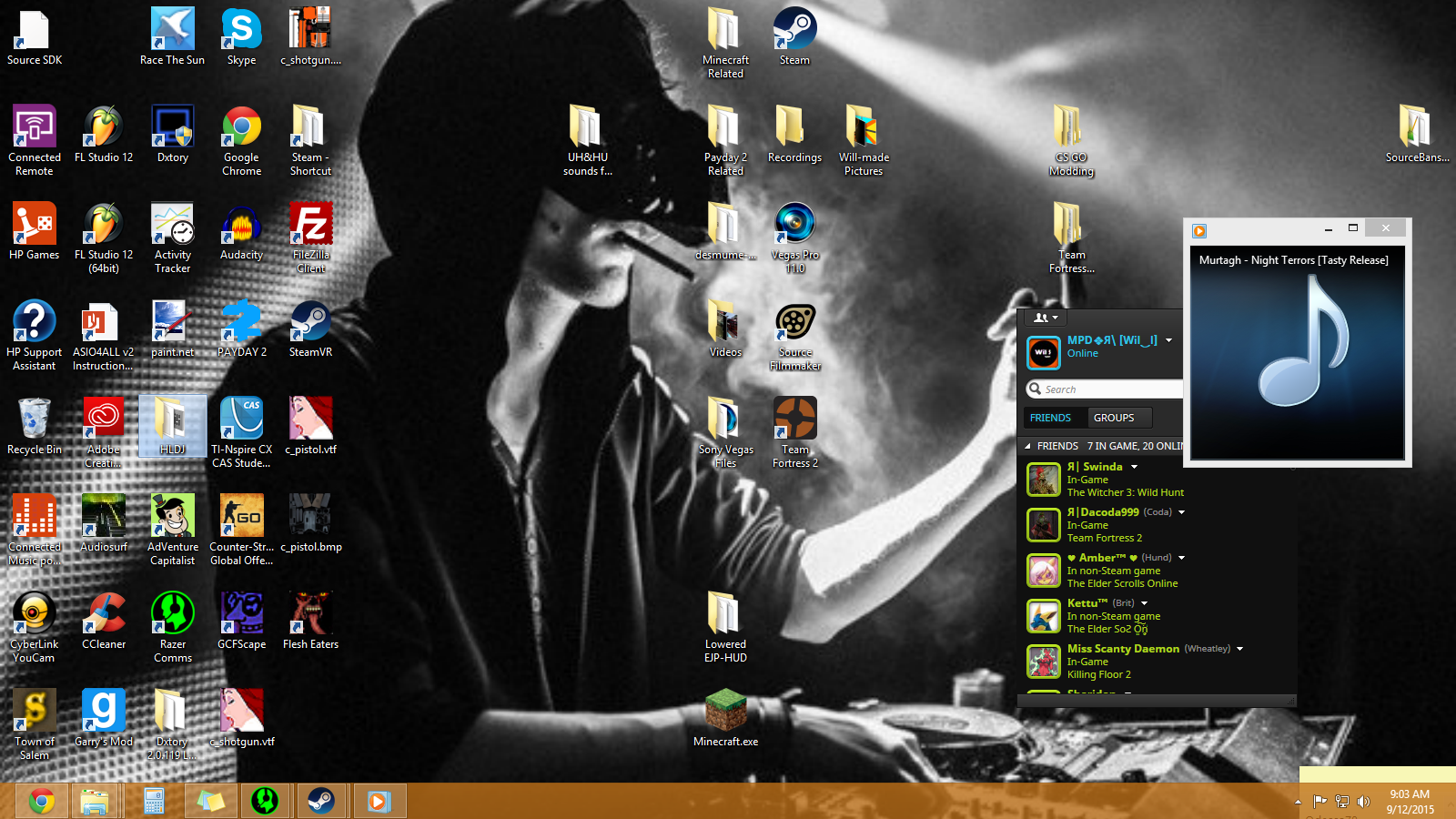 Now, open that up and run HLDJ.exe

You'll be faced with this. 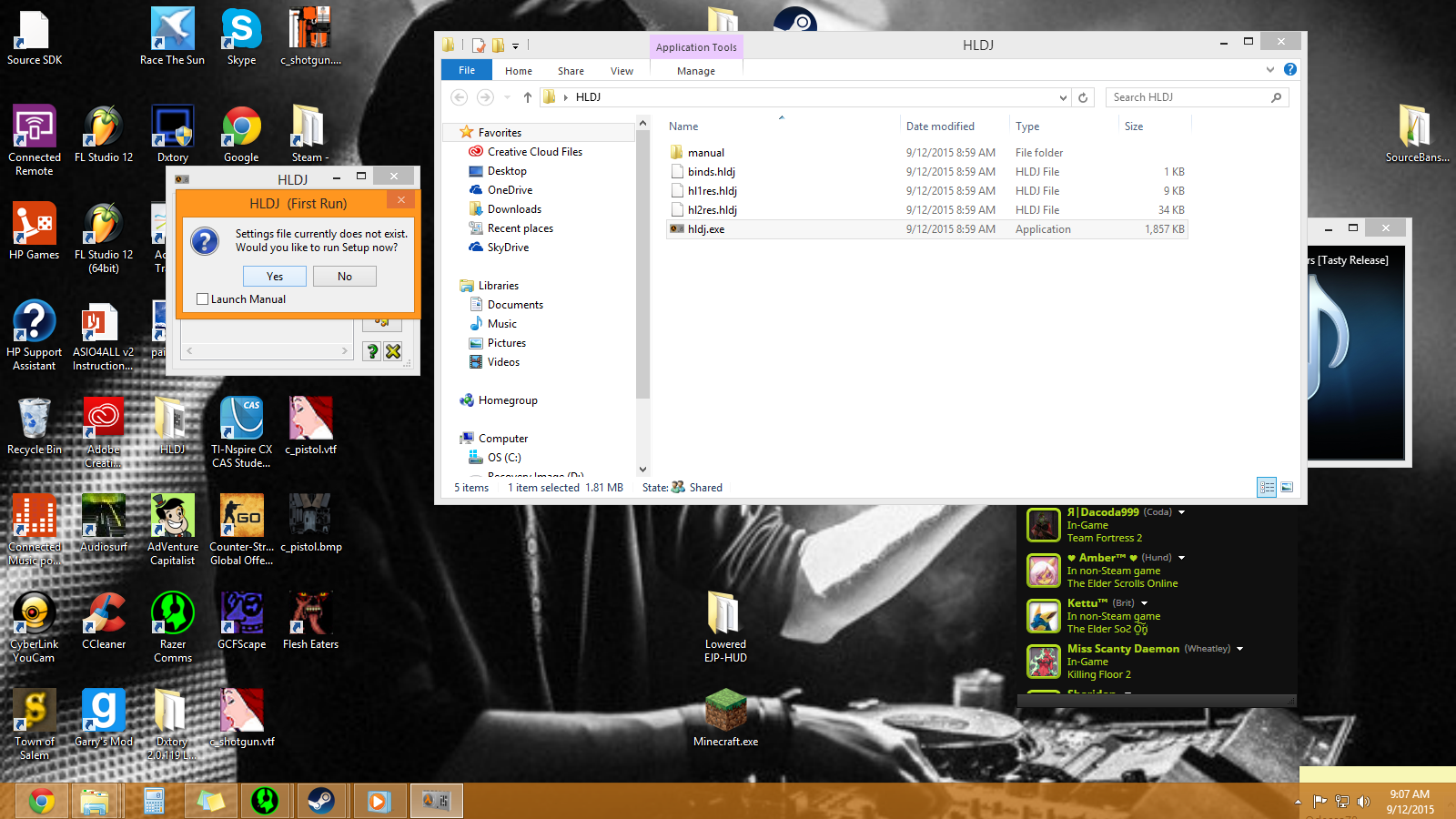 Hit yes, then HLDJ will ask if you would like to add all of your games.

You of course, want to hit "Yes" again 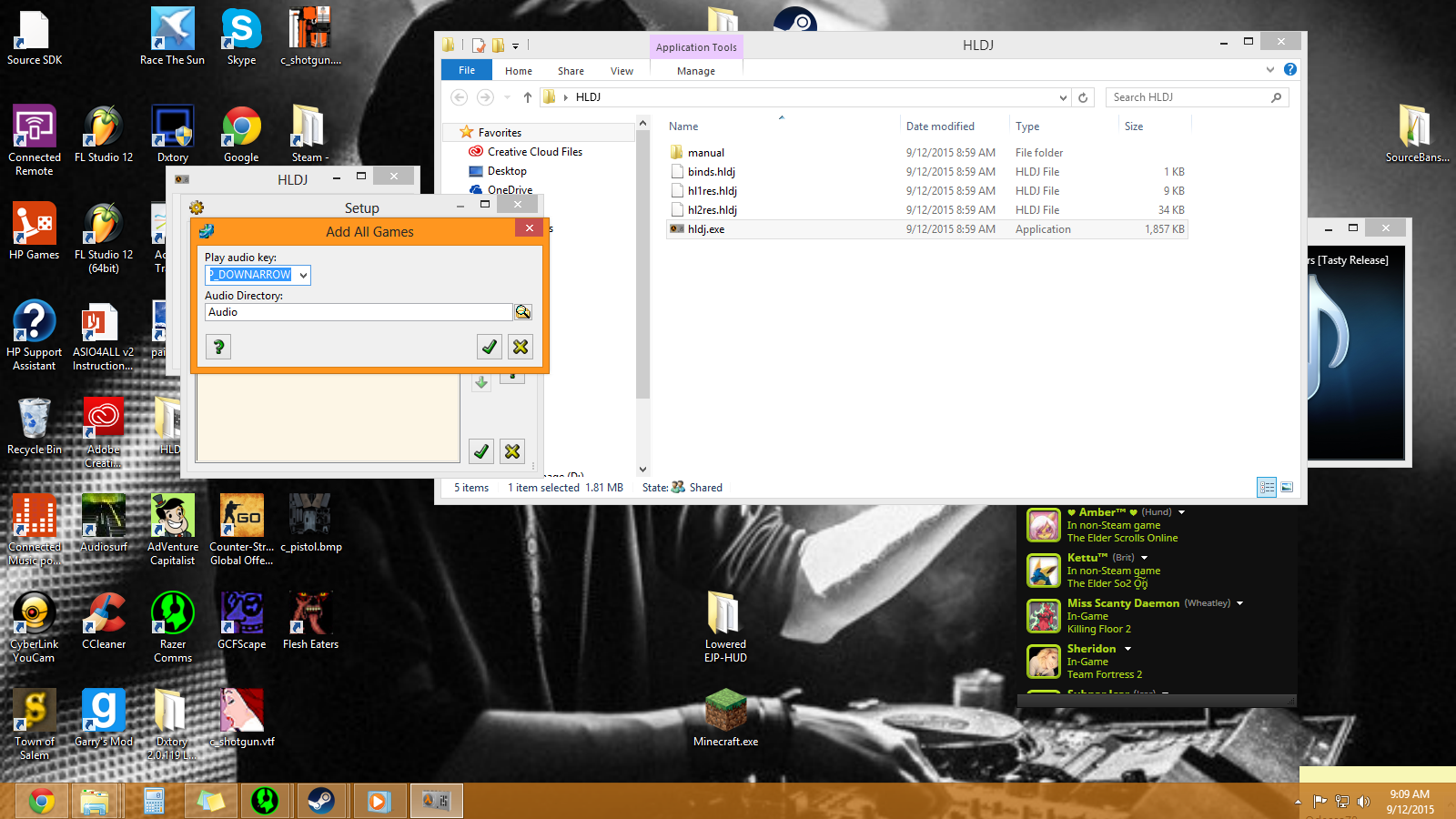 This is completely up to you.

I do however suggest a key that you won't hit on accident, but one you'll remember.

Now, you're Audio directory. This is where your converted songs/spams will go. There's a few ways to go about this. 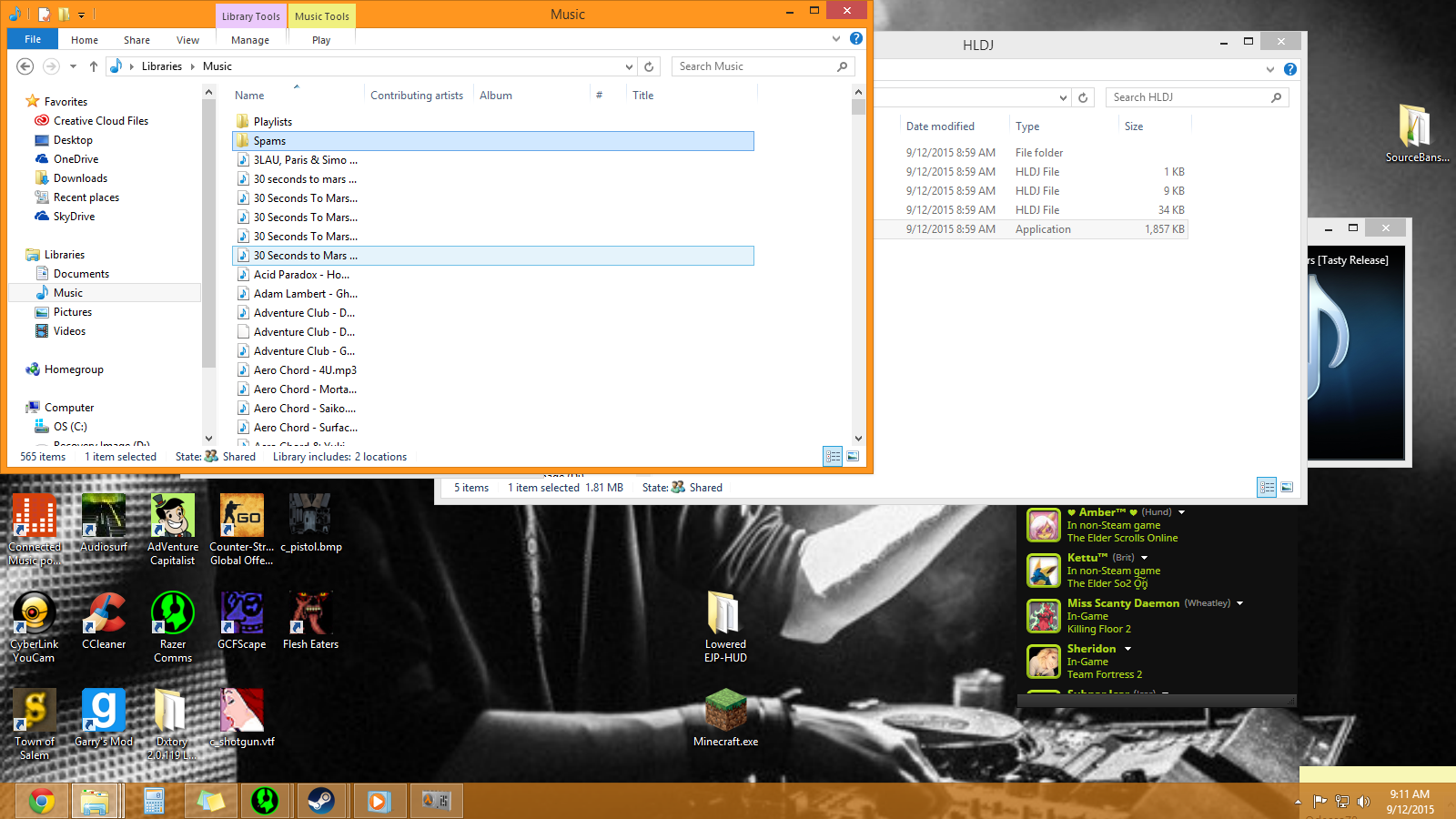 As you can see there, I have my "Spams" folder in my Music folder. However wherever you put it is once again your call, put it somewhere that's easy to remember, then select that as your Audio folder. 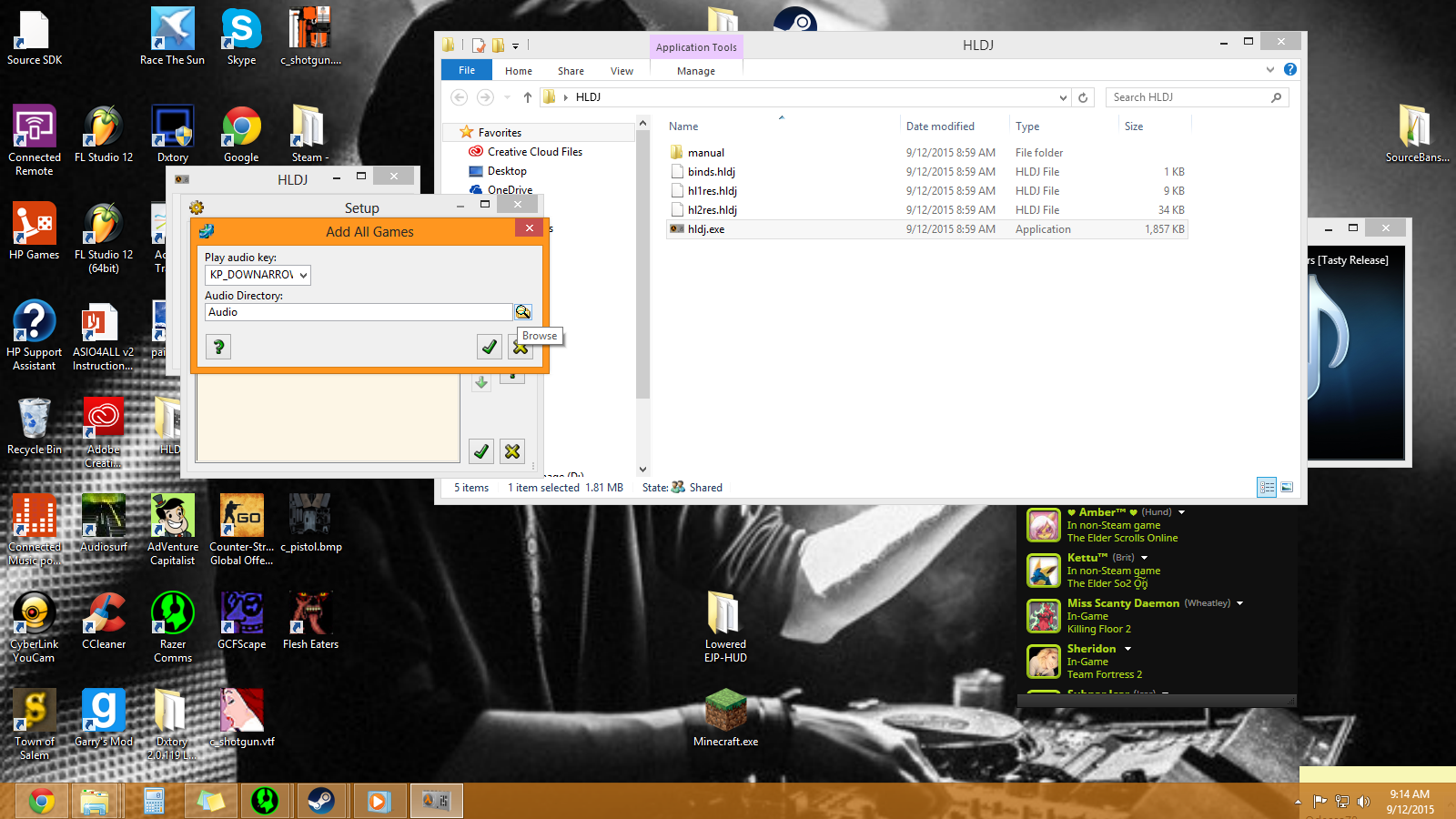 Hit this button to browse for your desired folder.


*Note* You don't have to make a spams folder. HLDJ will access any folder you use, but for ease of access and organization, I highly recommend making a Spams folder somewhere and using that

Now HLDJ will scan for all your games, this may take some time. 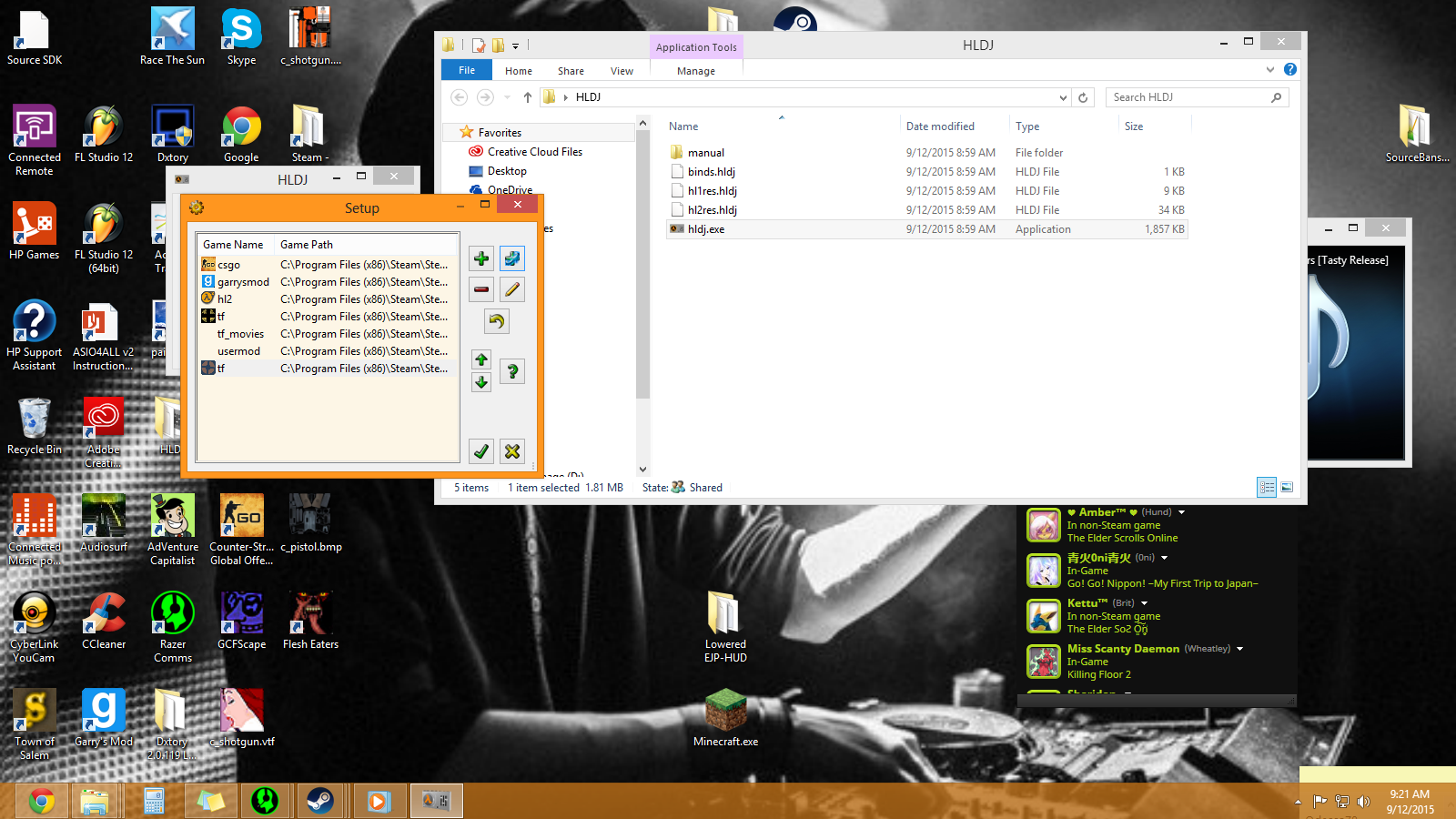 Now you'll see all the games HLDJ found that it can Micspam in. Most of these if not all will be Source games.

Now this, is one of the most important settings that people miss. 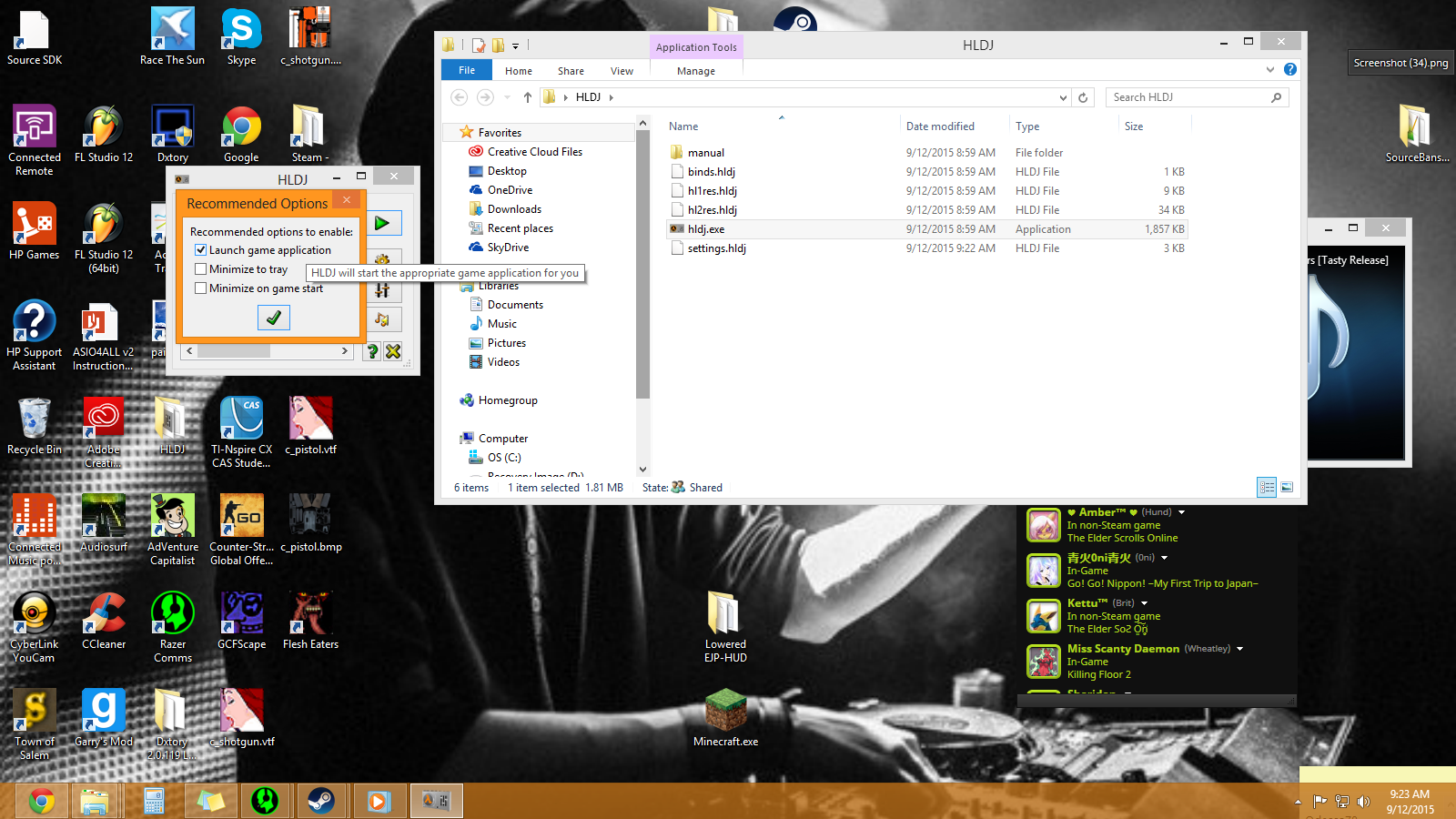 This means that HLDJ will be able to launch games automatically with the press of a button. Very handy.
Make sure it's checked.

The other two options are preference, but I never find myself using them.

Now, we gotta set the game we want to use in HLDJ now. 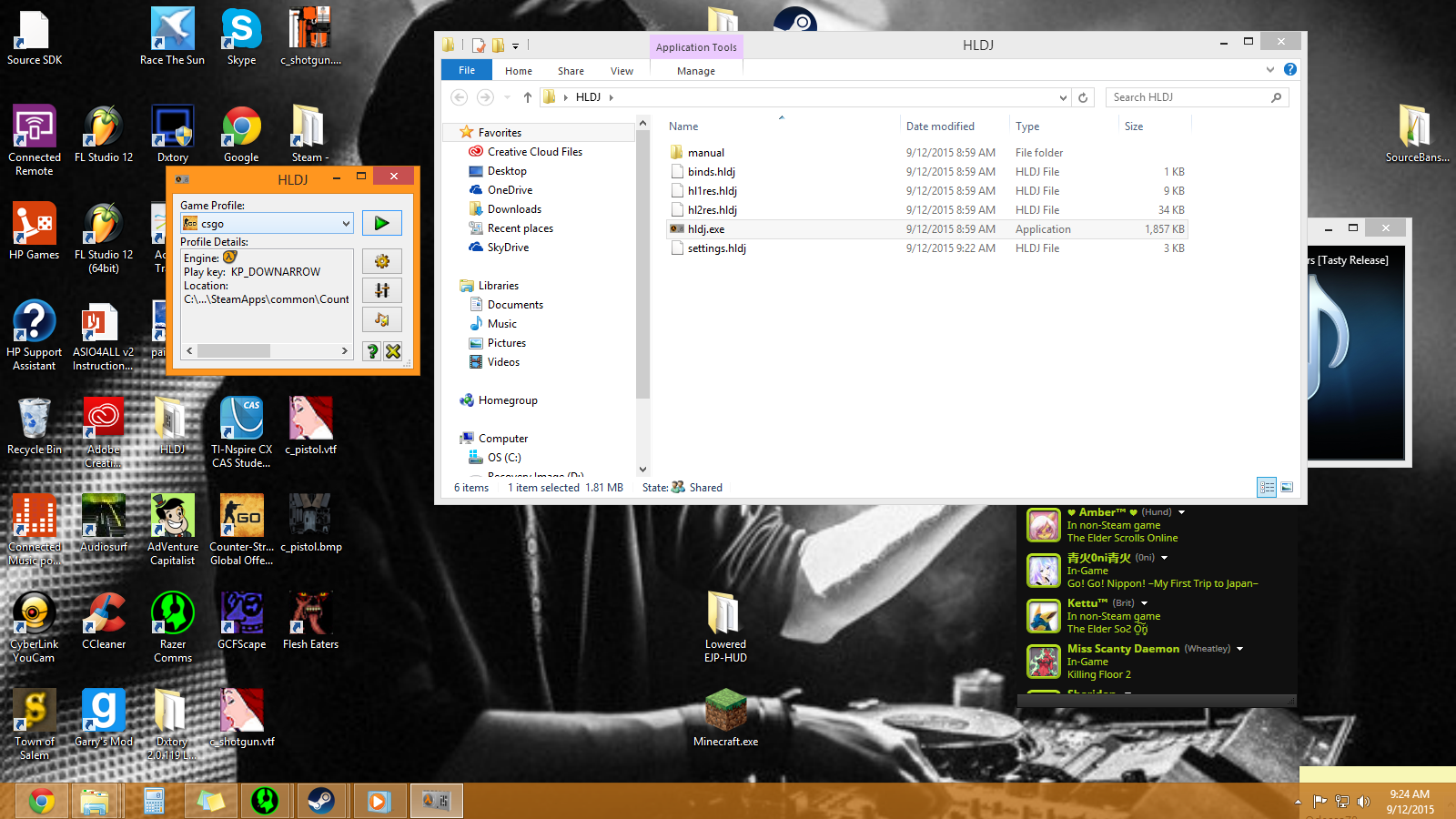 As you can see, it's set on csgo right now. We however don't want that.

Instead, we'll be using TF2.

So! Click on where it says what game it has loaded, and choose whatever game you want from the drop-down list.

tf is what we'll be using for TF2. Which as you can see, is at the bottom of our list. 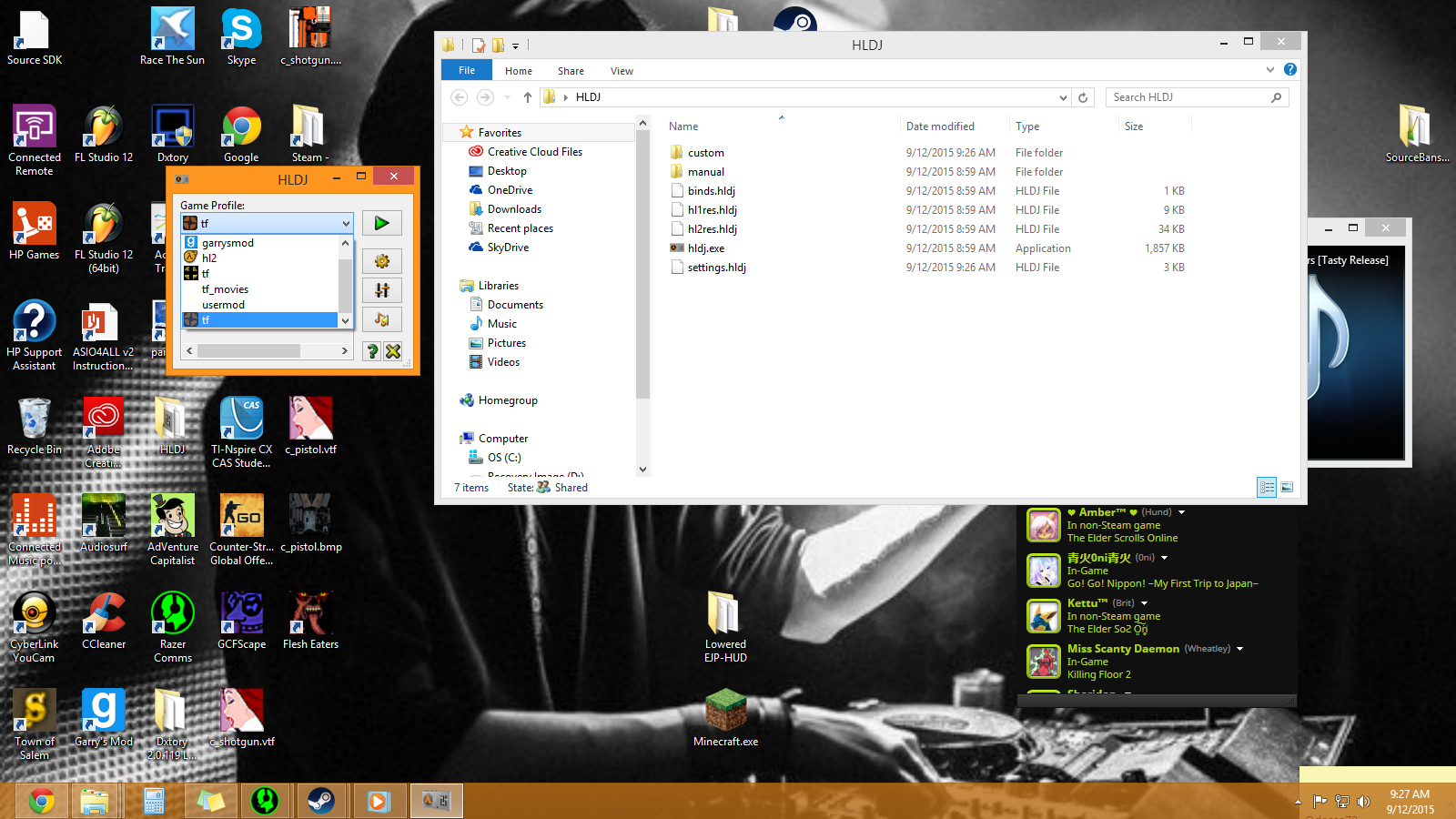 And there you go! HLDJ is fully setup for use. Now we just need something to play...

Adding Spams
Step 100345: Downloading songs or spams.
There's a lot of ways to do this, but if you're cheap like me, then you can use Youtube to MP3 sites to get your stuff.

I highly recommend this site for converting:
http://convert2mp3.net/en/index.php

For this, we'll use Nero - Satisfy 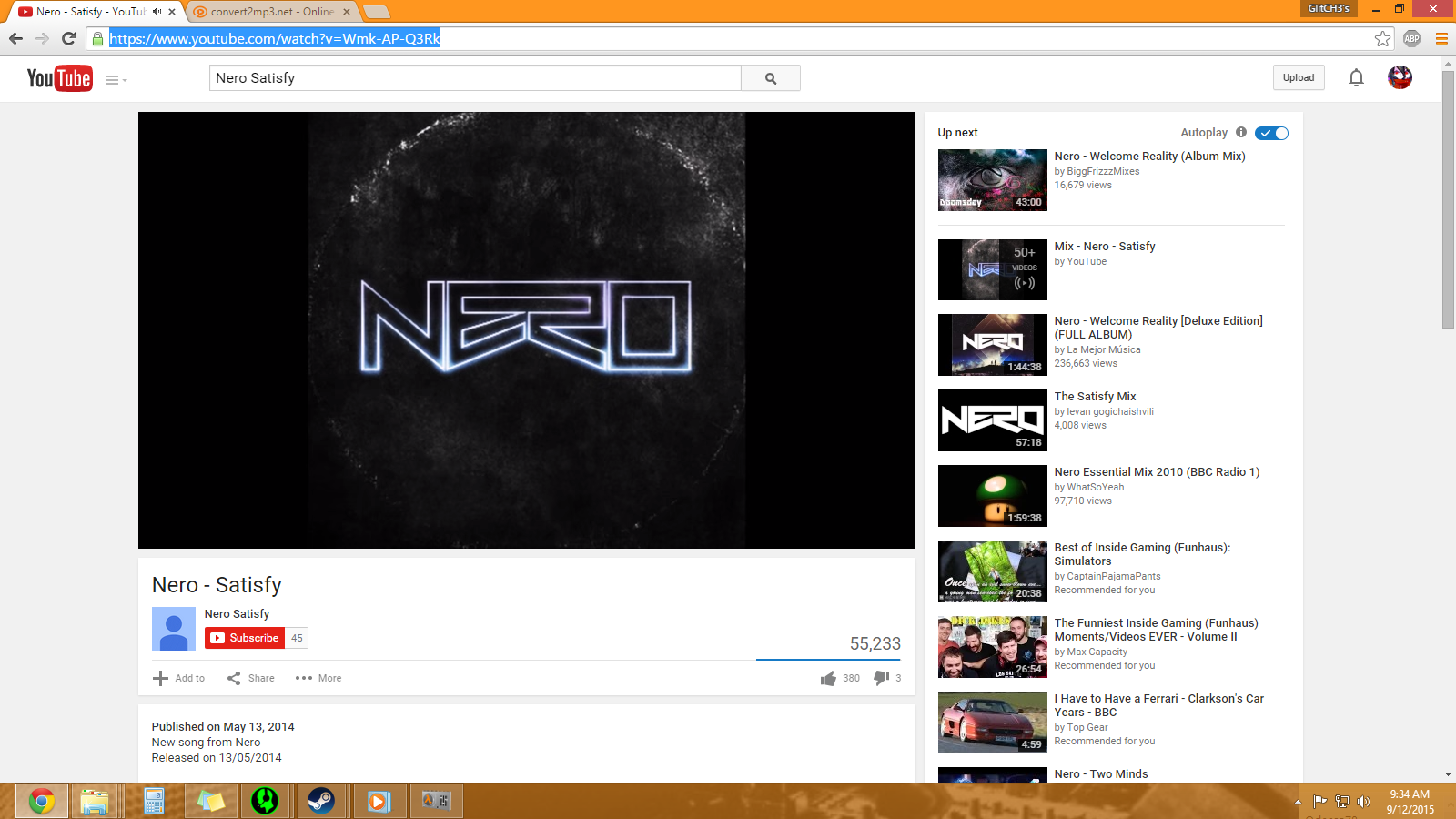 Copy the Youtube link and move it over to your Audio converting site. 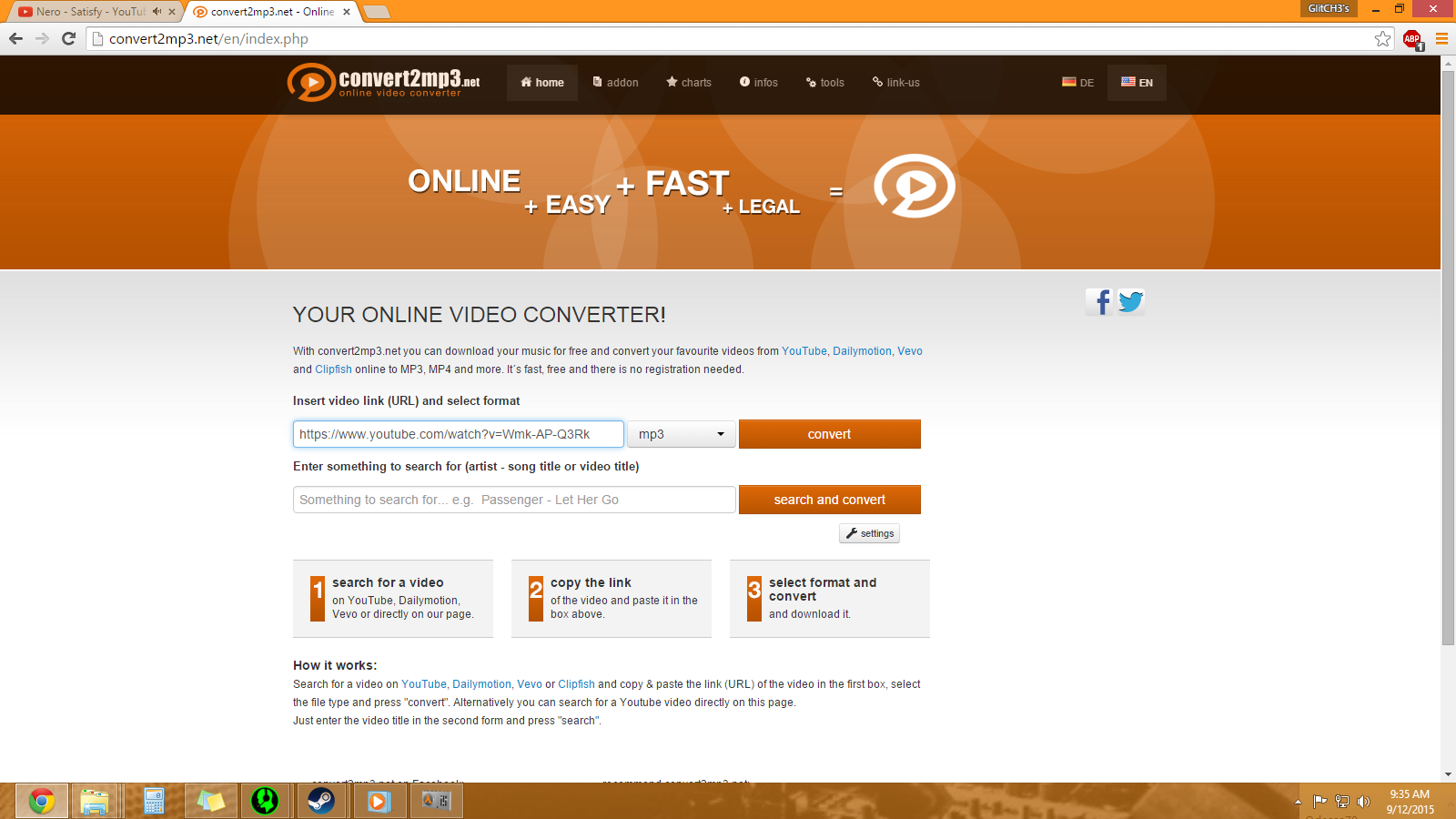 And then convert it to an MP3. The rest is fairly easy as most sites will walk you thru what to do.

Step 0: Audio Editing
*Note* I've never used Gold Wave or other Audio editing programs. So if you aren't using Audacity, try to follow along as best you can with what you have, or go look for some Youtube vids on the subject
Remember when you downloaded Audacity? I hope you do, cause now we need it. 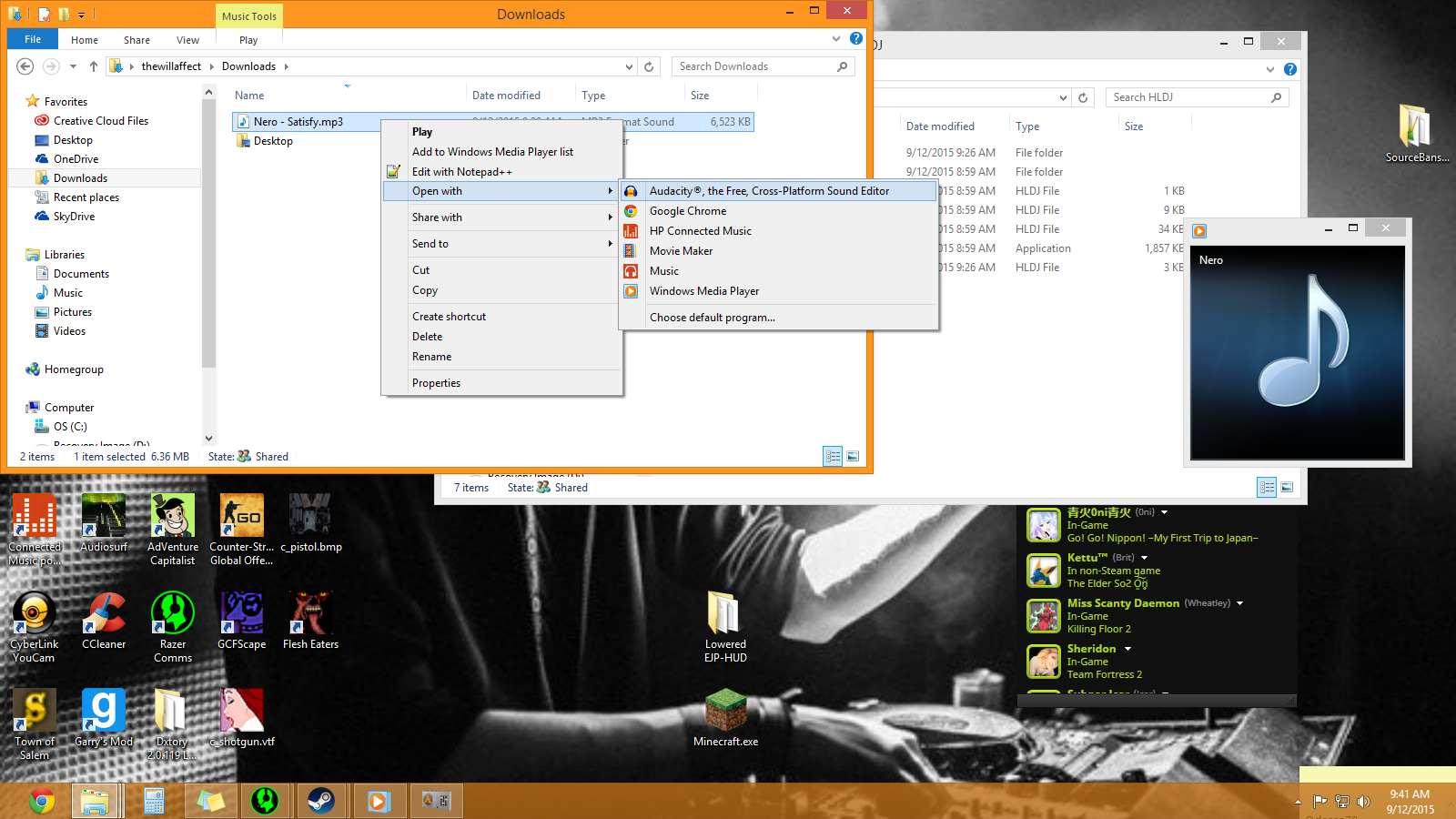 Open your song/spam with Audacity, and let it load up.

Once it's open, you'll see something much like this 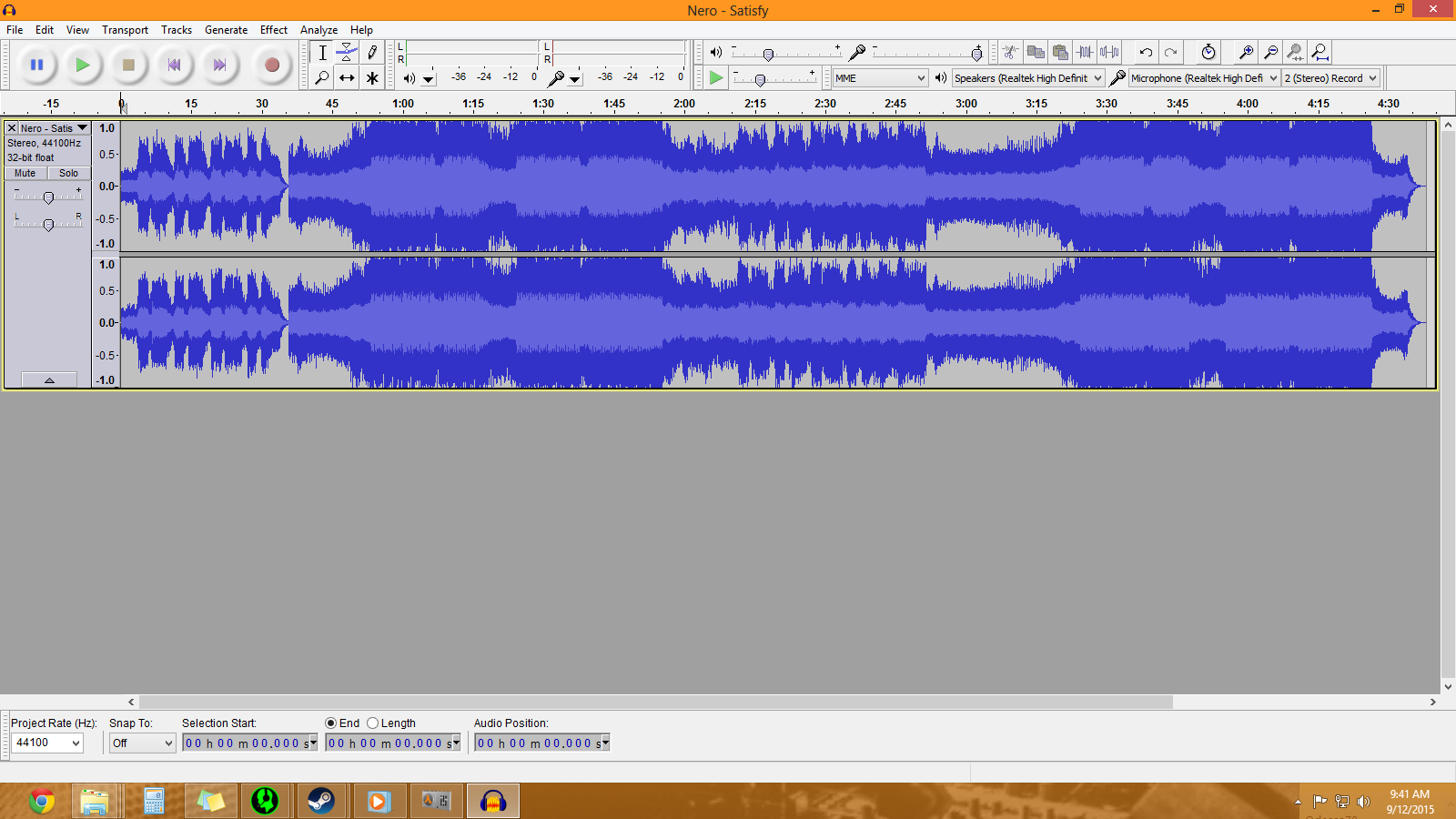 Now we're ready to get this song prepared for HLDJing!

I've found there's only one thing you really have to do to fix most issues with songs in HLDJ
Turn the gain down. 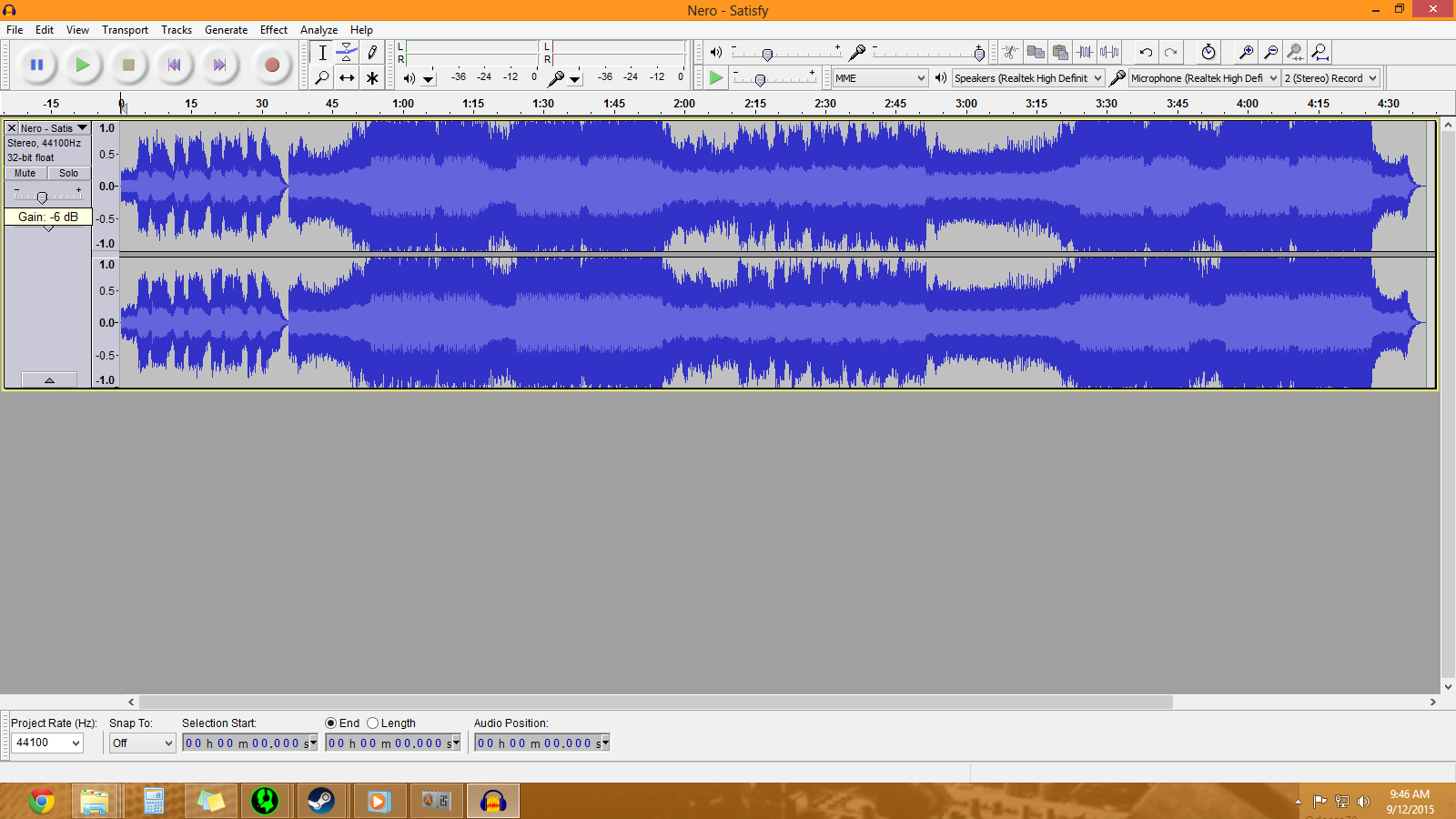 You edit the Gain with the top of the 2 sliders on the left side of the songs sound waves.

In my experience -6 works for most somewhat powerful EDM songs, but as always, not all songs are the same. Different gains for different genres and volumes. Audacity has a lot you can do with it.

After you edit the gain, save your song as an MP3 with Audacity. 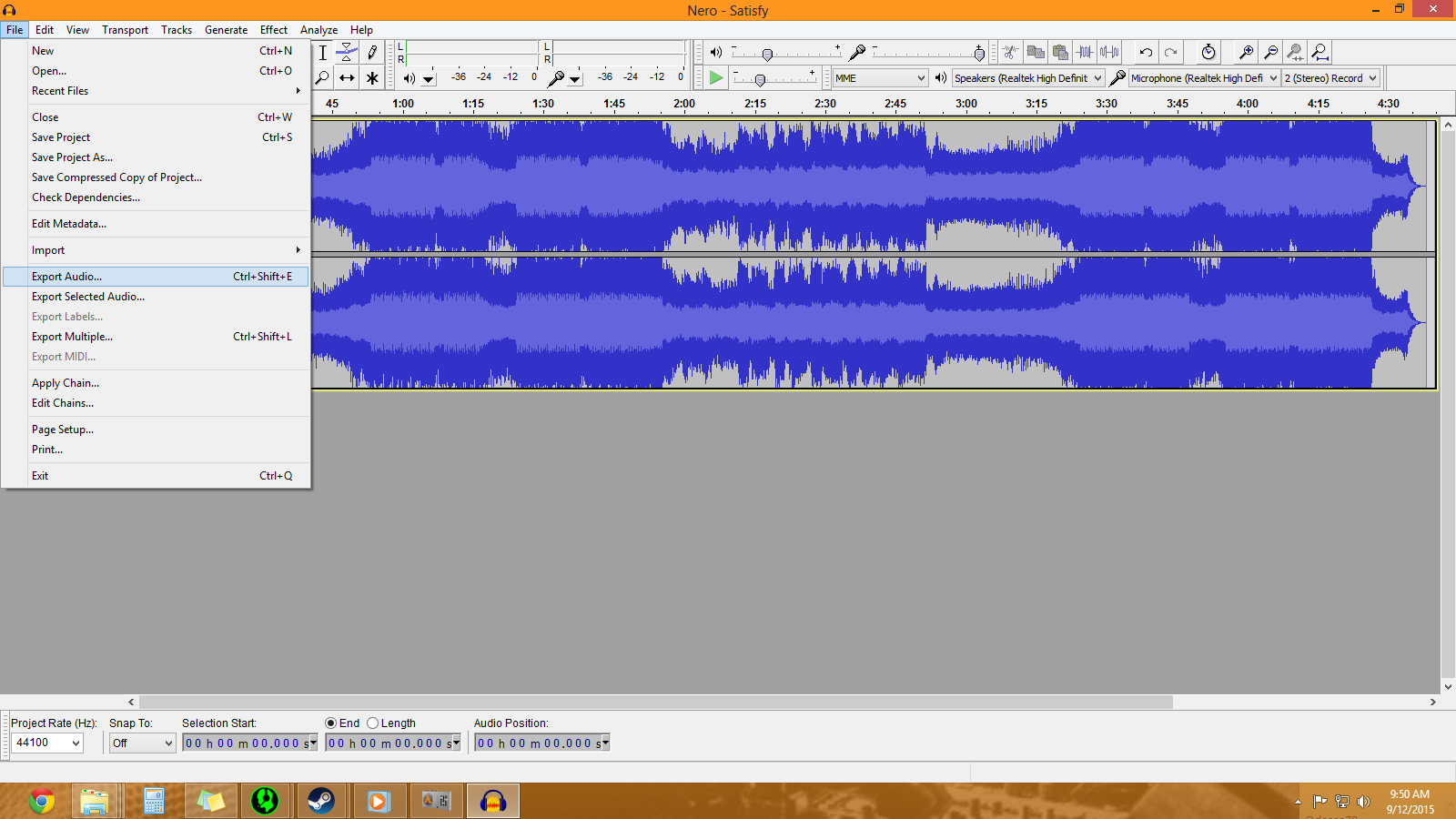 Adding Spams ||2
Now that your song is all converted, let's finish with some HLDJ work yea?

HLDJ will NOT work with MP3's. It needs audio files to be .wav's, which are universally known for bad quality and such.

This is why we lowered the gain on our song. If we were to leave it as it was it would be rediculously loud and have horrible cracking sounds when the bass played and static when the song drops.

If you haven't already, move your fixed song to your spams folder
*Note* You can have the file anywhere, but it makes navigating to our audio input outputs very easy if it's in the Spams folder.

Open HLDJ back up if you closed it, and hit the "Audio Converter" button in the bottom right to begin our conversion. 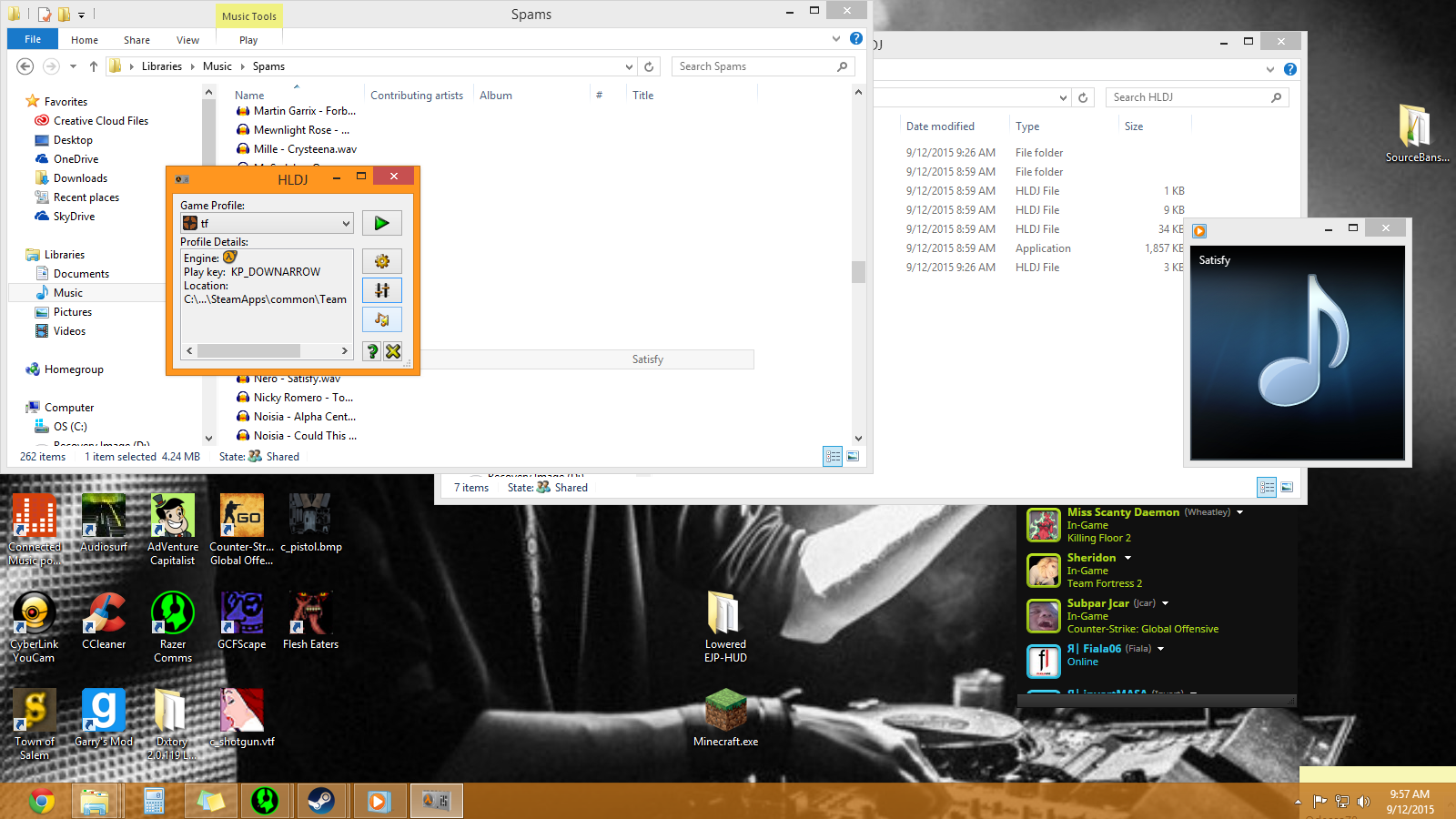 Then you'll be faced with this window 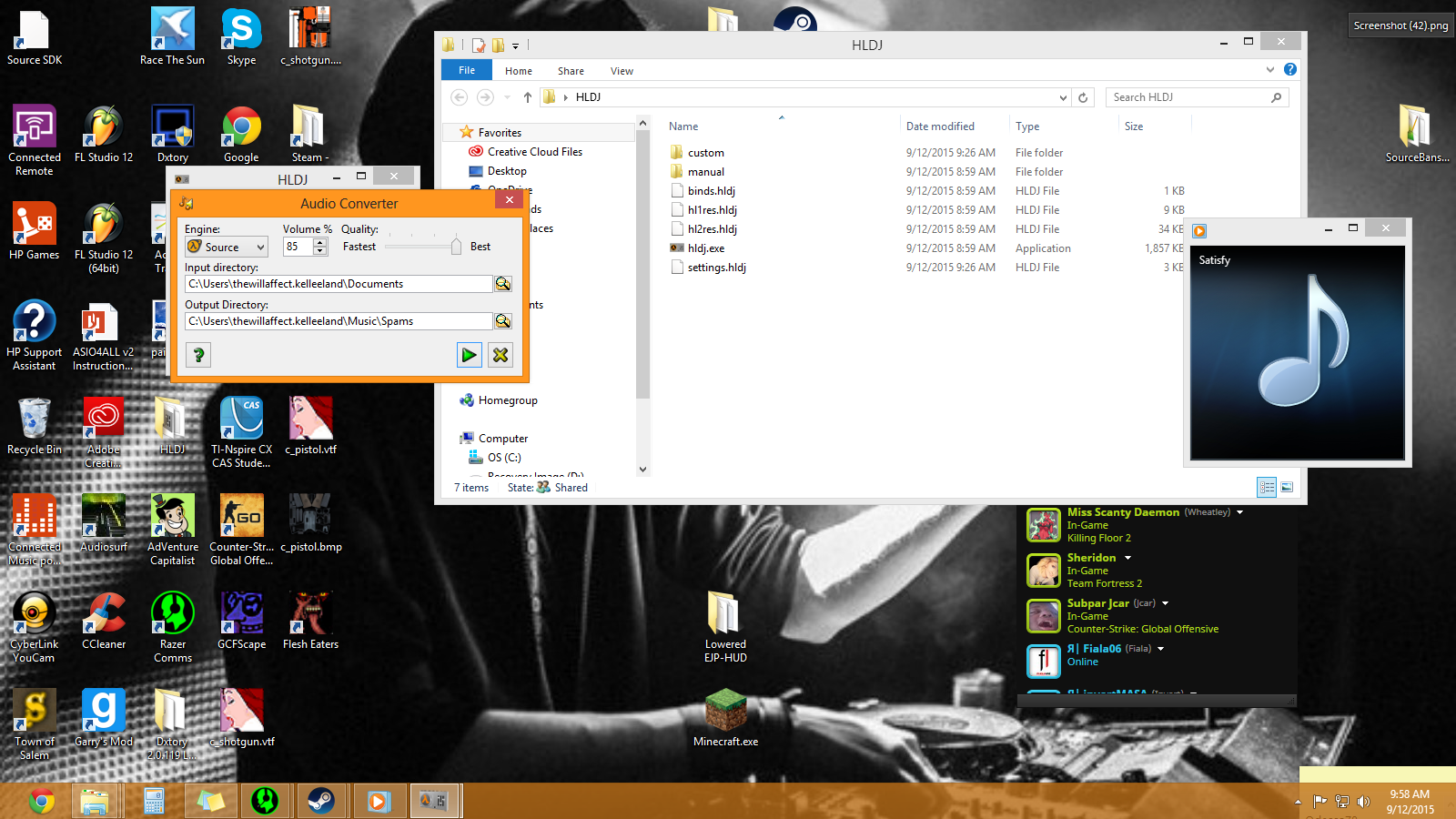 Now, these's a few things you do here. Firstly, you want the quality to be at Best.

Set this via the Slider up top.

Volume is preference and depends on the song, I keep mine at 85%

The final step is to set you input directory to wherever your song/spam is.

If you put it in the Spams folder, simply copy your Output directory and paste it in the Input.

Then hit the green arrow, and let the song convert.

In-Game
HLDJ uses the In-game console for it's spams.

To access your spams, type la into your console.

The load a spam, type in the number that is assigned to the spam.

Then hit your Micspam key and let it play!
Closing
As much of a bad rep that Micspam gets, it is and can be very fun and enjoyable for a lot of people.

Hopefully now with the knowledge you have you'll become a great micspammer that people will find to be breaking the mold of the annoying trolls with it and the passionate music players of the HLDJ lands.

If you guys have any problems post em in a comment below. I'll be happy to help ya out.

Otherwise, thanks for reading, and go get'em tiger.

Zetra_Thornbite Sep 18, 2015 @ 7:13am
Finally someone decided to tell that you can actually do usefull stuff.
I was using HLDJ for short phrases since I was lacking a mic at that time.
< >