Store Page
Arma 3>  Workshop > killjoy's Workshop
This item has been removed from the community because it violates Steam Community & Content Guidelines. It is only visible to you. If you believe your item has been removed by mistake, please contact Steam Support.
This item is incompatible with Arma 3. Please see the instructions page for reasons why this item might not work within Arma 3.
Current visibility: Hidden
This item will only be visible to you, admins, and anyone marked as a creator.
Current visibility: Friends-only
This item will only be visible in searches to you, your friends, and admins. 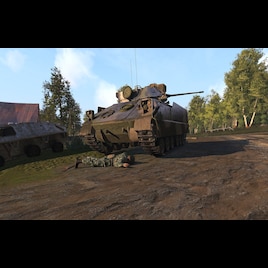 This item has been added to your Subscriptions. Some games will require you to relaunch them before the item will be downloaded.
In 1 collection by killjoy
Czechoslovakian Spring

Fury Troop, 3rd Plt along with Calvary units from Blackhorse Troop, assault the 772nd Recon HQ in the town of Bochov, in an attempt to force the remaining Soviet forces in the region to retreat or surrender.

This is my fith mission in the collection Czechoslovakian Spring, it features a combined arms assault on a fortified town held by Soviet troops.

Feed back whether positive or negative is always helpful. I can't improve unless i know what i'm doing right or wrong with anything. And a rating and a favorite never hurt either ;)

Thanks to Blinkey, Cameron McDonald, and Corporal_Lib for play testing.

Mission, addon, and script makers really don't get enough recognition for all their efforts. I've been playing the series since the OFP demo came out, and the custom content which was released almost from day one was amazing, and after making my first proper mission after all these years i finally appreciate the time, effort and utter frustration (especially getting scripts to work) that goes into making a mission let alone an addon or a script.

Although after the constant play testing, making sure everything works as it should and knowing every detail of your mission is enjoyable, at the end of your finished product there's no more real enjoyment or surprises to be had. The more people that play what I've made, the happier i'll be to know that what i can't enjoy anymore has been (hopefully) enjoyed by the many people that have put so much effort into making the community what it is, and has been for the past 15 odd years.

I tried to do as much research as possible before i start, example regarding this mission - looking for information on the 2nd Cavalry Regiment, the Soviet 22nd Guards, the regions and town names of Czechoslovakia, proper radio protocol - which in the end might not be 100% accurate, but i think it makes a more enjoyable and immersive experience.

So please play, rate, criticize and encourage because in the end i want people to enjoy what I've made, and not just get the numbers if you know what i mean.

killjoy  [author] Sep 22, 2016 @ 2:56am
@Lon'qu The mission may be outdated as it wasn't updated as often as the workshop version. Then again, the whole collection is outdated so it might work fine.

killjoy  [author] Sep 20, 2016 @ 4:16am
The series isn't complete anyway. Mostly because the main mod East Vs West is no longer supported or updated.

killjoy  [author] Sep 20, 2016 @ 12:50am
@Viking Thanks mate, glad you enjoyed em so far. To be honest i've no idea why it might not work. Keep in mind these missions were released a long time ago, with outdated mods and I haven't really touched them to keep them updated.

I have a problem with the 5th tho, i sub to it but it does not show up in my game, i have tried everything you can think of.

+Halina+ Feb 9, 2016 @ 3:04pm
Hi Killjoy, this is some amazing collection, for a long time I was looking for some cold war missions, and finaly got so frustrated that I've started messing with editor myslef. I've sent you a PM if you dont mind, I'm working on similar campagin for some time now and I have a question or two. Good luck on your future missions!

Rubgadi Nov 7, 2015 @ 5:40pm
When I try and start this Scenario, I get a error says missing Woodland_acr,aiabohemia_config any ideas?
< >