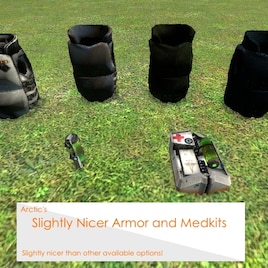 Arctic
Online
See all 5139 collections (some may be hidden)

This item has been added to your Subscriptions. Some games will require you to relaunch them before the item will be downloaded.
Description
New! Join the OFFICIAL Discord server here: https://discord.gg/gaHXusZ

A set of armor and medkits slightly nicer than other available options. Notable features include:

- Plays nice sound when equipping
- Won't attempt to equip if you already have enough armor
- Likewise, won't attempt to heal if you have enough health
- Custom armor models from the Riot Act Team
- Only necessary content included
- Probably would go nice on DarkRP
- Slurping sound, made by me (You're welcome to rip it out and use it and not even give credit, I don't care)

Miscellaneous soft drink. Heals 10 HP, but can overheal up to 110 HP total.

That is literally it. Anyway, it's very similar to this: ( https://steamcommunity.com/sharedfiles/filedetails/?id=151830991 ) addon, though mine is - as the title would appear to suggest - slightly nicer. I'm going to be perfectly honest, it took me far less effort to make this than to make the RP weapons. I don't think I'm going to update this for a while.