Greenlight > Games > DanielSnd's Workshop
Greenlight is being retired. For more information on how to submit games to steam, refer to this blog post.
This item has been removed from the community because it violates Steam Community & Content Guidelines. It is only visible to you. If you believe your item has been removed by mistake, please contact Steam Support.
This item is incompatible with Greenlight. Please see the instructions page for reasons why this item might not work within Greenlight.
Current visibility: Hidden
This item will only be visible to you, admins, and anyone marked as a creator.
Current visibility: Friends-only
This item will only be visible in searches to you, your friends, and admins.
Rocket Fist
Description Discussions6 Announcements3 Comments278

thiagotd
Offline
See all 18 collections (some may be hidden)

View Rocket Fist in the store

I haven't posted here in a while, I'm not sure what's the procedure with greenlight, if people even read those after the game is greenlit, but I figured I'd post anyways D:

The game has been advancing a lot these past few months, I went full-time into Rocket Fist development and I'm working hard to release the game as a full release by the end of april :) If you would like more information or would like to be alerted via email when the game releases, please visit the website: http://rocketfi.st/ There's a "SIGN UP FOR EMAIL UPDATES" part there to enter the mailing list :D For 2016 I set as a personal goal to stream at least twice a week on a regular schedule! I picked mondays and wednesdays from 3pm to 5pm PST!http://twitch.tv/danielsnd

I just had my first stream this monday and It was a lot of fun :D 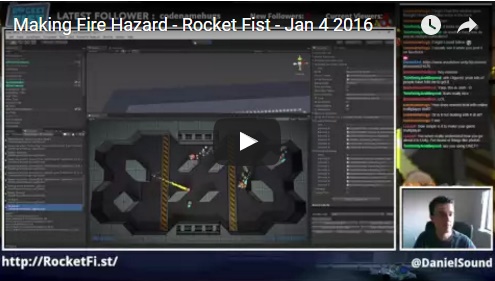 :D If you'd like to always know when I start my stream make sure you give me a follow on http://www.twitch.tv/danielsnd 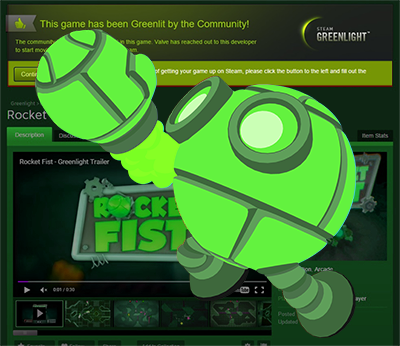 We did it guys! :D We got greenlit in 9 days! Thank you so much for your support in this process, it was great to see so many people excited about our game!!! This were our stats as we got the greenlight: 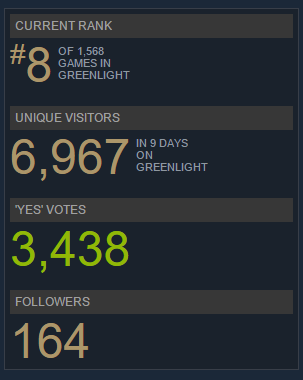 This week I've dedicated entirely to the online mode :) I had to rewrite a good part of the game to make it easier to sync across the network and I can say the code is way cleaner and easier to work with now. It currently syncs all player and weapon actions. I still don't want to "promise" an online mode, but I'm fairly confident about it! ^^ Next step is actually getting the match flow to work on the online mode with game-over state and all. So far I've been testing in a kind of "lobby scene".

Oh! If you're going to PAX, we're going to be expoing the game really close to PAX next week over at the Seattle Indies Expo! Come by and say hi \o

Rocket Fist is a multiplayer arena game with armless robots in chaotic battles with rocket fists. Prove your dexterity and aim against your frenemies killing each other with rocket propelled fists in this frenetic mix of dodgeball and billiards!

Current Progress
We’ve been working on Rocket Fist for the better part of the year, polishing up the core mechanics and making sure the gameplay feels great. The main tech of the game is done and ready, now what is left is to create more content. More levels, powerups, costumes, hazards, music and lots and lots of polish!

You can try an early demo build over at rocketfi.st/demo. If you want to keep track of our progress we keep a devlog updated with all the juicy news on the game! You can find it at rocketfi.st/blog.

Online Multiplayer
This is a question we get a lot. “Is it local multiplayer only or will it also be online multiplayer?”. It would be our first online multiplayer game, but we’ve been doing some tests and we had great results so far. We feel fairly confident that we can get it working (player-hosted, not on the cloud) but we won’t promise anything at this point.

Early Access
We’re considering early access as we feel it could be an interesting way of making Rocket Fist into the game you guys want it to be with the possibility of player feedback during development. We’re still not sure as there are some pros and cons associated with it, we’d love to hear what you think about it before making a decision :)

Languages
As a team of 2 brazilians, we’re mainly going for English (as a main language) and Portuguese, but with a system in place for it, it’s easy to add other languages. If you want the game in your language let us know in the comments or through our email (contact@rocketfi.st).

Mac and Linux
We are currently developing and testing both on a PC and a Mac, we had some users test a pre-alpha Linux build and it seemed to work fine, so we’ll probably be able to target all 3 platforms at launch.

Suggestions and Comments
As a small indie duo we love to read suggestions and comments and we always do our best to answer each one directly :)
You can send them over in the forums here, the comments section or email us ( contact@rocketfi.st )

Questions are welcome in the comments section or contact us directly ( contact@rocketfi.st ).
Thank you again for checking out our page!
Popular Discussions View All (6)

Rocket Fist has been Greenlit and is now listed in the Steam store. For the latest information, purchase options, and discussions for Rocket Fist, please see it on the Steam Store or in the Steam Community.
Visit Store Page
For more details Visit Community Hub
For latest discussions
If you really, really want to, you can continue to the Greenlight page. Information on this page may be out of date, since all the action has moved to the areas noted above.