Greenlight > Games > Denis Lapiner's Workshop
Greenlight is being retired. For more information on how to submit games to steam, refer to this blog post.
This item has been removed from the community because it violates Steam Community & Content Guidelines. It is only visible to you. If you believe your item has been removed by mistake, please contact Steam Support.
This item is incompatible with Greenlight. Please see the instructions page for reasons why this item might not work within Greenlight.
Current visibility: Hidden
This item will only be visible to you, admins, and anyone marked as a creator.
Current visibility: Friends-only
This item will only be visible in searches to you, your friends, and admins.
Mad Snowboarding
Description Discussions7 Announcements2 Comments274 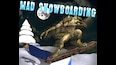 Denis Lapiner
Offline
See all 21 collections (some may be hidden)

View Mad Snowboarding in the store

http://store.steampowered.com/app/399900
Thanks to all the people who have made it possible! Without your support there would be no greenlight for Mad Snowboarding!
Don't forget to check the new character! This character is my "thank you" to all of you!
http://steamcommunity.com/sharedfiles/filedetails/?id=515166361

Hello guys, snowboarders from the world !

Two good news for this end of the week (which is also a great news):

- We are now TOP #52 on Steam Greenlight and counting !
Thank you very much for your support !

- To celebrate this event, we will introduce a new character ! A special funny character with an improvised snowboard ! Do you know what kind of sportsman he is ?

Be ready to snowboard ! Mad Snowboarding is cominggggggg...

Read More
Description
Release date: Released
Mad Snowboarding - a crazy open world snowboard game. Reach the finish and make as many tricks as possible on your way down the mountain. Mad Snowboarding has a built-in level editor, which allows you to create own levels and share them with the community. This way there are always new levels to explore. Fight for daily worldwide highscores or challenge up to four of your friends to play simultaneously either with or against you in the split screen mode!

Mad Snowboarding's community is strong and has created more than 500 levels with the built-in level editor.

DEMO/TEST HERE:
http://www.freebord-game.com/index.php/ms
For more information and to test the game you can visit our official website under the link above.
Popular Discussions View All (7)

ETA for release if Greenlit
Lantea

Mad Snowboarding has been Greenlit and is now listed in the Steam store. For the latest information, purchase options, and discussions for Mad Snowboarding, please see it on the Steam Store or in the Steam Community.
Visit Store Page
For more details Visit Community Hub
For latest discussions
If you really, really want to, you can continue to the Greenlight page. Information on this page may be out of date, since all the action has moved to the areas noted above.