Greenlight > Games > Armor Games Studios's Workshop
Greenlight is being retired. For more information on how to submit games to steam, refer to this blog post.
This item has been removed from the community because it violates Steam Community & Content Guidelines. It is only visible to you. If you believe your item has been removed by mistake, please contact Steam Support.
This item is incompatible with Greenlight. Please see the instructions page for reasons why this item might not work within Greenlight.
Current visibility: Hidden
This item will only be visible to you, admins, and anyone marked as a creator.
Current visibility: Friends-only
This item will only be visible in searches to you, your friends, and admins.
Sentry Knight Tactics
Description Discussions6 Announcements1 Comments234 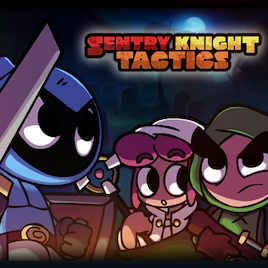 TylerNG
Online
See all 27 collections (some may be hidden)

We did it! Because of all of your support and interest, we are greenlit. We just want to take a moment here to express our gratitude to you all. So Thanks!

Now What?
Having been greenlit, we’ve proven ourselves and are able to move forward with development for real. As we’ve expressed, our goal is to release the game sometime early 2016.

All of the content in the trailer and screenshots is very early development stuff. It’s only a tiny percentage of the content we’re cooking up. We’re super stoked and hope you will enjoy the game as much as we will making it.

We’ll be sharing more in-depth info on the game and some development insight on the blog. Expect to see posts about how we handle and solve design, programming and animation challenges.

Til Next Time!
- Tyler and Justin
Read More
Description
Release date: Winter 2016
Sentry Knight Tactics is an action-strategy adventure game with epic quests, hordes of enemies to slaughter, beautiful environments to explore, and lots of treasure to loot.

Command your team of powerful heroes and lead them to victory. Upgrade your party by unlocking new characters, looting powerful gear, and leveling up.

Improve your team, learn new special attacks and unlock new abilities in each character’s unique skill tree. Change your skills on the fly to deal with new challenges.

Sentry Knight Tactics is a mix of an adventure story, tactical real-time gameplay, and RPG elements. This game takes place directly after the events of the Sentry Knight Conquest web game.

Production on this game has just begun. An early winter 2016 release date is planned.

Q: Will this game also be on the web like earlier Sentry Knight games?
A: Still hammering out the details; more on that later.

Q: I thought the Knight died in Sentry Knight Conquest. What’s up with that?
A: Sounds like someone didn’t beat the game :P

Q: How much will this game cost?
A: Pricing information coming soon.

The game is done! We're still doing some bug-testing and will announce a release soon.

Sentry Knight Tactics has been Greenlit and is now listed in the Steam store. For the latest information, purchase options, and discussions for Sentry Knight Tactics, please see it on the Steam Store or in the Steam Community.
Visit Store Page
For more details Visit Community Hub
For latest discussions
If you really, really want to, you can continue to the Greenlight page. Information on this page may be out of date, since all the action has moved to the areas noted above.