Greenlight > Games > IronJag's Workshop
Greenlight is being retired. For more information on how to submit games to steam, refer to this blog post.
This item has been removed from the community because it violates Steam Community & Content Guidelines. It is only visible to you. If you believe your item has been removed by mistake, please contact Steam Support.
This item is incompatible with Greenlight. Please see the instructions page for reasons why this item might not work within Greenlight.
Current visibility: Hidden
This item will only be visible to you, admins, and anyone marked as a creator.
Current visibility: Friends-only
This item will only be visible in searches to you, your friends, and admins.
Hierarchy
Description Discussions8 Announcements7 Comments274 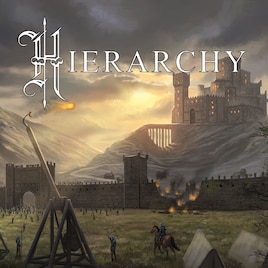 IronJag
Offline
See all 34 collections (some may be hidden)
Recent Announcements View All (7)
WE ARE GREENLIT!
July 13, 2015 - IronJag

We are officially greenlit, Thanks alot for the votes.

Make sure to register on the forums for all further news and discussions
https://hierarchygame.com/forum/

Also back us on kickstarter
https://www.kickstarter.com/projects/ironjag/hierarchy

We are #6 on Greenlight right now. thanks alot for the support.

Remember to go sign up on the Forums to keep track of everything that is new.
https://hierarchygame.com/forum/

Read More
Description
Release date: 2016
Hierarchy
Hierarchy Is a Multiplayer Medieval Sandbox RPG. The game’s main focus is on creating an environment where players fight for control of territory and power through economy and war. The game gives players the option to play how they want. You can choose to be a lord, if others will follow you. You can become a soldier, farmer, hunter, merchant, blacksmith, or you can be a outlaw and prey on the weak. You can lead an evil cult or cleanse the world of all evil in the name of your religion. The possibilities are endless with a mixture of both game mechanics and ease of roleplaying.

Key Features
Faction System
The faction system is the heart behind the freedom to choose what you want to do and who to do it with. Together with friends, you can create a Faction for anything. Become a lord of justice, an evil count sacking lands, reach others through trading, or pry on caravans as bandits. Create your own religion and conquer the world with your faith! There are no limits to what kind of faction you can create.

Combat
Combat is one of the most important aspects of Hierarchy. We feel that Combat has to be immersive and based on skill. We have implemented a directional combat system most similarly compared to the combat from Mount & Blade: Warband.
All combat mechanics will be twitch-based; no target-locking or % chance-to-hit. Melee swings hit based on whether or not your weapon actually strikes the target. Ranged projectiles are actually projectiles. Firing an arrow through the brush is a good way to lose it. Arrows and boulders will arc based on how they were fired. Players will also be able to fight on horseback. A good cavalry charge can shatter player formations and win battles.

Land Control
Hierarchy is a large open world that can all be controlled through player owned landmarks such as castles, guildhalls, churches and also through land occupation like bandits controlling of a mine with precious resources. The main form of control is castles, all castles are unoccupied at start and can be purchased by any faction throughout the game. Otherwise, they can be sieged from the current faction holding the castle. All castles are unique in defensive positions, land control, and resource availability. To capture an enemy castle you must declare war and skillfully fight your way to the top of an enemy keep to replace their banner with your own factions banner.

Persistent Economy
In the world of Hierarchy if you wish to become a merchant of riches you must skillfully determine which towns and villages require resources that are low in stock.
For example, you may travel to the villages to the north and purchase their iron or mine the iron. After obtaining the iron, you may travel south where coastal towns are in low supply of iron. Thus, you could sell your iron there for maximum profit.
The prices of all resources constantly change depending on players interactions. If a resource is abundant prices will drop, but only in that one village or town that has higher stock. So you must always constantly be on the look out for new towns and villages.

Professions & Skills
Professions and Skills can be selected based on how you want to play. You can perform any job but your selection of professions and skills will greatly affect your ability to perform the job. Skills will help you specialize in combat, athletics, horseback riding and others. Professions will allow you to better select the path you want to take. Lumberjacks, miners, hunters, farmers, fishermen, blacksmith, craftsmen, engineer.
Popular Discussions View All (8)

What's going to be the price on this...
fiery