Greenlight > Games > HanibaL's Workshop
Greenlight is being retired. For more information on how to submit games to steam, refer to this blog post.
This item has been removed from the community because it violates Steam Community & Content Guidelines. It is only visible to you. If you believe your item has been removed by mistake, please contact Steam Support.
This item is incompatible with Greenlight. Please see the instructions page for reasons why this item might not work within Greenlight.
Current visibility: Hidden
This item will only be visible to you, admins, and anyone marked as a creator.
Current visibility: Friends-only
This item will only be visible in searches to you, your friends, and admins.
Renegades from Earth
Description Discussions0 Announcements2 Comments104 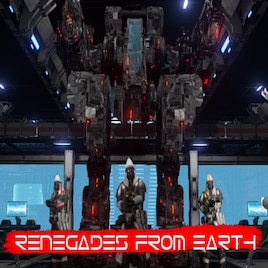 We want you to be part of the development of "Renegades from Earth", but how? follow us on our facebook page, we will be receiving suggestions and publishing new ideas like:

we're developing a cooperative video game and we want to create a place where players enjoy a functional experience helping each other, making a game by gamers for gamers.

Please be part of this!

We added new features on the description about our videogame "Renegades from earth" and we are very happy for your interest and support, we know we can not satisfy everyone, but we're still working on it, We are a team of 2 people and is a little difficult for us but we really want to get this project done... thanks!

Read More
Description
Release date: November/2017
Renegades from Earth.
it’s a futuristic shooting game of 4 players co-op, There’s 3 soldiers and a mech, where you can choose between this four classes: medic, support, engineer and pilot(mech).

Story
In year 3028 after taking to the limit our planet earth, mankind was forced to colonize new horizons in space, searching resources and lands to prosper. For this an Alliance was created between super potency countries, which would help to conquer new planets investing in technologies and military forces, and so make new cities and settlements for people to exploit their resources. In the beginning of this alliance it consisted with honorable and respectable men, specially trained to expand our territories, but something was delaying the colonizations, in some planets there are certain creatures like us which dominated the other species, forcing the alliance to make a decisión, includ the most despicable men in the allied troops, men as murderers, rapists, psychos, etc. These conscripts were tricked with false tales of freedom forcing them to carry out crazy objectives and investigations, to achieve the primary objective of humanity, expand the human race and create new habitable places, but at what cost…

Classes
Medic: This class takes care of the lives of their mates, it has more mobility in the field comparing him with their teammates, he can throw medic kits, it has double jump using the jetpack, assault rifle like primary weapon and shotgun like secondary weapon and you can unlock a medical gun replacing the medic kits.

Support: This class is responsible for maintaining the ammunition of their mates and also is the tank of the team, it has more vitality tan their teammates, he can throw ammo kits and recharge the shields of his mates, and heavy guns like primary weapons.

Engineer: This class is responsible for repairing the mech and interact with the mechanics problems in the map, he can deploy turrets to help the defence while his occupied with others things, it has differents types of ammunition like explosive bullets and sniper mode on his rifle assault.

Pilot(Mech): This class controls the mech and cares for his mates, fighting creatures of big sizes. He provide support with highly heavy weapons like missiles and large caliber rifle, it has the ability to ask for air support and can make the time slower around him.

javierucu Feb 4, 2016 @ 6:52am
hi, i think Renegades from Earth looks fantastic. I love horror games. Now i´m finishing the working in other game and it would be great to cooperate with such a promising team. I think my work could fit perfectly in your project. You could listen my music here: https://www.youtube.com/watch?v=pA7fQzZ9gUU Could we talk about it? my email is: cga.sound@gmail.com Thank you.

creation111kill Aug 5, 2015 @ 6:28pm
if i could get a review copy oftisgame idbe happy to give my thoughts on behalf of my coompany

SaberViper Jul 24, 2015 @ 7:02pm
Everyone fights, no one quits. I'm in agreement with people that the sounds/effects need a bit of work but the basics look solid, I'll give this my yes vote on the basis that you guys are still working on it and so it seems like it could only go up from here.

Ruder9 Jul 23, 2015 @ 12:46pm
There's no force behind the attacks, the framerate needs work, and the enemies look completely devoid of variation.

coronamorph Jul 21, 2015 @ 11:09pm
And use some aliens that werent obviously bought off an asset store. Seriously, alien spiders have gotten old