Store Page
Dota 2 >  Workshop > Mahou Shoujo's Workshop
This item has been removed from the community because it violates Steam Community & Content Guidelines. It is only visible to you. If you believe your item has been removed by mistake, please contact Steam Support.
This item is incompatible with Dota 2. Please see the instructions page for reasons why this item might not work within Dota 2.
Current visibility: Hidden
This item will only be visible to you, admins, and anyone marked as a creator.
Current visibility: Friends-only
This item will only be visible in searches to you, your friends, and admins. 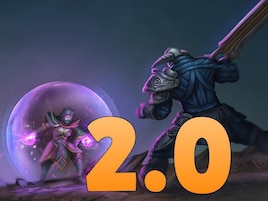 Mahou Shoujo
Offline
See all 62 collections (some may be hidden)

This item has been added to your Subscriptions. Some games will require you to relaunch them before the item will be downloaded.
Description
Join our Discord: https://discord.gg/BrQeMvw
Remember, this game has no matchmaking and it's not possible to do yet!

The island is crumbling!
First custom game with destructible terrain!
Skillshot-based PvP and over 30 unique characters[cia-is.moe]!

HOW TO PLAY
-Each round select one of the over 30 unique heroes[cia-is.moe]!
-Survive!
-Earn score points by surviving each round!
-Win once after reaching point limit to win!

TIPS
-Every hero has a basic attack which can be used with left click!
-Ultimate abilities unlock over time
-The island shrinks, don't stay close to the edge
-Ground will start crumbling under your feet after it finishes shrinking, keep moving!

Mahou Shoujo  [author] Mar 10, 2022 @ 12:42pm
Ok fixed, thanks for pointing the problem out. If any localization is missing, send me another message