Store Page
Cities: Skylines>  Workshop > RoboAsimov's Workshop
This item has been removed from the community because it violates Steam Community & Content Guidelines. It is only visible to you. If you believe your item has been removed by mistake, please contact Steam Support.
This item is incompatible with Cities: Skylines. Please see the instructions page for reasons why this item might not work within Cities: Skylines.
Current visibility: Hidden
This item will only be visible to you, admins, and anyone marked as a creator.
Current visibility: Friends-only
This item will only be visible in searches to you, your friends, and admins. 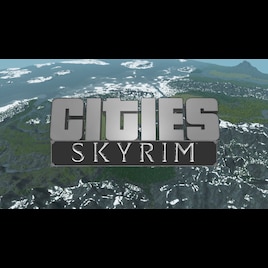 RoboAsimov
Offline
See all 286 collections (some may be hidden)

This item has been added to your Subscriptions. Some games will require you to relaunch them before the item will be downloaded.
Description
By popular demand: a Skyrim map.

I strove to be as accurate as possible, but I had to take some liberties when necessary. Firstly, this map may not be exactly to scale, since it's difficult to pin down an exact size of Skyrim. Some posts I've seen online pin Skyim's dimensions as 5.1km x 3.2km, which is roughtly 3 x 2 city blocks. That is tiny and not very fun to play on. Next, my starting point was this heightmap[www.nexusmods.com], by Transbot9. It was an excellent baseline, but some islands in the Sea of Ghosts I can't identify, so they might not be lore-accurate. I chose to leave them in. Hopefully someone can school me on the lore in the comments. Additionally, the terrain was sculpted a bit to get water to (mostly) flow correctly, and to give the map more buildable area.

Recommended Mods:
All Spaces Unlockable by S. Klyte
All of these amazing daedric statues by Sotonian

Directions for adding snow texture:
1) Subscribe to hyperdrive_engage's Terrain Texture Replacer mod.
2) Enable it in-game in your content manager (found in the main menu).
3) Download this[c1.staticflickr.com] image and save it as sand_texture.png
4) Place sand_texture.png in the folder C:\Users\YOUR NAME HERE\AppData\Local\Colossal Order\Cities_Skylines\Addons\Mods\TerrainTextureReplacer NOTE that you might have to create this folder yourself if it doesn't already exist.
5) Start a new game with the map!

If you want to go back to the default sand texture, just rename the snow texture anything else or delete it.

Notes:
- Rather than carve up Skyrim with freeways, I chose to build a few outside connections and let you figure out how you'd like to build your transportation infrastructure. Highway connections reach from Morrowind in the east, and from High Rock in the west. A rail connection comes up from the south and ends in Falkreath. Road, rail, sea, and air connections are available.
- Stemming from the point above, I chose Riften as the starting tile.
- Whiteun, Eastmarch, and the Rift are the easiest areas to build on. Hjaalmarch is a swampy mess just like in Skyrim.
- All resources are represented on the map. Fertile land around Whiterun, oil in Eastmarch, and trees in Falkreath and the Rift. Ore can be found on the map where Skyrim's mines are located.
< >
61 Comments

The_Emperror Feb 2 @ 4:30pm
I'll say this - the pictures do nothing to sell me on the map... All volumetric lighting garbage and inadequate screenshots do not tell me at all if this map is any good for playing. Maybe add a couple of actually gameplay related images...

Palowammax Jan 20 @ 9:20am
When I open this map 1st time my spotify starts playing Dragonborn theme! What are the odds for this to happen?! Amazing map btw, gj!