Greenlight > Games > Armor Games Studios's Workshop
Greenlight is being retired. For more information on how to submit games to steam, refer to this blog post.
This item has been removed from the community because it violates Steam Community & Content Guidelines. It is only visible to you. If you believe your item has been removed by mistake, please contact Steam Support.
This item is incompatible with Greenlight. Please see the instructions page for reasons why this item might not work within Greenlight.
Current visibility: Hidden
This item will only be visible to you, admins, and anyone marked as a creator.
Current visibility: Friends-only
This item will only be visible in searches to you, your friends, and admins.
The Adventure Pals
Description Discussions9 Announcements6 Comments177

View The Adventure Pals in the store

Store page
Recent Announcements View All (6)
Help us out on Kickstarter!
July 30, 2016 - Corupted

Last night we Launched The Adventure Pals on Kickstarter, This a super exciting occasion! We've been working on this game for over three years now. With your support, we can finally finish it off and make the game we always wanted to make. We'd really appreciate if you could even just check it out!

Why you'll love it:
- Hyper-Realistic Giraffe Physics.™
- Over 100+ levels, including towns, and interesting things.
- At least three semi-okay puns.
- Play with your friends on local 2 player co-op play.
- A retrospective look on Hot Dogs.
- Immersive story and lovable characters

Check out the Kickstarter!
Thanks again,
- Julian <3 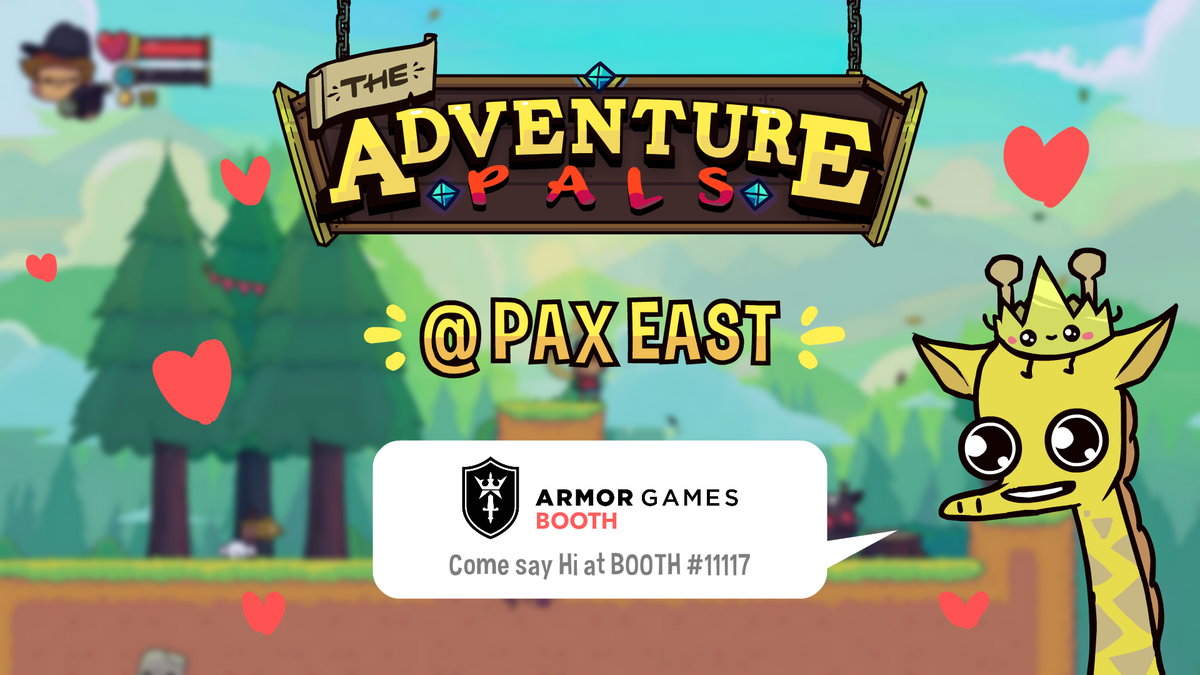 We’ll be exhibiting at PAX East alongside the amazing Armorgames who have pimped out a booth for us along with four other games. There’s sweet games & Prizes aplenty including a giraffe beanie hat, giraffe shirt and PINNNSSS oh and some sweet art cards. So be a PAL and come say “HI! I really think you’re pretty cool and I like your stuff”.

In other news… We’ve changed the name of the game!!
Introducing “The Adventure Pals”

That’s right the game is now slightly easier to pronounce! The name change came after a discussion that’s been going on for a while. Which went a little like this:
“Why should I buy the sequel I’ve never even heard of the first one!”

Also the first game sucks weenies compared to the new game, so we wanted to not associate too closely with it.

This new promo art is brought to you by myself and Janice Chu[corupted.com]

So now that’s out of the way let me introduce you a little more to the land of adventure pals!
Grasslands
The Happy Forest lands filled with an abundance of trees, angry deer and squirrels.

The Wasteland Wastelands
The dinosaurs have come back in time, spilled nuclear waste everywhere and are trying to rough it out!


We can’t give away all of our goodies!

So there you have it, we have most of a game right there! not long now until you’ll see that launch date.


– Julian & Jay <3
Read More
Description
The Super Adventure Pals series is back for another action-packed story, but this time the stakes are higher, the characters are wackier and the pets are more… giraffeier?

The sequel to the award winning Super Adventure Pals, ride your giraffe across an open world, discover secrets, bash up some baddies and enter a colorful world of laughter and adventure where using a giraffe’s tongue as a helicopter propeller is a legitimate means of transport.

The Adventure Pals is a lovable action RPG platformer in which you travel the land and battle monsters-a-plenty in an epic quest to rescue your Papa from the evil Mr. B who is hell-bent on turning him into a hot dog! But fear not, for you are not alone; you have the help of your good friends the Giraffe and your pet rock Mr. Stone!

Level up along the way for new weapons, stats and hat colors, fight a wide range of enemies and defeat Mr. B in a number of epic boss fights. Interact with NPCs in towns and visit the shop to stock up on equipment and buy new abilities. See the Blacksmith to craft upgrades for your weapons and replay levels for diamonds which can be used to buy unique abilities.

The game begins as a simple rescue story; Mr. B kidnaps your father in front of you and immediately the clock begins ticking. You must get him back before your Papa is turned into a tasty meat-based snack (garnished with a splattering of mustard and a side of pickles) in Mr. B’s burgeoning fast food empire. However, things are not as simple as they first seem and before you know it your journey takes you face to face with zombie pirates, giant evil trees, bosses made of breakfast foods, your very own evil clone and of course, post-apocalyptic dinosaurs! It will be a huge adventure, but with your friends by your side you can take on anything… can’t you?

At its heart, The Adventure Pals is a platforming game; dodge traps, combat monstrous enemies and hop into giant toasters to be launched skyward. use your Giraffe’s neck as a grappling hook and his tongue as a helicopter propeller. Throw your pet rock at nearby enemies and catch him as he boomerangs back to you. There are sword fights, treacherous leaps of faith and an abundance of bad guys in this exciting tale of friendship, imagination and most importantly, adventure!

Super Adventure Pals features some very stripped back RPG elements, such as gaining XP from killing enemies and leveling up to upgrade your stats. Pick from health, attack damage or upgrading Mr. Rock (your ranged attack). Each level-up is accompanied by a visual cue, so for example, upgrading your attack damage gives you a bigger and better weapon, while upgrading Mr. Rock might give him a cool pair of sunglasses!

Each area has a main town as well as a number of smaller NPC locations on the world map. Each one has a different theme and is filled with colorful and lovable NPCs who give you quests and items. This is also where you can find the blacksmith who can craft temporary weapon upgrades for you, so long as you can pay the price!

Each town has a shop associated with it which sells potions, bombs and other supplies. But most interestingly they all stock their own unique special items, which can only be purchased with diamonds, which can only be earned by replaying levels. These items give you a special ability, rewarding those true adventurers who replay completed areas.

Ride your giraffe across an open world map to get between levels, towns, secret locations and resource areas. Levels are locked until they are revealed to you through quests while some areas of interest can be discovered at any time, so long as your heart is true, your spirit is brave and you are willing to explore.

We would love to hear ideas for the game and if you have any feedback, suggestions or ideas please let us know and we can also answer any questions you might have in the comments section below.

Play the original game on Armor Games: {LINK REMOVED}http://armorgames.com/play/13529/super-adventure-pals
We loved making it and really hope we can create the next and bigger and better chapter of the Super Adventure Pals!

Tj Plays Jun 14, 2017 @ 5:05am
My girlfriend pre-ordered this as soon as we got home from EGX Rezzed, with a projected release date of April at the time. Could we please receive a release date, or get a refund as looking at the history of this project, the game is going to continue to be put off and we'll never receive what we paid for.

The Adventure Pals has been Greenlit and is now listed in the Steam store. For the latest information, purchase options, and discussions for The Adventure Pals, please see it on the Steam Store or in the Steam Community.
Visit Store Page
For more details Visit Community Hub
For latest discussions
If you really, really want to, you can continue to the Greenlight page. Information on this page may be out of date, since all the action has moved to the areas noted above.