Store Page
POSTAL 2>  Workshop > awgsknite's Workshop
This item has been removed from the community because it violates Steam Community & Content Guidelines. It is only visible to you. If you believe your item has been removed by mistake, please contact Steam Support.
This item is incompatible with POSTAL 2. Please see the instructions page for reasons why this item might not work within POSTAL 2.
Current visibility: Hidden
This item will only be visible to you, admins, and anyone marked as a creator.
Current visibility: Friends-only
This item will only be visible in searches to you, your friends, and admins. 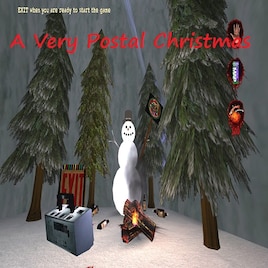 This item has been added to your Subscriptions. Some games will require you to relaunch them before the item will be downloaded.
In 1 collection by awgsknite
A Very Postal Christmas

8 items
Description
Here it is finally after the Postal devs finally fixed the upload limits !

A Very Postal Christmas (AVPC) WITH all 30 levels to play through using JUST THIS DOWNLOAD !

****ATTENTION**** If you have any other AVPC downloads you should unsubscribe from them and go to the options menu in Postal 2 and go to Purge workshop to get a rid of all AVPC files except this one because there are bugs if you have any AVPC files from the other downloads because you will have duplicate map files and they effect each other making bugs. I know this for a fact because it happened to me today. So you might want to purge the other files out unless you want those bugs. I only found transition bugs without purging workshop files

1. Install by subscribing to this download. You might have to restart Postal 2 a couple times before you get all the files. It may appear to be freezing as it downloads at the main menu but it is not.

**ATTENTION** If you ever run into a level transition bug let me know where you got it so that I can fix it. What happens is you try to go through a level transition tunnel or area to get to the next level but instead it doesn't and you lose your hud and some sounds. If this does happen to you just hit your tithe key ( ~ ) and type in quit in the console that pops up. You can then restart Postal 2 and load your last autosave which should be on the same level you got the bug. Then you just avoid that bugged area and tell me where it is so that I can fix it. Thanks

The map never worked totally in the original AVPC but it does now here on Steam ! Thanks to darth_fabar there is now a bus system, a super map and the list of errands to do on it ! Keep in mind that you will not see all errands on the list when you first start though 'cos the rest of the errands will show up later as you progress through the game !
To take bus rides stand near a bus stop bench, press enter and select your destination. Cidertown's bus stop has a wagon instead of a bench and some levels use just a school bus as a bus stop. Bus rides cost $5 so keep some cash handy ! :D

You can also download the non-Steam version of the A Very Postal Christmas v1420 mod from the bottom of my website page found here : http://unity3d.ca/?page_id=1035
Instructions on how to install the non-Steam version are also on that page.
But don't forget that the non-steam version wipes out most Postal 2 files making the normal Postal 2 unplayable ! So make a couple installs of Postal 2 if you do that ! You been warned !
Popular Discussions View All (5)

Please report the bugs you find here in this area so that i can try to fix them. Thank you
awgsknite

ooferrell Apr 30 @ 12:18am
ok so im having a map issue badly ... ive seen everyone else have the map based on the mod but i only get the default postal map and cant find my way around ... is there another map i have to download?

Cookie Mobster Feb 4 @ 10:47pm
Totally broken, can't even get the right map to show up.

awgsknite  [author] Dec 11, 2021 @ 6:42pm
Yes ! Most of it had to be remade. Believe me you just try and import AVPC into post ED yourself and find out lol. Example: I had to use ordinary characters and retexture them but the textures are from the original AVPC. That was for the gangs and lizards,etc.. Speaking of the original AVPC official updates: long ago the Oagh told me he was working on updating it also but he never gave an eta. All we can do is crossfingers and wait
< >