Greenlight > Games > Dancso's Workshop
Greenlight is being retired. For more information on how to submit games to steam, refer to this blog post.
This item has been removed from the community because it violates Steam Community & Content Guidelines. It is only visible to you. If you believe your item has been removed by mistake, please contact Steam Support.
This item is incompatible with Greenlight. Please see the instructions page for reasons why this item might not work within Greenlight.
Current visibility: Hidden
This item will only be visible to you, admins, and anyone marked as a creator.
Current visibility: Friends-only
This item will only be visible in searches to you, your friends, and admins.
System Recovery
Description Discussions3 Announcements5 Comments59 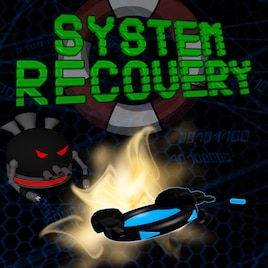 Posh Dan
Offline
See all 12 collections (some may be hidden)
Recent Announcements View All (5)
Going forward
February 26, 2017 - Dancso
Where do I begin? Maybe an awkward rhetorical question will do.
It is with great pleasure that I find myself writing an article for SR once more, despite the notable silence since my last couple of articles. (finally!) There's little I can say in defence for the lack of communication - aside from not wanting to repeat what I've already said... the main reason for lack of progress has been a total shift towards my job, where I've been working for just over a year and a half now.

System Recovery still has a notable amount of work left to be done to become a full game -- sadly it's nearly impossible for me to perform major development on two different projects at once. I'm still technically a contractor working on a seperate project, but things are looking positive enough for me to start planning ahead alongside working on the present. Speaking of which...

There is a possibility that System Recovery could get a proper published release
. It became clear to me that I would have bled dry trying to release System Recovery on my own. I don't know the first thing about building public relations, advertising or how to run a business. All I had was a dream, the patience and support of family, and a lot of free time to spend on building something that would end up being a portfolio for a game dev job application - and so it was.
But I'm not going to discard the very thing that brought me to this point, which is why I'm happy to share some great news about the game.

On multiple occasions I have discussed the possibility of taking up System Recovery together with my contractee/partner for a proper game release.
There is a definite interest going on, though it remains to be seen what we decide on when the time comes to choose our next project(s). We're currently involved with two games, both of them close to release, which means we'll find out relatively soon where System Recovery is headed in the near-ish future.

The implications of this published release would mean I would be able to provide a much more streamlined and constant workflow dedicated entirely to the game (with frequent communication), while having decent quality assurance to make sure it ends up being a great game, not to mention that with additional players, the multiplayer and steam workshop scene would become much more alive!

That's roughly as much as I can say for now - I'll let you know when some decisions have been made.

Cheers,
-Dan
Read More
An update long overdue
January 30, 2016 - Dancso
Hey everyone!
I realise it's been quite a while since my last update, sorry about that!
First, I would like to give my thanks to all of you who have been supporting System Recovery - I'd be out of a career if not for you folks! Our successful greenlight campaign has reinforced that my efforts have not been in vain - it means a lot to me!

Admittedly, there hasn't been much to talk about, so I debated whether or not it makes any sense to bring news about the lack of news. Sounds stupid right? Right. Except I'd be ruining my reputation as a developer by not showing signs of life. So here it is.

I mentioned previously that I have found myself working a part time programming job for another game. I was under the impression that the effect on System Recovery's development schedule would be moderate at best. I was sorely mistaken. It wasn't just my job -- sure, I get burned out more often than I had anticipated, but as it turned out I suddenly also had more family duties than ever before, often at the expense of time spent on my passion project. I also slack off a bit more than I should, but that's always been a factor - it is my philosophy as a game developer to focus work on occasions when I'm truly eager to get into the thick of it - or else I will have made a game without a soul. Undertale is a good recent example of a game created with love - that's the direction I've always been trying to keep System Recovery in. I've just not had a lot of push in my free time recently.

Long story short, development has been slow as of late, but I'm adamant about finishing this game and polishing it until it lives up to my standards.

So what HAVE I been doing?
A large portion of game design is to see into the heads of the players, consider a number of features, figure out what works and what doesn't -- One positive thing about my hiatus is that I've been more focused on examining other games, not necessarily of the same genre but in general, to see where and how exactly do they flourish, which aspects encourage the player to spend more time and which ones drive them away in frustration. ...you could say I've been spending most of my creative time taking notes.

Having played my own game a couple of times in the last few weeks, comparing it to other games I play, I see a lot of flaws that I want to correct, features to improve upon... a lot of work to be done. As it stands I don't get many consecutive hours to work on SR, and it has limited my input down to the odd hour-long session of tweaking a feature, writing a story for new missions, trying new ideas, designing the basics of the upcoming level editor, but it's not enough to get me through to the finish line... I have started working on multiple things in parallel (BAD idea) and neither of them are patch-worthy yet, hence the lack of releases.

I look forward to bringing you some good news soon, hopefully. It might be some time after things have cooled down a little with the other game I'm developing, as we are strongly pushing towards its release at the moment.

As always, I'm open to your comments, thoughts, concerns!

-Dan
Read More
Description
Show those viruses who's boss!
System Recovery gives you the chance to fight back

Infected computers are for people who don't have Virus Exterminating Drones.
Get your share of malware-busting action in this top-down view arcade shooter!

DEMO / Purchase on Itch.io
The BETA is available on Itch.io through a free DEMO or paid version to support the developer:
http://takkatakka.itch.io/system-recovery

Purchases made on Itch.io will be eligible for a steam key when / if the game gets on Steam.
Alternatively you can also get the demo from IndieDB:
http://www.indiedb.com/games/system-recovery

Dancso  [author] Nov 6, 2016 @ 2:20pm
I have been intending to write a new article for a while now but haven't gotten around to it, sorry. There are some good and bad news:
The bad is that I've been so focused with work I, haven't made any progress with the game in recent months.
The good is that I've recieved a publishing offer that would allow me to develop it as part of my job, resulting in a much more stable development cycle sometime in the future. The deal is not finalized yet and it may be a while still, unfortunately.

Dancso  [author] Dec 7, 2015 @ 4:10am
@MakoSipper Admittedly, things have been a bit slow ever since I got employed in July as a programmer for another game. It takes up more of my "creative energy" than I thought it would, and I mostly only have the weekends to work on System Recovery... whenever family doesn't take precedence.
I know it sounds bad and I hope people won't judge me too harshly for prioritizing an actual paying job over my passion project.
I will say though, that progress is still being made on this game, just much more slowly.

The steam release will have to wait until somewhere in 2016 (hopefully not too far in) because I don't want to do a half-assed early access release on here. In the mean time, a couple of content updates are to be expected every now and then.