Greenlight > Games > Mad Bo's Workshop
Greenlight is being retired. For more information on how to submit games to steam, refer to this blog post.
This item has been removed from the community because it violates Steam Community & Content Guidelines. It is only visible to you. If you believe your item has been removed by mistake, please contact Steam Support.
This item is incompatible with Greenlight. Please see the instructions page for reasons why this item might not work within Greenlight.
Current visibility: Hidden
This item will only be visible to you, admins, and anyone marked as a creator.
Current visibility: Friends-only
This item will only be visible in searches to you, your friends, and admins.
Edengrad: POSTAPO MMORPG
Description Discussions11 Announcements1 Comments339 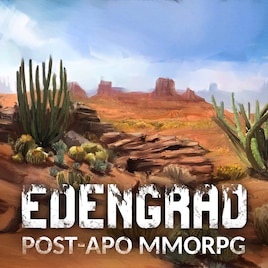 Mad Bo
Offline
See all 23 collections (some may be hidden)

Read More
Description
Release date: 2015
GAME DESCRIPTION
Edengrad is a post-apo reality simulator. In it, the player becomes a descendant of people who survived Earth's destruction. The game's main goal is to survive. Edengrad has been in production since 2012.

Edengrad is a survival MMORPG game rooted in post-apo culture and drawing on the best features of such classics as Fallout or Mad Max.

Your everyday responsibilities will include collecting firewood, building shelters, hunting small game1, and hydrating your body. This stage concludes when you find your fellow travelers and together form an organization.

As the saying goes: “the more the merrier” - so players will be able to create a micro-community within which they will enjoy more benefits than solitary players. For example, they may establish a settlement - serving as a base camp, a trade center, or a fortification for a strategic object on the map.


The game takes place in a world contaminated after many years of global wars. Only a small fraction of society managed to survived the turmoil, but due to heavy pollution they have to face a difficult dilemma: either to emigrate to another planet in search of a better tomorrow, or to stay on Earth and live in huge underground vaults.

After many years, the government came up with a plan whose aim was to regenerate the environment on Earth's surface by using a special type of machines known as “Hydra”-class nature generator. Although the plan succeeded only partially, it nevertheless facilitated re-settling of significant areas on Earth.

In the game, you control a character who is a great-grandchild of the first residents of one of the vaults, and who, as a mercenary, receives a number of missions to accomplish on the surface of the recently regenerated planet.

The first stages of the game require the player merely to survive, build a shelter, hunt some animals, and find fellow travelers. Only later will they be able to erect their own houses or even entire villages, as well as interact with other players from around the world.

The player has at his or her disposal a variety of developable skills, such as carpentry, woodcutting, engineering, farming and the like. The player may engage in trade or the import of otherwise unavailable goods from one region to another. Fighting will be a substantial, but not a crucial element of the game-play.

A list of skill diagrams, each containing several other skills available to be unlocked:

Edengrad is distinguished by a multitude of options. We want to let the player decide on how to proceed. Those fond of exploration may rummage through the ruins of old cities, while those who prefer fighting may come across hordes of enemies to kill; fans of good storytelling may immerse themselves in the game's plot, and those inclined to construct may devote virtually all their time to creating cities.

Naturally, if you want, you may play and do all of those things.

The game gives you considerable freedom in personalizing your character. You may choose from among an assortment of face features, like noses, lips, or ears, but also from among types of hair and beards, as well as clothing. As for the latter, you can either find clothes or craft them. Every player will be able to handpick separate pieces of clothing, which will make each character look unique.

Since the world of Edengrad is set after 2044, it contains materials unknown to us yet at present.

The game will also introduce a huge number of enemies - from harmless herbivorous animals, to dangerous predators, to really challenging mutants.
Popular Discussions View All (11)

Gestapo Oct 13, 2015 @ 7:05am
Hi, I'm one of the Russian tested various games is also a channel on Youtube If you give me the key to the Alpha test will be very grateful!

Edengrad: POSTAPO MMORPG has been Greenlit and is now listed in the Steam store. For the latest information, purchase options, and discussions for Edengrad: POSTAPO MMORPG, please see it on the Steam Store or in the Steam Community.
Visit Store Page
For more details Visit Community Hub
For latest discussions
If you really, really want to, you can continue to the Greenlight page. Information on this page may be out of date, since all the action has moved to the areas noted above.