Greenlight > Games > hotairraccoon's Workshop
Greenlight is being retired. For more information on how to submit games to steam, refer to this blog post.
This item has been removed from the community because it violates Steam Community & Content Guidelines. It is only visible to you. If you believe your item has been removed by mistake, please contact Steam Support.
This item is incompatible with Greenlight. Please see the instructions page for reasons why this item might not work within Greenlight.
Current visibility: Hidden
This item will only be visible to you, admins, and anyone marked as a creator.
Current visibility: Friends-only
This item will only be visible in searches to you, your friends, and admins.
Super Endless Migration
Description Discussions1 Announcements2 Comments58 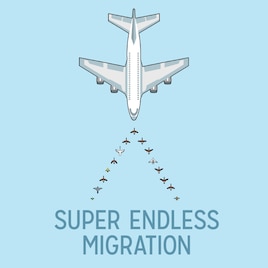 hotairraccoon
Offline
See all 3 collections (some may be hidden)
Recent Announcements View All (2)
The Roadmap to Release
September 14, 2015 - hotairraccoon

A lot of you have mentioned that you played the original game / prototype for Endless Migration on flash, so we thought we'd take a moment to explain the genesis of this latest project and how it fits into the context of our past work, as well as what will be new in the "Super" sequel.

Our Timeline
2009 - Endless Migration minigame released
EM was our first real game, which we released in 2009. Jon created the flocking mechanic as part of his graduate work and then turned it into a fun minigame for Kongregate's Longest Lasting Game Contest. Endless Migration won the $10,000 Grand Prize (and a year supply of Stride gum!) which proved to us that this concept was worth exploring further.

2012 - Endless Migration Kickstarter
A few years later, we decided to run a campaign on Kickstarter to fund the creation of a full game based on the original flash prototype. Our campaign was a success and we were honored to have so much support. We started slowly but surely to create a full-scale sequel using Unity, that we will release on Steam for PC, Mac, and Linux, mobile devices (iOS and Android), and possibly even consoles through Xbox Live and PSN.

Present day 2015
We launched our Steam Greenlight campaign a few days ago at Boston Festival of Indie Games. Steam is the first platform we'd like to launch on, because we love the platform and the community. We need your help to make this dream a reality. Once greenlit, we have a stable build that we will release on Steam Early Access. We can't wait to have some dedicated gamers test our beta and help us make the game incredible.

New Features
Super Endless Migration uses the same concept as the original flash minigame - a flock of wayward birds who must survive an onslaught of aerial obstacles and challenges - but takes it to a new level. Super Endless Migration will have many new features and improvements from the prequel, including:
- Multiple Levels that span thousands of years of history, tied together by a seamless time-traveling wormhole system we've built.
- Dozens of bird species with unique abilities, including rare birds and unlockables.
- New types of threats, such as tracking drones, alien ships, collapsing cave systems, forest fires, crop dusters, mythical adversaries, and more!
- A re-imagined upgrade system and three key abilities: boost, song, and dodge
- A full indie soundtrack
- Alternate pathways through levels and secrets to be found
- An immersive visual narrative
- Story Mode and Endless Mode
- and more...

Essentially, the flash game was a proof-of-concept that showed the mechanic of flocking could be fun. Super Endless Migration will leverage the excitement of this mechanic to build a much broader, full-length, and immersive game. We think you'll play for hours, not minutes when you see all of the new and incredible features Super Endless Migration has to offer.
Read More
BFIG Digital Showcase
September 12, 2015 - hotairraccoon

Today is the first day of our Greenlight campaign and we are thrilled that so many of you have voted yes to our game. We kicked the greenlight off about 6 or 7 hours ago off from our booth at the Boston Festival of Indie Games Digital Showcase. We've also been getting lots of feedback from gamers who are playing the latest demo! Thanks for the support and please share with friends if you'd like to see this game on Steam.

Beginning above the crowded airspace of a modern metropolis, players guide the wayward flock through a relentless maelstrom of obstacles gathering all manner of friendly birds, until suddenly the flock is caught in a wormhole and hurdled through time. Players must overcome many dangers, traveling through history, prehistory, and even the distant future, in seven unique levels spanning thousands of years of history, mythology, and fantasy. Hunted by desperate predators, tracked by futuristic drones, threatened by crashing meteors, caught in the midst of aerial combat, and even left at the mercy of ancient gods and titans, the flock must constantly adapt to new and unexpected challenges, or be lost forever.

A solemn ode to aerial classics like Galaga or Space Invaders, Super Endless Migration is an arcade game at its heart, albeit an unconventional one.

The complete absence of weapons in the game — at least weapons that can be used by the player — creates a unique sense of danger and thrill, while flirting with the urge to press on in the face of the insurmountable. Super Endless Migration is a roguelike adventure with high stakes and little forgiveness. There are no extra lives, but there is a modest strength in numbers. As long as a single bird still flies, all is not lost.
Popular Discussions View All (1)

Angus Prune Sep 28, 2016 @ 3:01pm
Hot Air Raccoon have had $35 of my money for this game for 4 years. There has been no communication and there still is no communication.

If they communicated with their backers, we'd be understanding. Even if the project was put on hiatus or cancelled. I backed the game because I loved the original and wanted to support the devs. Even if nothing came of it, I'd have been happy to think of it as a donation for the joy I got from first game.

I've prodded the devs politely over the years. I've been supportive. I pushed the greenlight. I even contacted journalists about it. That was already after 3 years of no communication.

Regnes Aug 31, 2016 @ 1:15pm
The game was supposed to come out four years ago, not sure what they're doing exactly. We're moving into Duke Nukem Forever territory here now.

Great Hero J Jan 3, 2016 @ 4:10pm
I've played the original Endless Migration, and I have been looking forward to this for years! Voted yes