Store Page
Total War: ATTILA >  Workshop > Stuie's Workshop
This item has been removed from the community because it violates Steam Community & Content Guidelines. It is only visible to you. If you believe your item has been removed by mistake, please contact Steam Support.
This item is incompatible with Total War: ATTILA. Please see the instructions page for reasons why this item might not work within Total War: ATTILA.
Current visibility: Hidden
This item will only be visible to you, admins, and anyone marked as a creator.
Current visibility: Friends-only
This item will only be visible in searches to you, your friends, and admins. 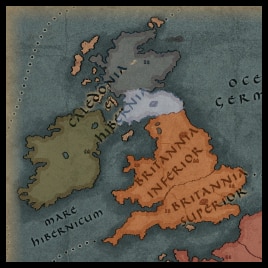 Stuie
Online
See all 49 collections (some may be hidden)

This item has been added to your Subscriptions. Some games will require you to relaunch them before the item will be downloaded.
Description
This is a "no DLC" version of my Roman Britain mod.
The full version can be found here: http://steamcommunity.com/sharedfiles/filedetails/?id=453101121

This mod provides the opportunity to play as Roman Britain. Rome has stripped the province of most of its legions, leaving the people of Roman Britain to fend for themselves.

NOTE: This mod will not work with other startpos.esf mods including additional faction mods and TPY mods.

v0.6 Release
1. Rebuilt Roman Britain without using WRE (or any other faction) as the base.
2. Implemented faction specific Chapters.

The majority of the work has been focused on making the faction work independent of using the WRE as the base. This means that all other base game factions are playable without issue (particularly the WRE).

NOTE that this release will break save games from releases prior to v0.6.

v0.4
Changes are specific to Roman Britain unless otherwise noted:
1. Made WRE playable. (done)
- There is a known issue with the faction missions. This is to be addressed in v0.5
2. Created a no-DLC version (without Celtic units)
3. Updated Britannic Rebels icons. (done)

v0.3
All changes are specific to Roman Britain:
1. Minor Victory conditions have been modified for Roman Britain.
2. WRE Intro movie and adviser speech have been removed.
3. Initial troop strengths have been bolstered by 50% (all now start at about 75% strength).
4. Family Tree. Changed Perennis to Flavius Claudius Constantinus (even though this is slightly prior to his rise to power) and gave Constantinus appropriate children.
5. Changed faction icons for both Roman Britain, WRE and Britannia.

JBMOfficial Mar 7 @ 12:20pm
Stuie.
This is one of my Favourite Mods on the entire game. I know you previously said that you will not be updating this mod, but if you ever did go back to it an 8TPY or 12 TPY version would be perfection.

Shadow(AUT) Nov 21, 2021 @ 10:15am
Is there a possibility to get the 0.5V release to download somewhere or as another workshop entry?
I am using the Imperium Praetoria Unit Pack and it adds the "old school" roman units to ERE/WRE but now of course not to roman britain anymore :(
But ty for the mod anyways! Had lots of fun with it :))

lyons3612 Jul 16, 2021 @ 1:24pm
I enjoy the mod, but the romano british would have had armoured horse archers in this period. historical sources support this and it would be great to see them in the mod, the ere ones would be great.

Stuie  [author] May 29, 2021 @ 9:51am
NOTE: unless CA updates TW: Attila for some odd reason, I will no longer provide updates for this version of the mod. Any further work will be restricted to the DLC version.

Stuie  [author] May 27, 2021 @ 8:10am
Updated to provide Roman Britain as its own faction (rather then repurposing the WRE as was done previously).