Greenlight > Games > gqul's Workshop
Greenlight is being retired. For more information on how to submit games to steam, refer to this blog post.
This item has been removed from the community because it violates Steam Community & Content Guidelines. It is only visible to you. If you believe your item has been removed by mistake, please contact Steam Support.
This item is incompatible with Greenlight. Please see the instructions page for reasons why this item might not work within Greenlight.
Current visibility: Hidden
This item will only be visible to you, admins, and anyone marked as a creator.
Current visibility: Friends-only
This item will only be visible in searches to you, your friends, and admins.
Sethian
Description Discussions1 Comments58 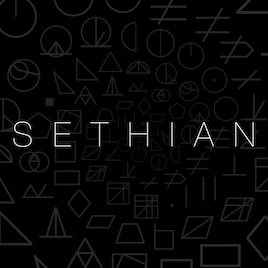 gqul
Offline
See all 3 collections (some may be hidden)
Kickstarter

View Sethian in the store

Store page
Description
In Sethian, you play as an archaeologist from thousands of years in the future, exploring a distant colony, which has been abandoned for centuries. In the ruins, you discover a functional computer, which operates in the native language. The core gameplay of Sethian consists in deciphering and studying this language, and using it to communicate with the computer, to find out what happened to the colony.

If anything, Sethian is a puzzle game, where the puzzles involve interpreting and utilizing the game's language in order to uncover the mysteries of the planet. But Sethian is not a game of decryption--the game uses its own language, unrelated to English, which must be translated by the player.

For the answer to every question you could possibly have, as well as plenty of gameplay footage, please see our Kickstarter:

alexbradley Jun 16, 2015 @ 11:38am
As an amateur linguist who has been inspired by Tolkien and the creators of Klingon and Dothraki, and has dabbled in creating languages myself, I am incredibly excited about a game that immerses you in an exotic world through language. I funded the Kickstarter and will play this as soon as I can!

Skoardy Jun 11, 2015 @ 5:34pm
Greenlight submissions are required to include at least four screenshots. Some people prefer not to have to sit through videos just to see the game in question and others have had trouble getting videos to play in Steam so it's always a good idea to also include screenshots if you can.

gqul  [author] Jun 11, 2015 @ 5:12pm
I understand if you're not familiar with the game it seems like I haven't bothered to show you much, but honestly the game really doesn't deviate much at all from the core gameplay. As such, there's not much more I can show you with screenshots. That's why I didn't bother to include them. Anyway, in-game footage is much more revealing, isn't it?

Skoardy Jun 11, 2015 @ 1:13pm
If you couldn't be bothered to follow the submission rules and include any screenshots, it's probably not worth checking anything else you've posted out.

Blake Linton Jun 11, 2015 @ 12:56am
Watching the gameplay videos rekindles in me the wonderfully eerie feeling of mystery and discovery that I had playing Myst and Starcross long ago. I think this will be a game that sets the mind on fire.
< >

Sethian has been Greenlit and is now listed in the Steam store. For the latest information, purchase options, and discussions for Sethian, please see it on the Steam Store or in the Steam Community.
Visit Store Page
For more details Visit Community Hub
For latest discussions
If you really, really want to, you can continue to the Greenlight page. Information on this page may be out of date, since all the action has moved to the areas noted above.