Store Page
Team Fortress 2>  Workshop > UEAKCrash's Workshop
This item has been removed from the community because it violates Steam Community & Content Guidelines. It is only visible to you. If you believe your item has been removed by mistake, please contact Steam Support.
This item is incompatible with Team Fortress 2. Please see the instructions page for reasons why this item might not work within Team Fortress 2.
Current visibility: Hidden
This item will only be visible to you, admins, and anyone marked as a creator.
Current visibility: Friends-only
This item will only be visible in searches to you, your friends, and admins. 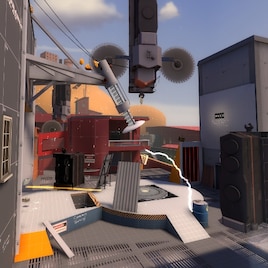 This item has been added to your Subscriptions. Some games will require you to relaunch them before the item will be downloaded.
In 1 collection by UEAKCrash
Crash-Maps

16 items
Description
A mysterious suicidal cult to an entity known only as "Train God" has been discovered in an abandoned industrial hazardous materials compound. We're not sure what they were doing or why they were doing it, but we do know that we want whatever it is that they have. The dirty hippies have been driven from their homeland and into the desert where they belong. The only thing left to do is decide which team gets to claim the weird hazardous facility as their own.

Red and Blu have taken part of the compound as their own and it's up to you to stumble your way through the literal death trap of a work environment and capture that point! The hippies were kind of encouraging the last part, but never mind that. Sign this release form...

y are there no more servers
Wings4505

Why are the servers so bland
Name the Profession
< >
206 Comments

Htroxdogface Feb 7 @ 2:32am
Oh trust me, it does work, but it seems that you don't have the option "enable dev console" properly, you know, enabled, in your options. Should be a box on the 'keyboard' tab that says "advanced" and the rest should be self-explanatory.

Htroxdogface Feb 1 @ 11:52pm
To help those in the comments in the future, to play on the map, simply copy and paste "map workshop/454147823" into the console and it should work