Store Page
Space Engineers>  Workshop > CJay's Workshop
This item has been removed from the community because it violates Steam Community & Content Guidelines. It is only visible to you. If you believe your item has been removed by mistake, please contact Steam Support.
This item is incompatible with Space Engineers. Please see the instructions page for reasons why this item might not work within Space Engineers.
Current visibility: Hidden
This item will only be visible to you, admins, and anyone marked as a creator.
Current visibility: Friends-only
This item will only be visible in searches to you, your friends, and admins. 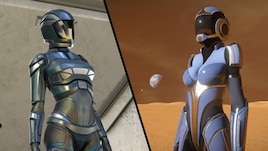 This item has been added to your Subscriptions. Some games will require you to relaunch them before the item will be downloaded.
Description
I won't make a male version, sorry!

My first completely custom character! This started out about 6 months ago as a Mass Effect inspired model practice. After Keen updated the Animation system, I started porting it to SE.

2018 Update: I threw in a new model that's been collecting dust on my HDD for 2 years. It's called Promethium.

This work is licensed under a Creative Commons Attribution-NoDerivatives 4.0 International License.
Popular Discussions View All (7)

Can't change model away from these
Vl4dim1r
< >
892 Comments

because the realistic space suit was too much.

Zajian Jan 10 @ 8:47pm
Any chance for this to be updated or does it work on current build?

Evelyn of Theia Oct 16, 2021 @ 2:06pm
I remember using this mod waaaaaaaaaaaaaaaaay back and getting told off about using it.
"So damn unrealistic."

Lol anyway, good to see it back in working order to whatever degree.
Probably never use it again in my life since we have a default female model now that matches the male one.

If there's a male model made, I'll consider using it again... Probably won't. You did a good job though.

kenshi enjoyer Aug 12, 2021 @ 4:22am
Animations and interactions are extremely broken to the point i cant even drill downwards