Greenlight > Games > Grubby_Monster's Workshop
Greenlight is being retired. For more information on how to submit games to steam, refer to this blog post.
This item has been removed from the community because it violates Steam Community & Content Guidelines. It is only visible to you. If you believe your item has been removed by mistake, please contact Steam Support.
This item is incompatible with Greenlight. Please see the instructions page for reasons why this item might not work within Greenlight.
Current visibility: Hidden
This item will only be visible to you, admins, and anyone marked as a creator.
Current visibility: Friends-only
This item will only be visible in searches to you, your friends, and admins.
Evolution
Description Discussions0 Announcements4 Comments68 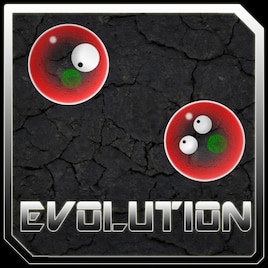 Grubby_Monster
Online
See all 10 collections (some may be hidden)

View Evolution in the store

i will be looking for beta testers soon. If you are interested please post on the evolution forum here:

I may limit the number of beta testers at some point so it's on a first come first serve basis.

The longer you run the simulation the better. Since the results get shared between instances the creatures you evolve will really help me to fine tune the environment variables. Thanks!!!

Read More
Description
Evolution is a real time simulation of the evolutionary process. Creatures have DNA that defines their structure, traits, how they see the world around them, and how they react to it. Each creature is unique, most die quickly, some die a little slower, and others survive (some just like rocks, they usually die too). It is the survivors that reproduce and mutate, just a little, but enough to adapt to their environment. Early creatures are pretty basic but they have the capacity for some pretty elaborate behaviors and, to be honest, I am not sure how interesting this could get.

Tide Pool is my starting level, this is where you evolve your creatures. This world is stacked in your favor to help you select and breed the creatures you deem fit to live. At first you control a small handful of creatures and help them find food, focus on those that move independently, or just let them figure it out. You compete against creatures that evolved in other tide pools from other players so it is never the same game twice. If you do manage to take over the environment all your creatures level up and you start over competing against the next level of enemy creatures.

Future versions will include a laboratory to cross breed creatures with other creatures, manage, save and share your creatures, and apply targeted mutations. I have plans for a battle arena to pit creatures against each other. I am also considering a maze level where walls can be set to damage them and, since they can detect walls, they should evolve to live happily in a dangerous maze world. I am also considering a micro ship that you can command to battle the creatures directly. Lastly, a level called Primordial Soup, would just be a place to create new creatures. This may evolve to be the only place new creatures get created but I am really still at the ‘waiting for feedback phase’.

Thanks for checking this out!


How Much is it going to cost? The base game (tidepool) should be a nominal cost .99 - 1.99 and the full game might be a bit more. I am really more interested in sharing the game than making money
< >
68 Comments

danalyze Jul 18, 2015 @ 9:19am
Awesome game!Voted and bought it through Groupees's Build a Greenlight Bundle 27.Best wishes!

The longer you run the simulation the better. Since the results get shared between instances the creatures you evolve will really help me to fine tune the environment variables. Thanks!!!

DreamReaver Jul 12, 2015 @ 8:12am
Sounds cool and like a very old game played many years ago which i think was called evolution and was on the mac.

FoxFire Jul 10, 2015 @ 10:06pm
Looks VERY cool. But I have to say, I'd vote for it for the name alone. Anything that pisses off fundamentalist Christians and/or creationists gets a thumbs up in my book!

Evolution has been Greenlit and is now listed in the Steam store. For the latest information, purchase options, and discussions for Evolution, please see it on the Steam Store or in the Steam Community.
Visit Store Page
For more details Visit Community Hub
For latest discussions
If you really, really want to, you can continue to the Greenlight page. Information on this page may be out of date, since all the action has moved to the areas noted above.