Greenlight > Games > phuongv's Workshop
Greenlight is being retired. For more information on how to submit games to steam, refer to this blog post.
This item has been removed from the community because it violates Steam Community & Content Guidelines. It is only visible to you. If you believe your item has been removed by mistake, please contact Steam Support.
This item is incompatible with Greenlight. Please see the instructions page for reasons why this item might not work within Greenlight.
Current visibility: Hidden
This item will only be visible to you, admins, and anyone marked as a creator.
Current visibility: Friends-only
This item will only be visible in searches to you, your friends, and admins.
ToyQuest
Description Discussions6 Announcements3 Comments669 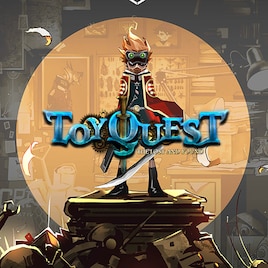 phuongv
Offline
See all 50 collections (some may be hidden)

View ToyQuest in the store

Store page
Recent Announcements View All (3)
"This game has been Greenlit by the Community!"
June 4, 2015 - phuongv

It makes us proud to see this sentence on top of our greenlight page.
We'd like to thank you all for your support: everyone who voted for the game and everyone who gave a feedback.
It was not possible without you.

We're still hard at work polishing the game and getting ready for release. Please visit hikergames.com for constant update!

Thanks for the wonderful support, Voters!
Our campaign is looking really good so far and it is clear that MANY of you guys want this game on Steam!
Because of you, we've hit the top 10 list of Greenlight games in just 24 hours!

Every vote counts and we need more YES votes to bring this game to Steam so tell your friends to lend a vote. Many thanks!

Read More
Description
Release date: 2015
ToyQuest is a Metroidvania style action-platformer that takes you back to a world made from the nightmares of your childhood.

Join Brand—an action figure that has come to life—in his fight against the darkness to save his owner, Felix.
Nightmares are only the beginning of Brand's troubles. He must uncover the secrets of the house before it's too late!

Explore the entire house, combat chaos, and save other toys in the battle against evil. Amass a huge arsenal and upgrade any item you find. Build the ultimate bedroom fortress to keep the darkness at bay and unravel the house's mysterious past!

Features:
ToyQuest honors the experience of games from the ‘80s and ‘90s, without the 8-bit graphics and sound. We’ve combined platformer gameplay mechanics with a modern aesthetic that is still faithful to a "retro" look and feel. All the elements (characters, creatures, environments, objects, and music) come together to create a vivid picture reminiscent of the games many of us grew up playing.


ToyQuest is being developed for PC and Mac and is set to launch in 2015.

ToyQuest has been Greenlit and is now listed in the Steam store. For the latest information, purchase options, and discussions for ToyQuest, please see it on the Steam Store or in the Steam Community.
Visit Store Page
For more details Visit Community Hub
For latest discussions
If you really, really want to, you can continue to the Greenlight page. Information on this page may be out of date, since all the action has moved to the areas noted above.