Greenlight > Games > Next Dimension Game Adventures's Workshop
Greenlight is being retired. For more information on how to submit games to steam, refer to this blog post.
This item has been removed from the community because it violates Steam Community & Content Guidelines. It is only visible to you. If you believe your item has been removed by mistake, please contact Steam Support.
This item is incompatible with Greenlight. Please see the instructions page for reasons why this item might not work within Greenlight.
Current visibility: Hidden
This item will only be visible to you, admins, and anyone marked as a creator.
Current visibility: Friends-only
This item will only be visible in searches to you, your friends, and admins.
I, Viking
Description Discussions7 Announcements1 Comments274 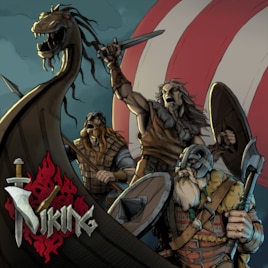 We are excited to show you the I, Viking official trailer!

Read More
Description
Release date: Q2 2017
Last autumn we entered Greenlight with our title I, Gladiator {LINK REMOVED}(http://bit.ly/1CdiUo1) and were greenlit within 17 days.
Nowadays I, Gladiator is already released and we are extremely excited to announce our new game I, Viking, a new part of our fighting franchise, the ideological successor of I, Gladiator.

What is I, Viking about?

You and your squad of Vikings come on your drakkar to the unknown land to mount a piratical raid! But the raid appears to be a sorting out your relationship with a hostile Viking clan and fighting for the plundered riches.
Now your aim is not only to raid but to defeat you enemies and burn their longship.
The multiplayer mode features two teams of 6 heroes fighting against each other, each hero with different abilities and tactical advantages over others.
Be extremely careful when selecting your Vikings - a fearless and skilled swordsman, a vigorous but slow axeman of overwhelming force, an experienced and deadshot spearman, the alert but vulnerable spearman or - maybe a berserker? - for his pure adrenaline-powered attacks.

More additional other types of warriors with unique characteristics are also available, you can hire them for services for lavish remuneration.

Different move sets and unique combo styles of your Vikings provide your special attacks and combos, striking back and dodging enemy attacks, counterattacks and non-blocking hits, magic spells and spectacular finishing up hits.

Not only direct confrontation can bring your squad to victory. Strike and move on in the location, find and bring a torch to burn the enemy longship - any method of fighting is available to you. You may appear to come not to struggle but to find different kinds of rare treasures, hidden from eyes in local sceneries. And even if not each building has a rare metal or sacral rune - everyone will get what he strives for!

Returning from a battle to your village, look in the Great Hall to find new Vikings, who are ready to join your squad. You can visit the shaman to show him new potions and found runes, he will whisper you new spells that help you to win in your future battles. And remind to visit the smithy. The local blacksmith has already forged a special blade. And now it's definitely high time - a new raid is waiting for you!

therecanOLIbe1 Jan 13, 2017 @ 9:11pm
"Up onto the overturned keel, clamber with a heart of steel! Cold is the ocean spray, and your death is on its way! With maidens you've had your way, every man must die some day!"

The wait is driving me BERSERK!

Next Dimension Game Adventures  [author] Jan 12, 2017 @ 5:29am
Hi everyone! Thank you for your patience!
The game is currently in beta and released on iOS. As soon as we make the game run smoothly and add all the functionality - it will be released on Android and Steam