Store Page
Arma 3>  Workshop > TheEvanCat's Workshop
This item has been removed from the community because it violates Steam Community & Content Guidelines. It is only visible to you. If you believe your item has been removed by mistake, please contact Steam Support.
This item is incompatible with Arma 3. Please see the instructions page for reasons why this item might not work within Arma 3.
Current visibility: Hidden
This item will only be visible to you, admins, and anyone marked as a creator.
Current visibility: Friends-only
This item will only be visible in searches to you, your friends, and admins. 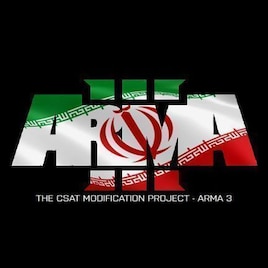 TheEvanCat
Offline
See all 998 collections (some may be hidden)
You need DLC to use this item.

This item has been added to your Subscriptions. Some games will require you to relaunch them before the item will be downloaded.
Description
THE CSAT MODIFICATION PROJECT V1.8.5
- THE COMPLETE EDITION -
For the (newly updated and improved) replacement patch (requires this addon, The CSAT Modification Project) check out this link:

For mod compatibility files, also check out these addons:

The development Twitter is the best source of news and WIP info: @TEC_CSAT

For the official Discord group, check out Arma 3 Hub on Discord: Arma 3 Hub[discord.gg]

The Western world has been at the great powers of the planet for the last few hundred years. The colonial empires of Europe ruled the world and extended their fingers to the farthest reaches of Africa and Asia. They were the giants and they were unstoppable. Even as the West fought and destroyed itself on the battlefields of the First and Second World Wars, someone would still be there to preserve their glory. For a time, that was the United States. As Europe squabbled amongst itself in the latter half of the 20th century, America reigned supreme. Yet unipolarity does not last forever. New challengers would rise to threaten the dominance of Western states. The once-mighty empire of Persia had been relegated to obsolescence and foreign control for almost a century - something that the people did not take kindly to. In 1979, the people of Shahist Iran revolted to create the Islamic state in response to a perceived "Westoxification" of culture and government. Often at odds with the West, this new nation would quietly become resurgent in the 21st century.

When the 2008 economic crisis hit, Iran was weakened as well. Yet as the years went on something could be felt changing. The country opened up and sanctions were lifted, allowing economic recovery. The West could be seen struggling. China rose to match the stagnated United States. The two countries became superpowers in a new conflict mirroring the Cold War of old. Iran, too, prospered under China's wing. Their newly moderate-leaning government, born from reformist movements, powered their new ambitions. They sent men into space where the United States and Europe had left it cold and barren. They sent more and more soldiers abroad to conflict zones to establish their presence as a peacekeeping force and ingratiate themselves with nearby governments. The novel phenomenon of a Persian state policing the Arabs instead of a Western one became increasingly prevalent as the years went on. During this time, China and Iran began to grow closer together. They formed CSAT - the Canton Protocol Security Alliance Treaty - as a counterweight to America's NATO and Russia's CTSO. Nations began to flock to CSAT for support, including such countries as Iraq and Azerbaijan. In the early 2030s when Turkey was hit by a massive earthquake, CSAT troops intervened to provide stability and security. Turkey left NATO for CSAT shortly thereafter - a shockingly unexpected upheaval in the geopolitical realm.

It is here where CSAT wishes to expand its influence westward to challenge NATO. An east wind blows upon the Balkans, upon bankrupt Greece, and upon the tiny island-nation of Altis. They, too, struggle with economic crises and military insurgencies. They had reached out to CSAT for support in these trying times, and CSAT was more than happy to oblige. Now they are involved in the crisis there, a flashpoint that threatens to throw the world into war again and forever change the balance of power between the dying West and the nascent East. A change is on the horizon: it is to be determined on the battlefields of Altis.

The CSAT Modification Project is something that I've been working on to create a more conventional aesthetic feel for the OPFOR faction in Arma 3: something that many people weren't too pleased with. This includes changing elements that seemed to be outlandish and out-of-place for the rest of the game like the Protector Helmets and the CSAT Fatigues. As time went on, this morphed into an inclusion of assets that were left out of the faction (like rocket artillery and naval fighter planes) and various other side projects. The assets included in this pack are designed to provide the familiar feel that people want, but still stay faithful to the BIS setting to allow for an appropriate enemy for the setting's BLUFOR to fight. This also facilitates replacement packs for campaigns and missions involving CSAT on 2035 NATO, keeping it generally close to the lore and gameplay design for the faction. Work continues to improve the quality and professional appearance of the mod to produce a product with great care and attention to detail.

With the update to 1.7.0 and beyond, I have worked for a few months to completely overhaul the appearance and aesthetic of CSAT gear. CSAT soldiers are now varied, and equipped with a diverse array of equipment and accessories. The color scheme of these units has been edited to be more like default Iranian troops (with browns and black highlighting) for better tactical operating. This makes the faction feel alive and realistic, more than a collection of targets for missions. Eventually, CSAT units will have their own individual distinctions and classifications that gives depth to missions and the world around them. Projects (like LM's Pacific CSAT mod) exist to take this concept around the world to other members of the faction like China, North Korea, and potentially Arabic states (Iraq, Syria, etc.) and African countries seen in the lore. I have worked on this project for a few years now, and still plan more support as the future brings new things for Arma 3.

Thanks for all of your support!
Popular Discussions View All (4)

Slug Sep 2 @ 6:04pm
It would be ncie to add belarus and maybe eventually other countries as well

Shadowleggy Jul 20 @ 12:19pm
Why on earth would you replace the unique Viper Helmet/facemask with the CTRG one?

ARMY | US | RCT A.Pulaski May 8 @ 2:09pm
@Nils
You can still use the items , only thing is, u get a notification that u can purchase the DLC if u use it on urself, after a little while it will show the logos of the Dlc on ur screen
< >