Greenlight > Games > Sgt.H's Workshop
Greenlight is being retired. For more information on how to submit games to steam, refer to this blog post.
This item has been removed from the community because it violates Steam Community & Content Guidelines. It is only visible to you. If you believe your item has been removed by mistake, please contact Steam Support.
This item is incompatible with Greenlight. Please see the instructions page for reasons why this item might not work within Greenlight.
Current visibility: Hidden
This item will only be visible to you, admins, and anyone marked as a creator.
Current visibility: Friends-only
This item will only be visible in searches to you, your friends, and admins.
Empires in Ruins
Description Discussions1 Announcements10 Comments48 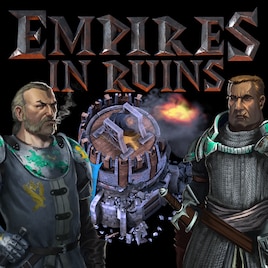 Sgt.H
Offline
See all 7 collections (some may be hidden)

View Empires in Ruins in the store

the wonderful fellas from Explorminate.net offered us a chance of talking at length about Empires in Ruins, its settings, its mechanics, etc.

How could we forego that chance?

our long silences don't mean inactivity, quite the opposite instead!

Our work continues on all the aspects of the game, and we're about to get the finalized new terrains finally in game.

Take a look at the new video we uploaded with a full battle run in a 14-waves map. Althought the video was recorded by mistake at 30 fps, it shows a full battle at the current game state. Feedback and comments are always welcome so that we can keep on using your ideas and critiques to improve!

You expand, strengthen and defend on a turn based strategy map. You will have 26 regions to tame and improve to increase production and military prowess while following a twisted plot that explores the lower aspects of human beings.
Fight then your battles in tower defense fashion with an advanced engine that edges on RTS for several features, while still not losing its original TD nature.

You are Hans Heimer, the grumpiest, unruliest Sergeant of the Koth Army, sent on a punishment assignment: taming the rebellion that is raising in the Western Marches of the Principality of Koth. But as everything in the world of Empires in Ruins, every stinky rotting horse crap is covered by a plating of fake gold. If Sgt. Heimer thought that the mission was awful, it is only because he didn't see the rest of it yet.

Is it gonna be more than what the grumpy Heimer can chew or did someone just screw with the wrong Sergeant?
Popular Discussions View All (1)

We need your feedback to improve
Sgt.H
< >
48 Comments

Sgt.H  [author] Dec 8, 2019 @ 1:10am
Time passes, and release approaches, and we never gave up on finishing EiR! You can check the full store page http://store.steampowered.com/app/604510/Empires_in_Ruins/ for a Demo and to see the date of the upcoming release! Cheers!

Shadyhaxx Jun 11, 2017 @ 6:55am
Game looks intriguing. I love turned based strategy games with a medieval or fantasy theme. Also love your house building vid on youtube as well.

Sgt.H  [author] Jun 26, 2016 @ 1:15am
You're totally right indeed @wolf , my only "excuse" for not having cared enough for the page is that the workload from coding, managing the team and keeping the other social pages alive is so huge, that something i forget to eat :P I right now updated all the pics here in the gallery, added a short video (for the real gameplay trailer i am waiting to finalize some more elements of the battle maps), but i will also write a post on updates today or tomorrow, to point out at what we are doing. Thanks for pointing it out mate!

wolf Jun 25, 2016 @ 4:32am
hi there :) nice to read that. As for games I always refer to Steam, not to other media.
Maybe, for other potentially players too, you could leave a message here after having reached mile stones. I guess a link to Fb and Twitter might be enough as long as there is a message here :) but it's just a suggestion...

Sgt.H  [author] Jun 24, 2016 @ 10:53pm
hi @wolf, we're absolutely pedal to metal, take a look at our Fb and Twitter pages https://www.facebook.com/EmpiresInRuins/ and https://twitter.com/EiR_TD The terrains are still temporary, but most of the other stuff is already finalized, while gameplay is really getting there (90% of the main turn based map is ready, while the battle maps progress is now being very fast too)

Sgt.H  [author] Jul 23, 2015 @ 1:24am
Galina, drunkmissile and TaD, thanks a lot guys! stay with us and watch the progress, we are posting updates daily on all of our pages so that everybody can see the progress and provide feedback to further improve it! Cheers!
< >

Empires in Ruins has been Greenlit and is now listed in the Steam store. For the latest information, purchase options, and discussions for Empires in Ruins, please see it on the Steam Store or in the Steam Community.
Visit Store Page
For more details Visit Community Hub
For latest discussions
If you really, really want to, you can continue to the Greenlight page. Information on this page may be out of date, since all the action has moved to the areas noted above.