Greenlight > Games > AleHitti's Workshop
Greenlight is being retired. For more information on how to submit games to steam, refer to this blog post.
This item has been removed from the community because it violates Steam Community & Content Guidelines. It is only visible to you. If you believe your item has been removed by mistake, please contact Steam Support.
This item is incompatible with Greenlight. Please see the instructions page for reasons why this item might not work within Greenlight.
Current visibility: Hidden
This item will only be visible to you, admins, and anyone marked as a creator.
Current visibility: Friends-only
This item will only be visible in searches to you, your friends, and admins.
INK
Description Discussions2 Announcements1 Comments81 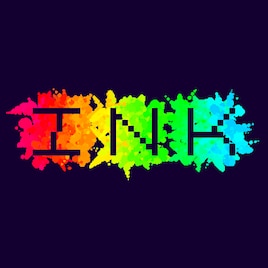 AleHitti
Offline
See all 6 collections (some may be hidden)

View INK in the store

You can now get INK on the Steam Store!

INK is a fast-paced platformer about using paint to uncover your surroundings.

Introduction
INK is a small project that I created post-Ludem Dare 32, after being unable to compete in the game jam. People responded positively to my prototype, so I continued to work on the project for roughly three weeks!

The game has a similar feel to hardcore platformers like Super Meat Boy. The object of each level is to defeat all of the enemies in the room and reach the goal. However, the terrain is invisible to the player. The player can discover terrain by physically bumping into it, or by performing a double jump. The double jump sprays paint bullets out of the player and increases the player's awareness of their surroundings. If the player happens to pump into spikes or falls to their death, paint will also shoot out from the player's last position. The room isn't wiped clean after death so that the player has an easier time navigating after multiple attempts!

I enjoyed the few weeks that I worked on INK, and I have received positive feedback from the itch.io community. If you would like to purchase the current build of INK, you can find it here: http://zackbellgames.itch.io/ink

Features
The current release of INK includes 40 unique levels filled with enemies, traps, and hazards. If Greenlit, I'd love to flesh out the game even further. I have quite the list of mechanics that I was unable to fit into the initial release and would love to incorporate them into an expanded product.
Popular Discussions View All (2)

When is this game coming to Steam?
Naps

Chazz Babylon Jul 9, 2015 @ 7:08pm
Yup, though I'm super-broke, you just got my money on itch.io. Looking forward to this getting Greenlit.

ZackBellGames  [author] Jun 3, 2015 @ 3:49pm
Wow, that was quick! Thanks, everyone! Excited to polish up a few things and release an expansion! Thank you all for voting, supporting, and sharing! :D

INK has been Greenlit and is now listed in the Steam store. For the latest information, purchase options, and discussions for INK, please see it on the Steam Store or in the Steam Community.
Visit Store Page
For more details Visit Community Hub
For latest discussions
If you really, really want to, you can continue to the Greenlight page. Information on this page may be out of date, since all the action has moved to the areas noted above.