Greenlight > Games > Angry Hangar's Workshop
Greenlight is being retired. For more information on how to submit games to steam, refer to this blog post.
This item has been removed from the community because it violates Steam Community & Content Guidelines. It is only visible to you. If you believe your item has been removed by mistake, please contact Steam Support.
This item is incompatible with Greenlight. Please see the instructions page for reasons why this item might not work within Greenlight.
Current visibility: Hidden
This item will only be visible to you, admins, and anyone marked as a creator.
Current visibility: Friends-only
This item will only be visible in searches to you, your friends, and admins.
Grid Masters
Description Discussions1 Announcements6 Comments51 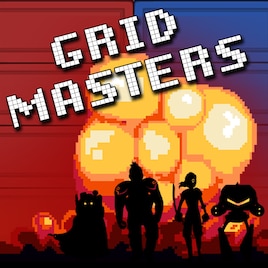 Angry Hangar
Offline
See all 13 collections (some may be hidden)

View Grid Masters in the store

We’re proud to announce that version 0.2.1.0 of Grid Masters was released today! This update introduces two new modes to local matches, a timed mode and a practice mode.

Timed mode is the same deathmatch you know and love, with a limit on how long the match will last. Playing with a time limit helps to encourage more offensive play. Currently, we have the time limit set to 99 seconds. In a future update, we will be enabling game settings and once we do, this value can be changed. Since the characters have different max health values, victories in timed mode are determined by the percent health remaining.

In practice mode, you can add dummy bots to the opposing team to test out each character’s movesets and find new combos. The bots stand in place to allow players to focus on their abilities. Practice mode also shows how much damage is being dealt when an ability hits. Dying in practice mode does not decrease the characters’ lives counter, so you can practice as long as you need.

We’ve also been working on updating the game’s theme and making all the assets more consistent. This update, we focused on the title screen. We’ve updated the title screen background as well as the Grid Master’s logo. We will be revisiting the menus to increase visibility and bring them more inline with our new theme.

So what’s next? We have several things planned for the next few updates. We will be enabling multi-client support for online games, deathmatches will see an art update, and a new Windows launcher will be released. We plan to start releasing features as soon as they become available now, so look for smaller updates more often. As always, if you find bugs, use the feedback feature in-game or use email us at support@angryhangar.com.

TL;DR - Our network code update has been released! We're slowing progress a little because of holidays but working on AI and cross-platform for the next update. Also Happy Holidays!

We are proud to announce that the Grid Masters Network Update has been released! You can now play with your friends through the internet. At the moment, this does require the host to forward a port and only supports IPv4 addresses. For more info on how to port forward check out
PortForward.com. Players connecting to a host will need to use the host’s external IP, which can also be found at the same site. Lastly, at the moment hosts only accept one client connection. We hope to enable multiple client support in the next update.We have started work on adding a practice mode into the game. We are also looking into adding the ability to add a timer to matches, but will have to see how the option affects game play. Our two big areas of focus for the next update are the following. We will be adding basic AI players so when your friends are busy, you can still work on improving your skills. Our next release will also hopefully be the first release that our game is available cross-platform, so that Mac OS X and Linux players can get in on the action.We have also moved to a more frequent update schedule. Our plan right now is to put out a new big update every two months, but it may take our team some time to get adjusted to this. Also, smaller patches and features may be released between big updates. We do not have the next update’s release date set yet but will discuss it on the other side of the holidays. On the subject of holidays, the team will be taking a much needed break until the first full week of the new year. We will not be putting out a blog post or screenshot Saturday next week, but you can still reach us through the support email or the feedback screen, responses may be delayed though.This week’s screenshot shows off some of the work that we’ve already gotten done on the practice mode. Both teams have unlimited lives and you can able see damage values of each character's abilities. This means you can test out character ability combos to figure out how to deal the most damage.From all of us at Angry Hangar, thank you for your patience and support. Have a Happy Holidays and a Happy New Year![portforward.com]

Read More
Description
Release date: Early Access Mid 2016
Fight for victory in a 1v1 or 2v2 grid-based deathmatch in Grid Masters. Represent your favorite faction as one of four characters (with more to come), each with their own unique abilities. Toss massive bombs, rocket punch, or send explosive robot minions to take your enemies down!


Grid Masters takes place on the planet Orikos, where vast alliances, held together by bonds of convenience rather than loyalty, constantly struggle for power and influence. Nations work anonymously to sabotage both friends and enemies, while giant company blocs, called Megacorps, hover around these nations like scavengers, controlling commerce and wielding enormous power under the leadership of a mysterious council, the Directorate.

The animosity among the different nations and the Megacorps is at its strongest on the Grid. Every year, the great powers of the Orikos send their finest warrior to compete in order to prove their power. The winner’s host gains influence and notoriety, while the victor is awarded fame and fortune. The losers pay briefly with their lives before the Respawners throw them back into the fray. Who will be this year’s champion?

We plan on releasing 3 DLC packs. Each pack will include 2 new characters and a new level to fight on. These packs will bring the total character count to 12 and the total count to 7.
Popular Discussions View All (1)

markzero May 20, 2016 @ 6:25am
For people checking up, their most recent update for this game appears to be March 22nd in social media.

Grid Masters has been Greenlit and is now listed in the Steam store. For the latest information, purchase options, and discussions for Grid Masters, please see it on the Steam Store or in the Steam Community.
Visit Store Page
For more details Visit Community Hub
For latest discussions
If you really, really want to, you can continue to the Greenlight page. Information on this page may be out of date, since all the action has moved to the areas noted above.