Advanced Player Start Guide -updated 5Jan17
By Sycloness
How to set up your empire in the first few turns to have a minimum of 6 planets, 7 technologies, and most of your starting area visible.
Rate 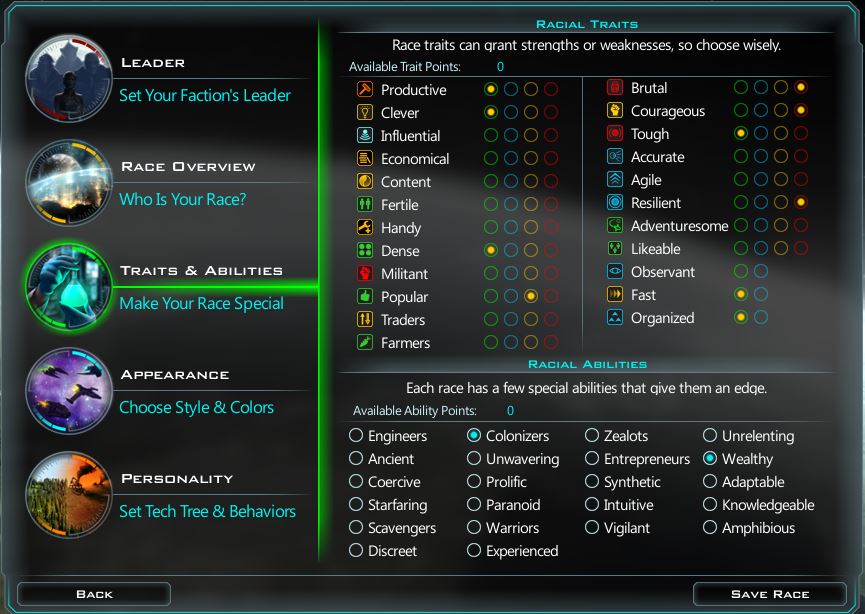 The custom rase has a good bonus to production, research, growth, ship space and faster ships. The negative traits are useless to me in my play style. I only send out trade ships to build up relations with aliens I want on my side. The negative planet defenses are worthless because I rarely let an AI get near a core planet.

Iconian Tech Tree
I like this because of the bonus to capacity, early ship regeneration, and colony management. This fits my play style of building an empire while researching techs to build and maintain many fleets. To be honest the the Lv2 Healing Hulls in the Engineering tree is a little to helpful. Currently ships heal for 5-10% of total hps after ever round of combat. Also has the best end game colony and ship bonus technologies.

Home Planet – Rush a lv1 research building. Find a research tile bonus to place the research building. On the home system it is best to find as many hubs, with a hub being 1 tile with 6 tiles around the center tile, as possible. One hub is needed for factories and one for laboratories, with the leftovers for population and other improvements. Note: Terraforming will be used to complete hubs, not every start gets 1 or more complete hub on creation. 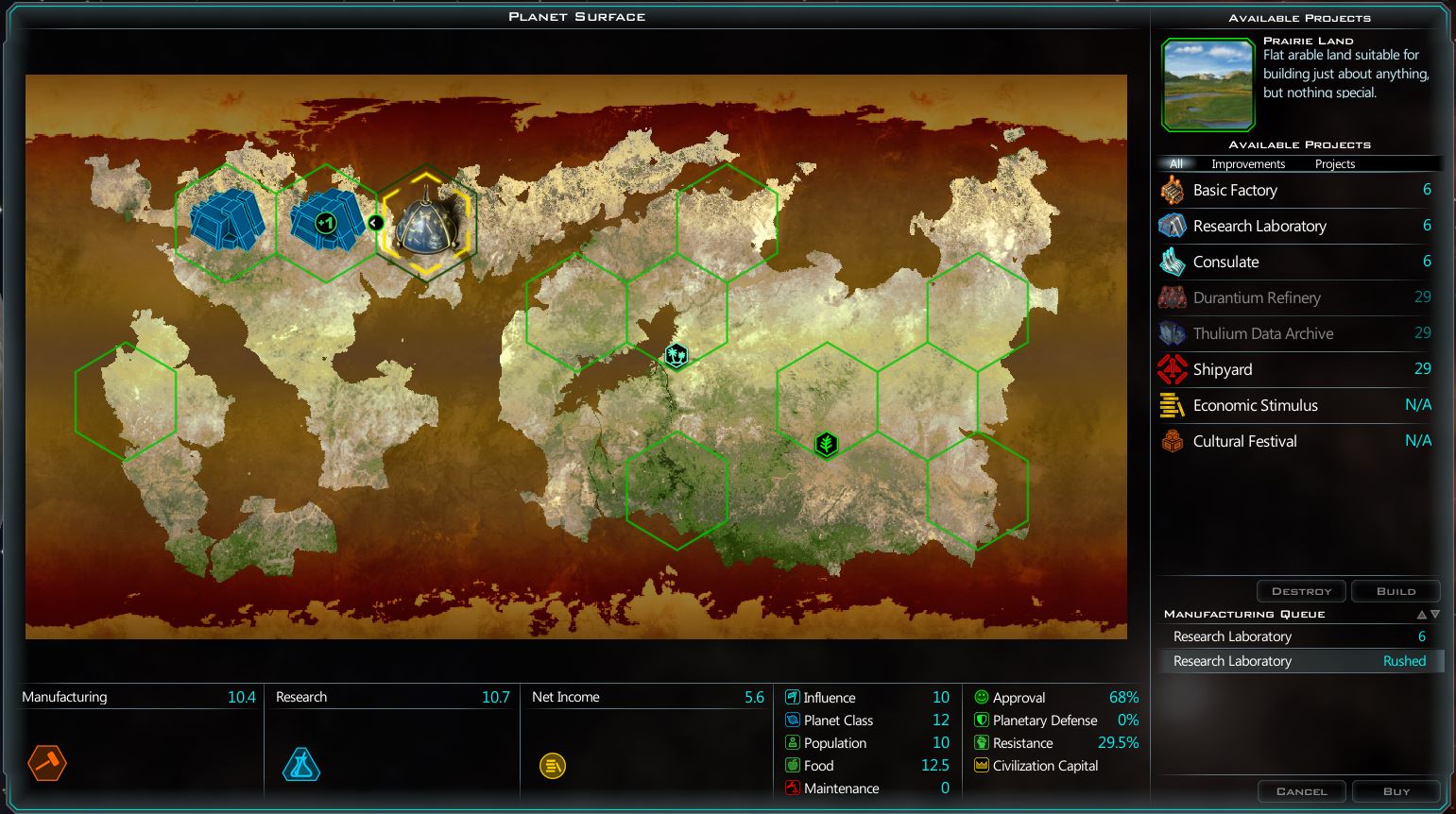 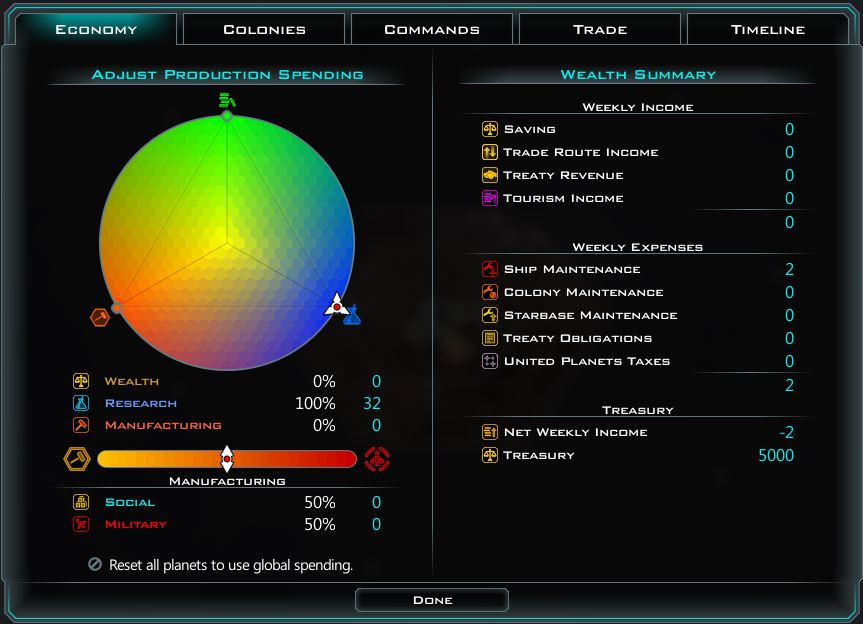 Research Path - Goal to make colony ships on tiny hall. These can be bought for 300 credits.

Ships – Scout for a good planet cluster on the edge of your space. When you colonize pick the shipyard as first pick to get it for free. Wait until the ability to buy tiny hall colony ships.

Mercenary Ships – The Ysengard is your best friend 100 credits for very anomoly. Buy any other survey or scout ships to get all the anomolies before the AI can. This is key to keep up your income until your colony and trade income is setup.

Expansion Colonies - Use your 3 new colony ships and send them off in 3 directions that are at the edge of your ship range. Colonize any good planets in that outer range. Once all colonies are founded these are your final boarders for a very long time. Make sure you have a shipyard in each of these 3 colonies. Once tiny colony ships are unlocked colonize all of the planets inbetween your home world and these out planets.

Expansion
Colonization
Spend your credits on tiny colony ships to grab all open planets within your borders.

Economy
Set 50/50 Manufacturing/Research and 100% Social. Any planets that are idle set to Military Subsidies and build tiny colony ships until all planets are claimed. Then build tiny constructors to claim all the resources and build economy starbases around your planets.

Research
Change focus to planet improvements. I prioritize manufacturing and food. I then work on morale and research improvements.

Tip - Artifact anomalies are huge research opportunities. Before you survey one change what you are researching to any high level tech. You might get lucky and get a free tech. I almost always get my ship hall techs for free this way.
Military Build Up
Fleet Build Up
Depending on galaxy size you will need a few medium ship fleets to defend your territory. I play on huge maps and 4 medium ship fleets with 8+ ships are more than enough to defend my territory.

Ship Type
I only use 2 ships and I rarely lose a game. I use a mass driver medium ship until I build carriers late game. Some games I do use large hulls and just double everything I put on the medium ships.

Hyperion Shrinker
Max out this building to increase capacity. I try to hit 60-75% increased capacity.

Logistics
I level this up so I can have at least 8 medium ships in a fleet. If at any time I notice I am losing 2 or more ships in my fleet I will research another level. It is far easier to increase fleet size and add extra ships than it is to design a new large ship then build up fleets. 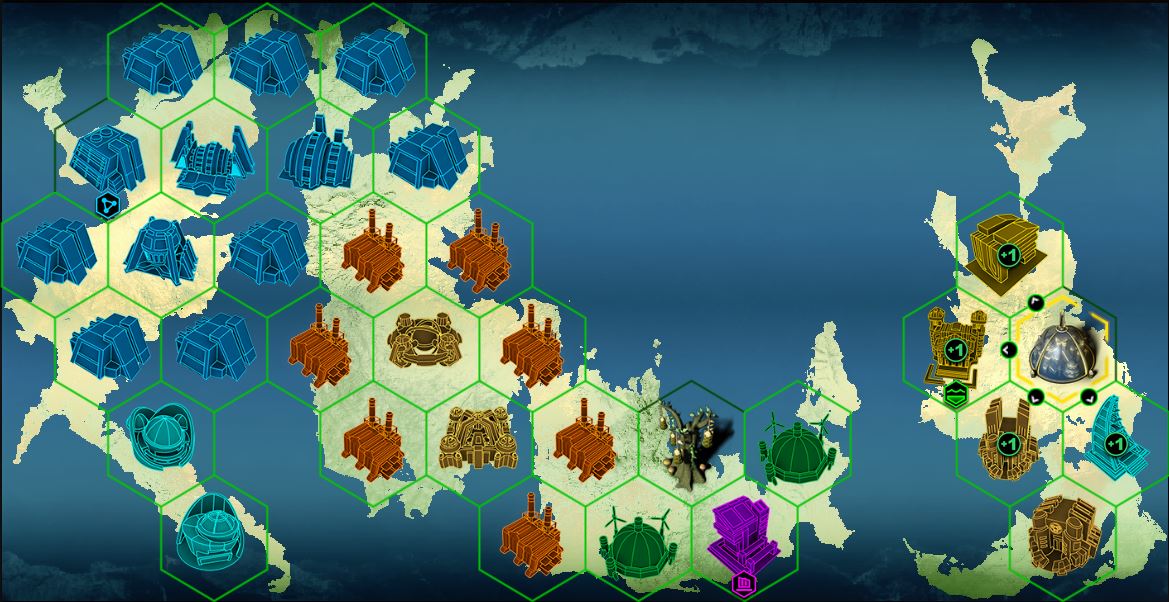 Colony Planets
Focus either for a Manufacturing, Research, or Financial hub. This depends on what event selection is made at the colony’s creation and tile bonus improvements. Build up the colony on the path selected and when there is nothing to build select the appropriate project to give your empire a boost.

Shipyard Hubs
Look for a system or cluster of systems that have 5 good quality planets. Place a shipyard in the middle for greater amounts of production for the shipyard. It is better to have few shipyards with more planets feeding it than to have one shipyard per planet. Also this is much easier to maintain. 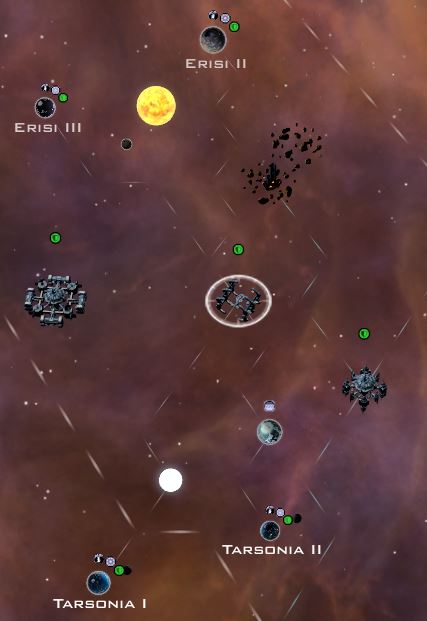 Manufacturing Hub
While out exploring space look for a grouping of 4+ planets clustered together with at least one high level planet. Here you will want to build up so that the shipyard is linked to all these worlds. On the larges one you will want to have max manufacturing, max military and high population. This planet will have the Hyperion military buildings linked for the highest bonus to increased ship hit points, range, logistical points, and capacity. 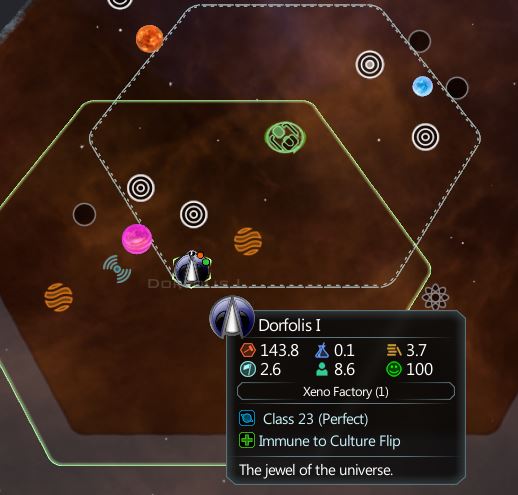 Ideological Traits
Pragmatic
I only like the Pragmatic play style. I like this tree for the free colony ships at the start of the game. I also like the extra starbase and trade bonuses.

Here is my Path:

Most my games play out with me getting all the Pragmatic and Benevolent races allied with me. I then wipe out the Malevolent races or sometimes I just give fleets to my allies and let them kill them off. I just sit back and hit end turn over and over while managing my planets.

Military Hub for Elite Ships
Military Hub
I find it best to max the hyperion shrinker and logistics systems to build the best ships. The hull size on the ships is greatly improved and the extra logistics allows for a bigger fleet. Right now the hyperion shipyard is kind of a waste with only +1 hps per level. This needs to scale better when huge halls have 775 hps. 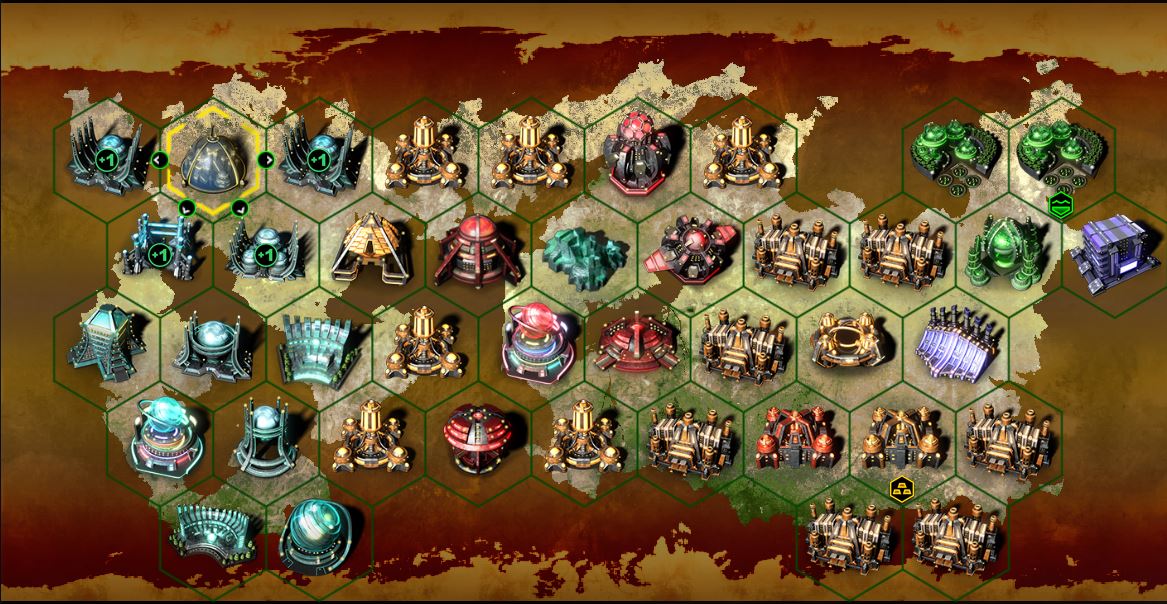 Results in a level 13 Hyperion Shrinker 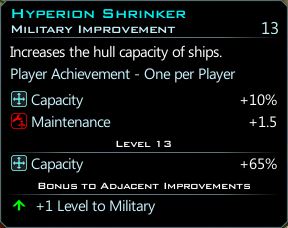 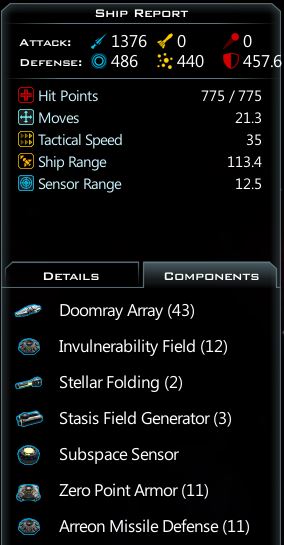 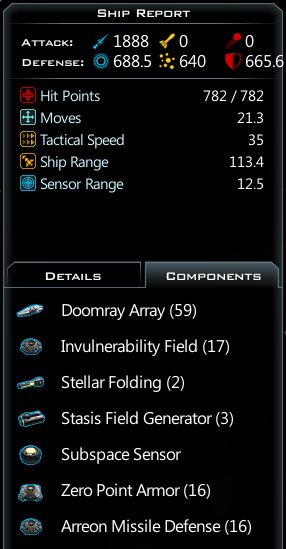 Starbase Goals
Mining – Get all the resources in your starting area. If able get the resources near the AI before they can. For module selection pick mining, sensors, and save the last one. If a relic is in range take that over sensors, unless an AI is nearby. Once Support Field Mastery s unlocked go back to all the mining Starbases and increase the range.

Economy – Get one up for the home planet system first. Then after all the mining Starbases are finished go back and ensure every system has at least one economy starbase.

Influence – Put a few of these in the holes in the area of influence and at the edges of your empire.

Military – I do not use these until middle of the game when an AI is either near or close to attacking. I place the bases along the border with my fleet nearby to attack anything that comes within range.

Andrew123 Nov 6, 2017 @ 9:38pm
Well with the new patches, i think synthetic fractions 're way more powerful then any other, u can go for about 200 raw production on each planet within 150 turns, even in multiplayers you will get problems quite fast to deny the synthetic faction his durantium ressources.

Sycloness  [author] Nov 2, 2017 @ 12:13am
Yes this is outdated. I basicly still follow the same plan and crush the game on all settings save godlike. I kind of miss the old way of playing, but again I played for a few years that way.

westonmickey13 Jun 1, 2017 @ 6:44am
Although i agree crusade did change things up......if you really liked this guide before crusade.....then you need to customize your civ.....the techs that still work for the iconian tree still work...you just have to choose ancient and shipbuilder.....which works great with pragmatic...beforewarned though....with the new DLC....altarians absolutely hate pragmatic and evil Civs

MrFoxAos May 22, 2017 @ 2:41pm
man as a guy comeing from dreadlords 2 to crusade 3 this guide makes me feel like crusade fucked the game up

Jeruzalem May 17, 2017 @ 9:11am
i know. i mean, you dont even start with factories or labs. im starting to regret this dlc, especially since it removed all my old saves and creations.
< >