Greenlight > Games > Sombr Studio's Workshop
Greenlight is being retired. For more information on how to submit games to steam, refer to this blog post.
This item has been removed from the community because it violates Steam Community & Content Guidelines. It is only visible to you. If you believe your item has been removed by mistake, please contact Steam Support.
This item is incompatible with Greenlight. Please see the instructions page for reasons why this item might not work within Greenlight.
Current visibility: Hidden
This item will only be visible to you, admins, and anyone marked as a creator.
Current visibility: Friends-only
This item will only be visible in searches to you, your friends, and admins.
Invisigun Heroes
Description Discussions2 Announcements2 Comments45 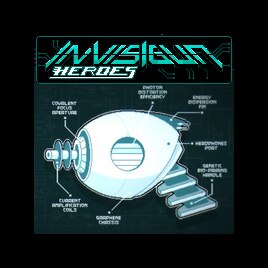 Sombr Studio
Offline
See all 3 collections (some may be hidden)

View Invisigun Heroes in the store

Hey guys, just wanted to thank you all for getting this greenlit, and the game has come a really long way since then. We also showed the first playable build at PAX South, and it was amazing - the booth was crowded the entire time!

I wanted to let you know that the Kickstarter to fund the final leg of development (mostly to work on online-play support) is nearing its end. The campaign has been going really well so far, with lots of press shoutouts (Kotaku, PC Gamer, Destructoid), and it needs some more support to help with a final surge. If you guys can help spread the word, I'm in debt to you all - let's make this happen! :D

Thank you to everyone who voted and spread the word - Invisagun Heroes has been greenlit! I am humbled and grateful, and very much looking forward to the months ahead of development and polish. Stay tuned for progress updates along the way.

Read More
Description
Release date: Late 2016
Invisigun Heroes is a multiplayer, single-screen battle arena with a twist: everyone’s invisible! Predictable grid-based movement ensures that you know where you are, but other players don’t. Vigilance is key as environmental tells such as footprints and other disturbances will point out careless cadets. Using special abilities and firing your weapon will also momentarily give you away. Along with items and powerups, these mechanics reward stealth, trickery, reflex, forethought, deception, bluffing, and awareness.

Cypherin Feb 5, 2016 @ 8:25pm
I played this game at PAX South, as well. Definitely was fun and brought me back to my days of playing Mega Bomberman on the Sega Channel (If anyone knows or remembers that). Extremely fun, polished with very few minor bugs (originally made this post stating there were no signs, but then I did remember a few).. The Dev was very open to receiving feedback to make the gameplay even better.

For anyone interested, the Kickstarter link is here: https://www.kickstarter.com/projects/shadiradio/invisigun-heroes/

Zero K Feb 5, 2016 @ 5:08pm
Got to play this at PAX. Current build looks even better than what is shown here; the graphics and character art look a lot better and they have more classes. Gameplay is smooth and surprisingly deep for how small the actual game is.

They've got a kickstarter going to finish up development (goal is $32,000, so not that much even). Google it and you'll find it, they could use a bit more support.

Invisigun Heroes has been Greenlit and is now listed in the Steam store. For the latest information, purchase options, and discussions for Invisigun Heroes, please see it on the Steam Store or in the Steam Community.
Visit Store Page
For more details Visit Community Hub
For latest discussions
If you really, really want to, you can continue to the Greenlight page. Information on this page may be out of date, since all the action has moved to the areas noted above.