Store Page
Reign Of Kings > Guides > Tag's Guides
This item has been removed from the community because it violates Steam Community & Content Guidelines. It is only visible to you. If you believe your item has been removed by mistake, please contact Steam Support.
This item is incompatible with Reign Of Kings. Please see the instructions page for reasons why this item might not work within Reign Of Kings.
Current visibility: Hidden
This item will only be visible to you, admins, and anyone marked as a creator.
Current visibility: Friends-only
This item will only be visible in searches to you, your friends, and admins.

ROK Server Update Changelog
By Tag
A per-version guide on anything you need to know when updating server versions.

Comments
R10 Server Changes
Authentication Changes:
Paging Changes:
Paging has been changed to allow objects to be instantiated over time. This allows more densely populated areas of the map to be loaded in smoother. Previously loading in a dense area could cause large pauses. Changes were also made to treat empty areas more cleanly, thus reducing the cost of disk I/O and general garbage creation.

What you need to do:
This update should not require any changes from you. It should work with the same settings you had before. Your old saves will be upgraded to work with the new paging system.

From our tests we did not see any problems with the upgrade. But, just in-case, the paging system does a backup of the old page files. If a problem does arise, when we fix the problem you can revert your page files to the old ones then run the server again to perform the upgrade again.
R8 Server Changes
Changes:
So make sure to also port forward the steam port! Default 27015

For more information about port forwarding, visit the Playing With Friends section on the page below:
http://steamcommunity.com/sharedfiles/filedetails/?id=406318745
Alpha 22 Server Changes
Changes:
Alpha 19 Server Changes
Changes
Ping Limiter
The ping limiter is a feature of the server that will kick players if they have a bad connection over a period of time.
How to Enable:

Alpha 17 Server Changes
Changes
Server Console Auto Updating
Use Server.exe to download the server files.
You can now use Server.exe by itself to download all of the necessary files to run a server.

A New Dedicated Server App
We created a new app so server administrators don't need to use a steam account to enable auto-update on their server.

Alpha 15 Server Changes
Changes
The New Server Console
The new server console allows administrators to manage the server through commands and chat. When you enter chat in the console it sends a chat message as the server player. You can perform any command as the server. (Stuff like /feed probably won't work)

The server console also monitors the server and restarts it if it does not respond for over 30 seconds. (You can change this time in ConsoleSettings.cfg) 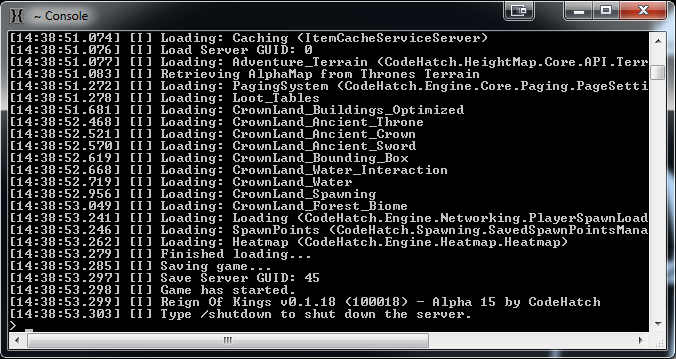 The Permission Command
The permission command is now available again.
Type /help permission in the server console or in-game for help with the command.

Multi-Level Support
You can now change the level that the server runs in the config file!

Removed Game Mode
We have removed the game mode value in ServerSettings.cfg because it was not actually being used by the game.

Server FPS Cap
We added a server FPS cap value to the ServerSettings.cfg file. The default value is 60. The higher this value is, the more CPU power will be used by your server.

Previous Saves Not Compatible
Any save that is from Alpha 14 or lower will no longer load when you launch a server.

How to Change the Save Location
You can now change the save location to any location on your computer.

The Guest Permission Group was Removed
The guest group was originally for players who have not registered on the server yet. However, in Reign of Kings, it is no longer needed since players register their names in the character customization screen.
The guest group was just making the already confusing permissions system more confusing. So we decided to remove the guest group and instead all players are added to the default group.

StoraStarkaFred Jun 6, 2017 @ 8:00am
i really love this game but, its just to sad to not see any changes. Please dont give up this game, breaks my heart!

MrWalter May 3, 2017 @ 10:11am
Add the horses or more weapon of siege or better optimized the games would do good at the games in general, for me I have the impretion that you have abandoned the game (speech came from a French player)