Greenlight > Games > HexWar Games's Workshop
Greenlight is being retired. For more information on how to submit games to steam, refer to this blog post.
This item has been removed from the community because it violates Steam Community & Content Guidelines. It is only visible to you. If you believe your item has been removed by mistake, please contact Steam Support.
This item is incompatible with Greenlight. Please see the instructions page for reasons why this item might not work within Greenlight.
Current visibility: Hidden
This item will only be visible to you, admins, and anyone marked as a creator.
Current visibility: Friends-only
This item will only be visible in searches to you, your friends, and admins.
Tank Battle: Normandy
Description Discussions0 Comments84 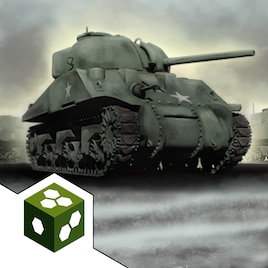 Tank Battle: Normandy is a historical wargame themed around the Allied invasion of Axis held in Europe on the 6th of June, 1944. Play as the Allies, British or Americans as many new units enter the theatre for the first time. Or, play as the Germans as they use their impressive arrays of heavy tanks, bunker emplacements and artillery to repel the invasion forces.

The invasion missions are a careful recreation of the naval landings at Omaha, Utah, Sword and Gold beaches. The other missions are a mixture of themed and historical battles that challenge even the most skilled wargamers. From the lush and forested bocage and fortified beaches of Northern France where tank is king, to tight urban environs where infantry units can rule all, Tank Battle: Normandy requires the player to be at the top of their game!

Thank you for considering voting for us on Greenlight!

If you enjoy strategy games, please also check out our other Greenlight for Civil War: Bull Run 1861!
http://steamcommunity.com/sharedfiles/filedetails/?id=436997215

HexWar Games  [author] May 27, 2015 @ 9:20am
We've been Greenlit! Huge thanks to everyone who voted for us! We'll let you know when the release date is confirmed for the PC & Mac release on Steam :)

Tank Battle: Normandy has been Greenlit and is now listed in the Steam store. For the latest information, purchase options, and discussions for Tank Battle: Normandy, please see it on the Steam Store or in the Steam Community.
Visit Store Page
For more details Visit Community Hub
For latest discussions
If you really, really want to, you can continue to the Greenlight page. Information on this page may be out of date, since all the action has moved to the areas noted above.