Store Page
Arma 3>  Workshop > Himmuguegeli's Workshop
This item has been removed from the community because it violates Steam Community & Content Guidelines. It is only visible to you. If you believe your item has been removed by mistake, please contact Steam Support.
This item is incompatible with Arma 3. Please see the instructions page for reasons why this item might not work within Arma 3.
Current visibility: Hidden
This item will only be visible to you, admins, and anyone marked as a creator.
Current visibility: Friends-only
This item will only be visible in searches to you, your friends, and admins. 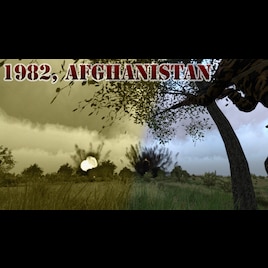 Himmuguegeli
Offline
See all 53 collections (some may be hidden)

[Feedback as well as a thumps up is much appreciated! Because mission makers do not make any money out of their work!]

[RHS & KUNDUZ NEEDED, easy to download and update]
Welcome to Afghanistan in 1982. A hellhole full of fascists fighting against their aggressor called the Soviet Union. This is a real old school type of gameplay. Everything is as authentic as it can be in ArmA 3. You´re back in the cold war! No laser sights, no super light mini-computer big binocular visors and the AKM also known as the AK-47. High calibres, poor body protection. Hard times to survive. This is for those of you who like it hard-core, pure and without mercy.

Be a part of a spetznas team which were sent to support the western area but stumbled into a setup of Al Quaida. 6 of them barely survived but, while trying to flee from the site their vehicle died on the way back to the base. Evac is already called, but this endless wave of fascistic muslims won´t wait to crush on you. They do not fear death, do you?

You managed to prepare and deploy a small Sandbag wall as well as a heavy MG. Air support is close by. But don´t think this will be easy, because the CIA equipped your enemy’s with useful tools to fight their invaders. Also make the best out of those 3 salvos you have from the BM-21, you will need to use this, do everything you can to survive!

sunliner Aug 10, 2016 @ 11:10am
v triggered. Anyways, the 'soviet-afghan' war wasn't really a war. more of a 1 sided conflict in which the US tried to arm the tusken raiders from Starwars against the entire empire.

goodpoints May 24, 2016 @ 10:02am
Al Qaeda in 1982? "Hellhole of fascists"? Mujahideen wearing bermuda shorts? "AKM also known as the AK-47"? Read a fucking book on the Soviet-Afghan War before you post this bullshit and try and pass it off as historical.

vlad_8011 Mar 9, 2016 @ 2:56am
Please remove depedency of Kunduz Afghanistan, i have armachollic version and steam doesnt detect it.

Himmuguegeli  [author] Oct 8, 2015 @ 9:17pm
And who says that i need them? You? Sorry but I won´t rely on a single opinion and I do know that most people do not own a super highspeed internet connection as well as the skills to install plenty of different mods for a single mission so i just use very common mods to make this accessable to majority of the people. And on that point my missions won´t change, for a reason.