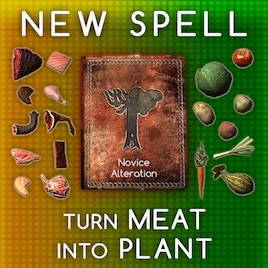 GyppiFX
Offline
See all 20 collections (some may be hidden)

This item has been added to your Subscriptions. Some games will require you to relaunch them before the item will be downloaded.
Description
Are you a vegetarian? Would you like to be one in Skyrim? Is all that meat troubling you? The "Turn Meat into Plant" Spell is the answer to your nightmares!
This mod adds a spell that allows you to turn raw\cooked meat into a vegetable or fruit, wherever you are and whenever you want!


FEATURES:
"Turn meat into plant" is an Alteration spell of Novice level;
When used it gives you experience as a common spell;
It works with both raw and cooked meat;
Vegetable and fruit are random and immediatelly added to your inventory;
Cheap to buy and to use;
It's a completely new spell, it doesn't replace any "vanilla" spells;
Supports the base game and all DLCs (DLCs not required).


WHAT IT DOES:
It turn into a vegetable or a fruit: Phaesant breast, Chicken breast, Raw rabbit leg, Salmon meat, Horse meat, Leg of goat, Raw beef, Horker meat, Mammoth snout, Venison and every cooked variants of the previous.


WHERE TO BUY THE SPELL TOME:
You can buy the spell tome "Turn meat into plant" from MANY mages\spell tomes merchants around Skyrim.

For example from: Farengar, the court wizard for Jarl Balgruuf the Greater at Dragonsreach in Whiterun or from Calcelmo, the elder mage of Understone Keep, in the city of Markarth.


MORE FREE STUFF:
Cook Raw Meat Spell: cook raw meat wherever you are and whenever you want without the use of Salt Pile => http://steamcommunity.com/sharedfiles/filedetails/?id=272512544

Check out my free software over www.xtreme-lab.net and my free game for Android: "Freeway Survival" => https://play.google.com/store/apps/details?id=com.xla.fws


PAID MOD:
This is not a paid mod, never was, never will be, you are free to download it, show it on video, have fun with or at it.
If you like this "funny" mod, check out the other free stuff I made, leave a "thanks" in the comments, share or give the mod a thumbs up! :)


POSSIBLE INCOMPATIBILITY:
This mod could be incompatible with other mods which adds items to mages\spell tomes merchants.

Spirit May 8, 2016 @ 7:34am
that is awesome as any other choice that you can and have the right to make in the game :D awesome, even before to choose my way and go veg, I didn't really enjoyed the meat XD expecially if it was dog meat eww, and that way I can also sell more stuff to the people around accepting leak or tomatoes :D good job !

RufusTheHound Jul 17, 2015 @ 3:07am
I think this mod DISCRIMINATES AGAINST US CARNIVORES
Jesus man, stop being so carnivorist
d**k