Store Page
Crusader Kings II >  Workshop > Galle's Workshop
This item has been removed from the community because it violates Steam Community & Content Guidelines. It is only visible to you. If you believe your item has been removed by mistake, please contact Steam Support.
This item is incompatible with Crusader Kings II. Please see the instructions page for reasons why this item might not work within Crusader Kings II.
Current visibility: Hidden
This item will only be visible to you, admins, and anyone marked as a creator.
Current visibility: Friends-only
This item will only be visible in searches to you, your friends, and admins. 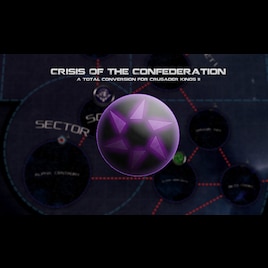 This item has been added to your Subscriptions. Some games will require you to relaunch them before the item will be downloaded.
In 1 collection by Galle
Crisis of the Confederation and Submods

It is the year 2998, and galactic civilization stands on the brink of collapse. Led by the charismatic politician Juan Lebedev, a coalition of periphery states have joined together in declaring their independence from the TERRAN CONFEDERATION.

In the face of this rebellion, the Confederation places its hopes in newly-elected President Morgan Afolayan and the good men and women of the CONFEDERATE SPACE COMMAND, charged with returning the defiant outer rim to Earth's control. As darkness falls across the galaxy, ships speed forth from Earth for the first great battle in nearly five hundred years...

What sorcery is this?!
Crisis of the Confederation is a total conversion mod for Crusader Kings II, set in an original science-fiction setting inspired by Fading Suns, Dune, the Foundation novels, and Warhammer 40,000. Players take on the roles of military officers, megacorporation CEOs turned politicians, space pirate kings, and neo-feudal warlords amidst the chaotic political upheavals of the 31st century.

What does the mod offer?

What DLCs are required?
Both Legacy of Rome and The Republic are STRONGLY RECOMMENDED. Crisis of the Confederation relies heavily on the Retinue mechanic and is balanced on the assumption that Legacy of Rome is present. The Republic is not strictly necessary, but there are many republics in the initial 2998 scenario, and so having it will improve your gameplay experience greatly.

Many portrait DLCs can be taken advantage of with the appropriate submods. See the "Crisis of the Confederation and Submods" collection.

I have no idea what I'm doing!
A ModDB article explaining the most important new game mechanics is available here.

Tell me more about the setting.
For a quick summary of the state of the galaxy in 2998, please see these lovely faction cards, courtesy of LordKee.

Is this compatible with...
No.

Some Assets Shamelessly Stolen From

Special Thanks To
Popular Discussions View All (23)

Poopenfarten Sep 26 @ 10:52pm
Is the version on Moddb more updated?

Big Piglet May 12, 2021 @ 9:08pm
@Castersuger123 Hello there monkey, I suggest you look through the comments for the link to the new crisis of the confederation mod as this is the legacy version and will only run on a rather old version of the game, good luck finding it.

Castersuger123 May 3, 2021 @ 11:26am
also fun fact i detlete every crisis of the confederation folder in documents/paradox/mod and it somehow pops up gain only mod that does this the rest stay deleted so odd

Castersuger123 May 3, 2021 @ 11:22am
for some reason i cant see it in my mod loader but can see all the submods. i deleted the old confederation mod deleted it from documents restarted steam and the launcher still same problem iv no idea how to fix it .