Store Page
Grand Theft Auto V > Guides > Carrythxd's Guides
This item has been removed from the community because it violates Steam Community & Content Guidelines. It is only visible to you. If you believe your item has been removed by mistake, please contact Steam Support.
This item is incompatible with Grand Theft Auto V. Please see the instructions page for reasons why this item might not work within Grand Theft Auto V.
Current visibility: Hidden
This item will only be visible to you, admins, and anyone marked as a creator.
Current visibility: Friends-only
This item will only be visible in searches to you, your friends, and admins.

Director Mode: Basics
By Carrythxd
In this guide, I will show you the Basics of the new Director Mode for Grand Theft Auto V on PC.

The 'Acting Up' Trailer

Option 1:
By hitting M on your keyboard, you will open up the Interaction Menu, from here you can scroll down to Director Mode and hit Enter. 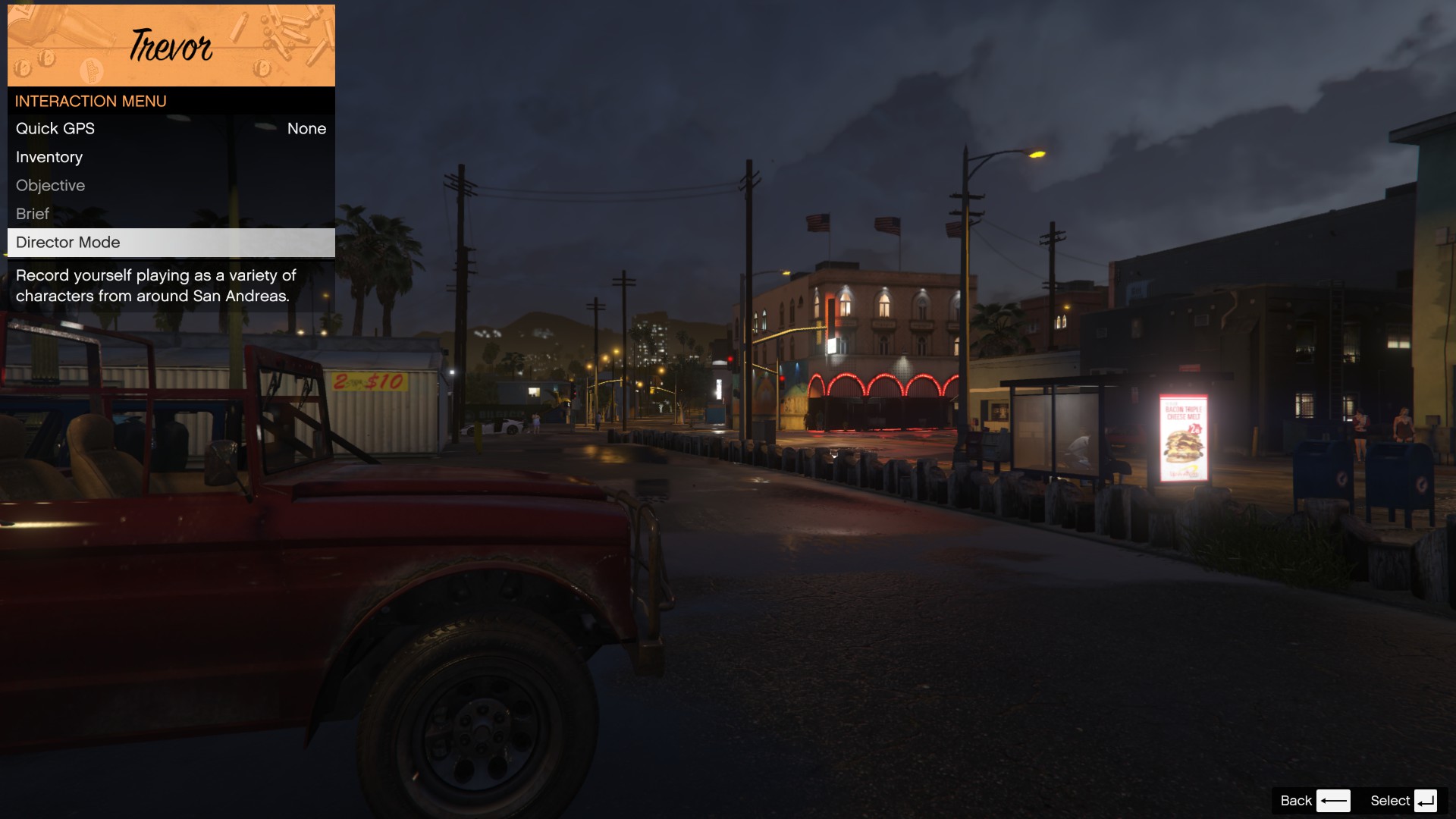 Option 2:
By hitting Esc on your keyboard, you will open up the Pause Menu. From here by moving to the right you will find a tab called 'Rockstar Editor', choose Director Mode and hit Enter. 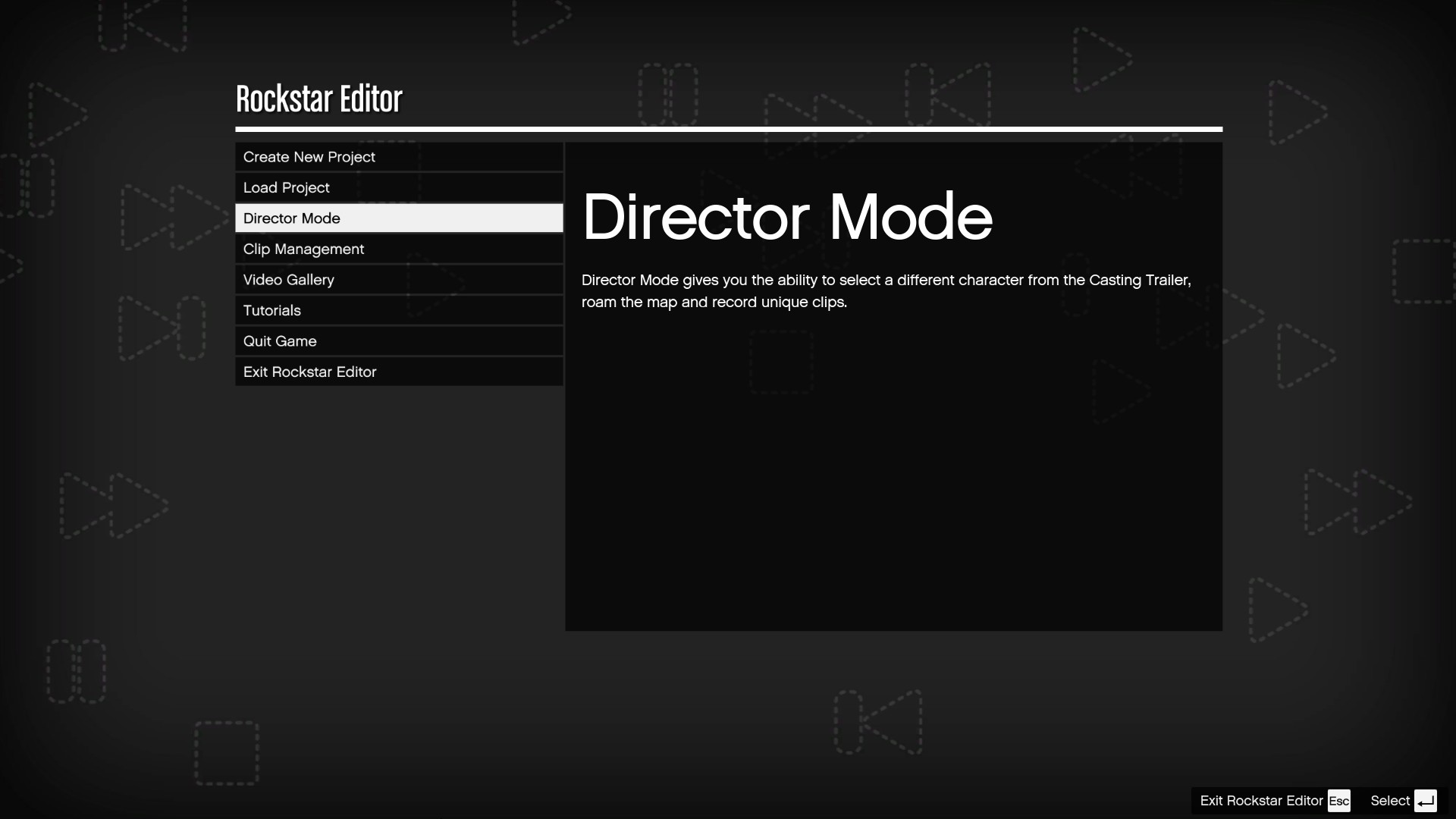 The 'Acting Up' Trailer
Once you have loaded up in Director Mode, you will spawn at the 'Acting Up' trailer. From here you can choose the Actor you are going to be playing as ingame and also the ingame settings. 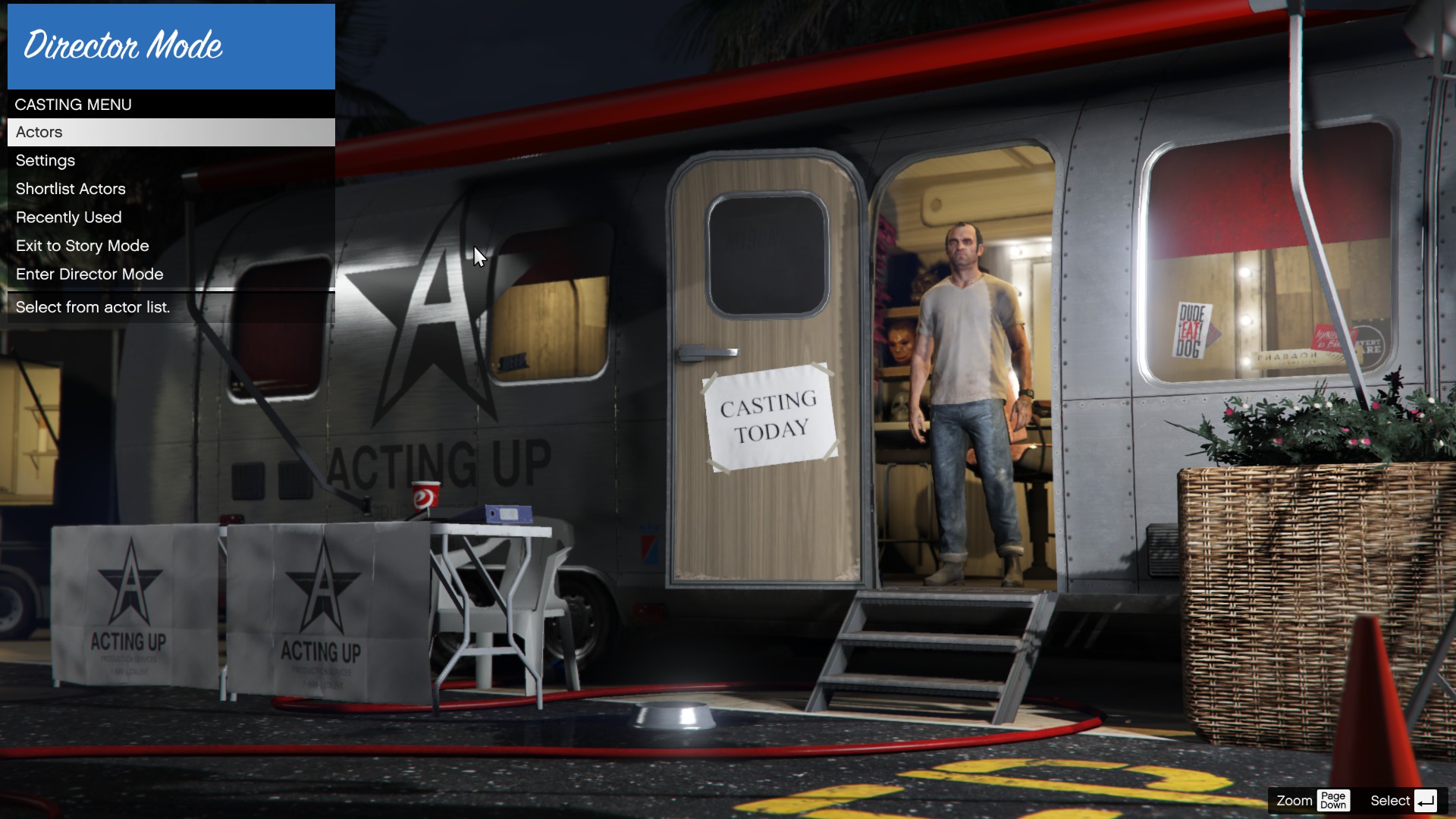 The Actor can also be changed ingame, as long as you have previously used Actors.

You can spawn ingame by pressing Enter on your desired Actor. 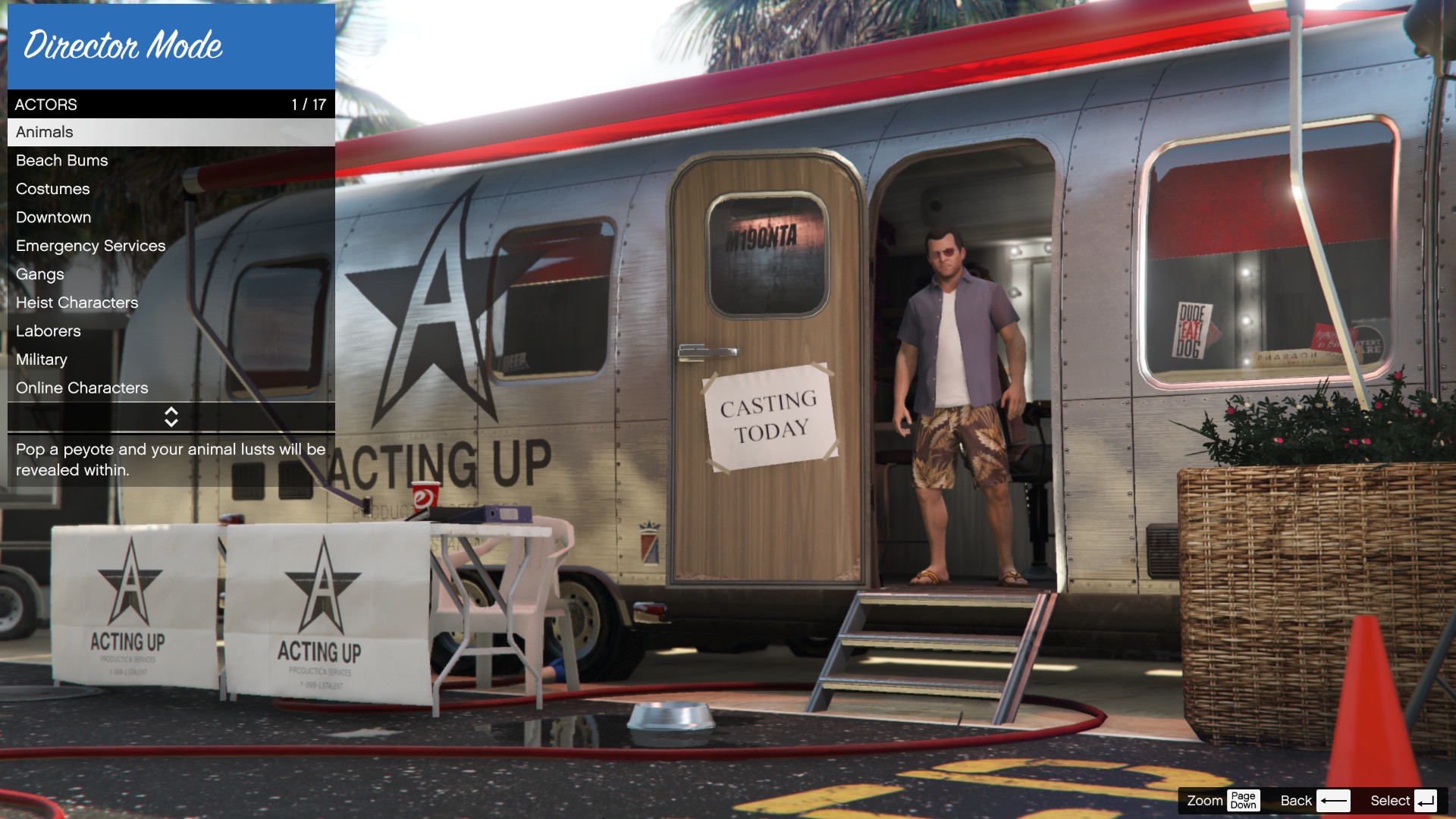 Settings
From the Settings menu, you can choose the Time of Day, Weather, Wanted Status, Pedestrian Density, Vehicle Density, Restricted Areas and also use the Story Mode cheats without messing up your savegame.

These settings can be changed ingame too, so you don't need to change them here if you don't want to. 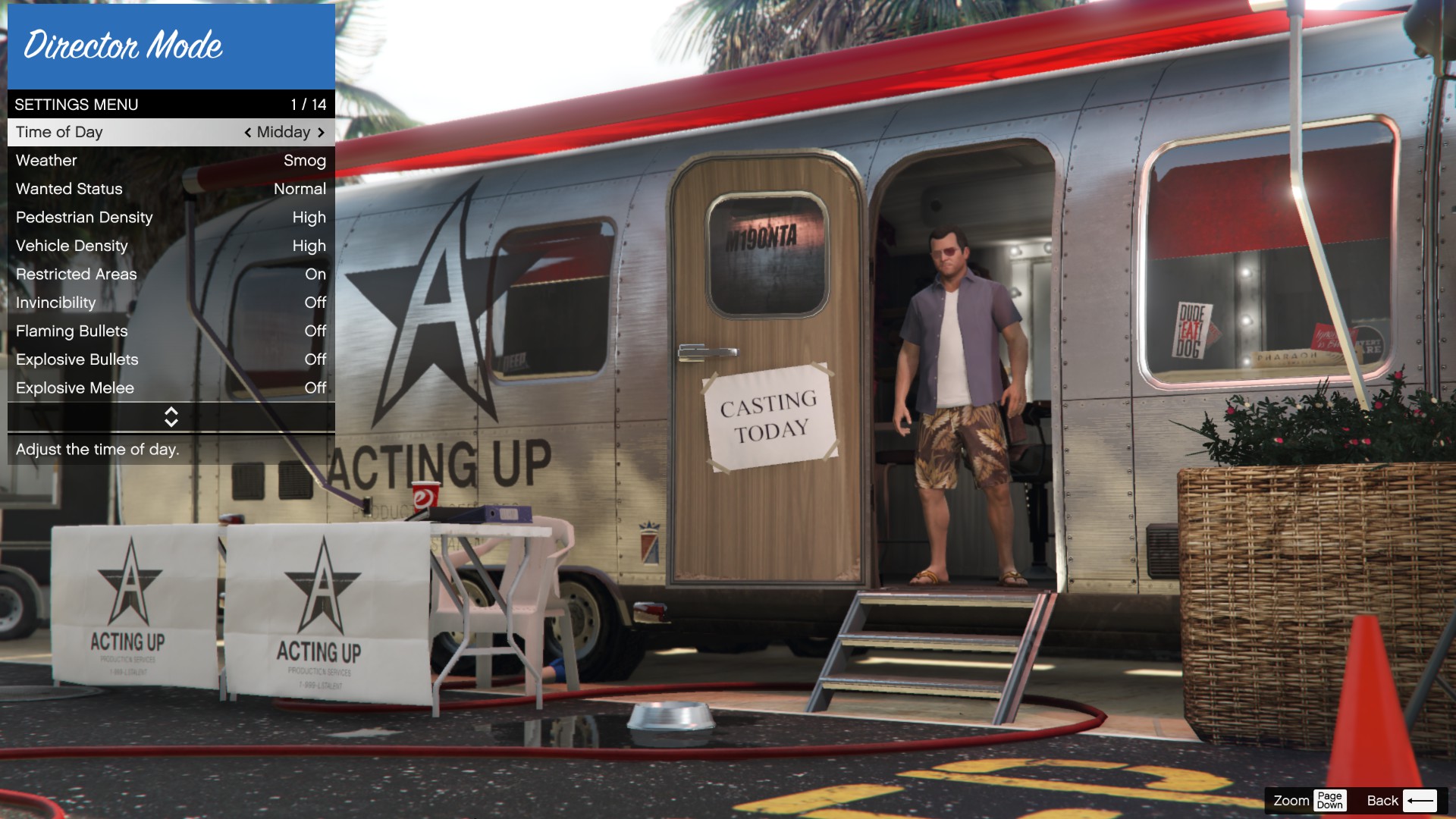 Shortlist Actors
The Shortlist Actors section, is a list of characters that you have shortlisted. You can shortlist a character by choosing them in the Actors section and hitting the Tab key on your keyboard.
Shortlisting means that the character, who you shortlisted, will always have the same clothes, face, etc. This way it is faster to move between characters if you are doing a video that requires different characters to be used but you want to keep the same clothes, face, etc on the character. 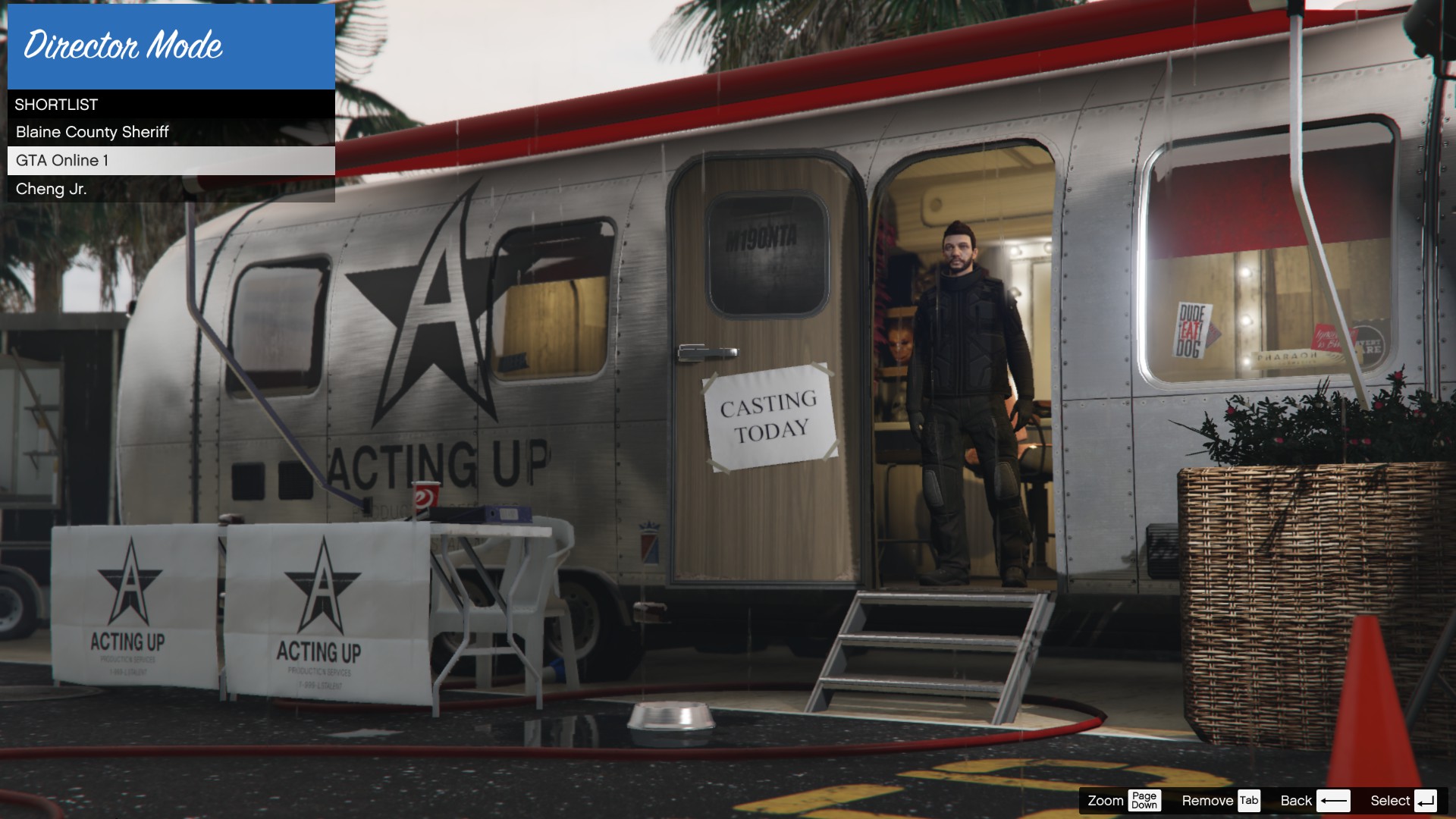 Recently Used
The Recently Used section, is as the name says, a list of the Actors you recently used. 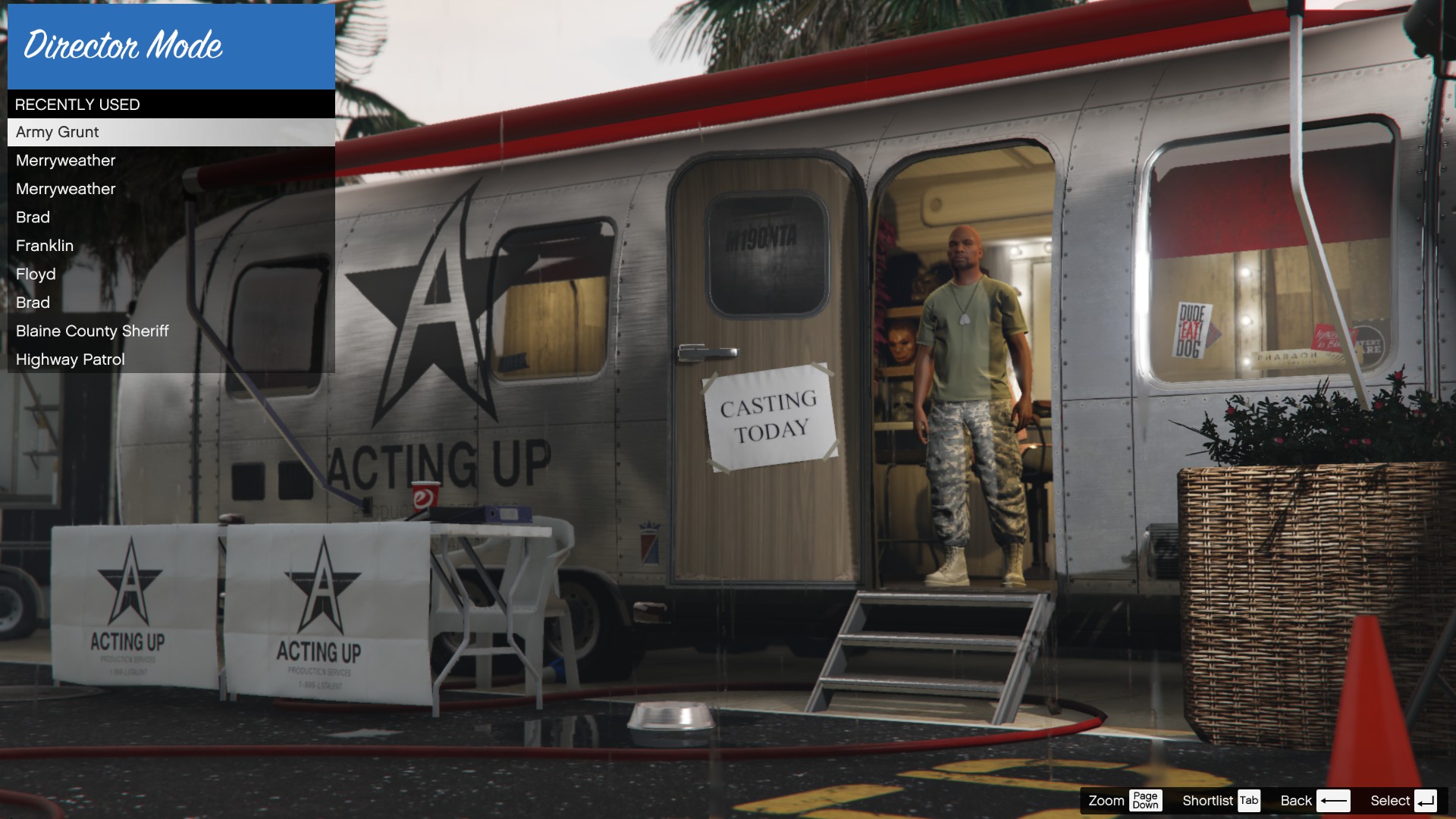 Ingame
Once you have chosen your character and you spawned in the game, you can open the Main Menu of the Director Mode by pressing the M key on your keyboard. 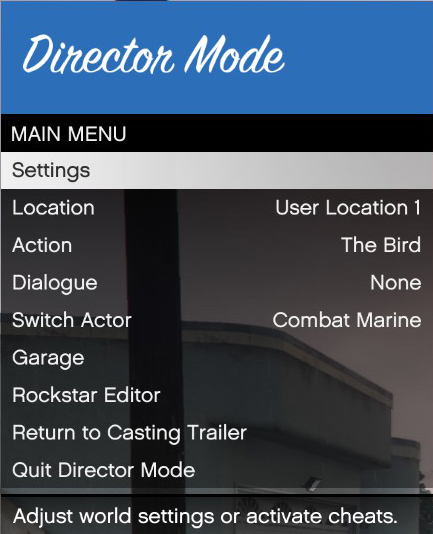 From here, you can choose the Settings, Location, Action, Dialogue, Switch Actor and also access the Garage of Frankin, Michael and Trevor.

Settings
From the Settings menu, you can choose the Time of Day, Weather, Wanted Status, Pedestrian Density, Vehicle Density, Restricted Areas and also use the Story Mode cheats without messing up your savegame. 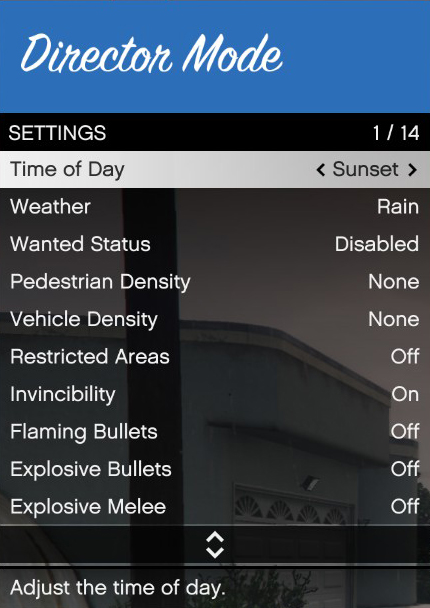 The only difference here is the Clear Area setting. This will clear the nearby area of pedestrians and vehicles.

Location
In the location menu you can create your own spawn locations and teleport to Rockstar created locations. Such as Docks, Sandy Shores, Cable Car and so on. You can teleport to these locations by pressing Enter on your keyboard.

You can also create your own User Spawn Locations by choosing the User Location 1 or User Location 2 and hitting the Tab key on your keyboard. This will save the location where your Actor is at and make it into a spawn location.

Action
The Action menu allows you to play the same Actions that you can do in GTA Online. You can preview an Action by pressing Enter and by pressing Caps you can perform the action ingame.

Dialogue
The Dialogue menu allows the character to play a set of preset dialogues, the dialogues are the same for all Actors.

Switch Actor
This menu only works if you have had any previous Actors in use in the Director Mode, if you have not used any Actors before, this option will be greyed out.

Garage
This tab allows you to access the garage of Franklin, Michael and Trevor. This option is greayed out if you don't have any vehicles available at their garages.
You can spawn the vehicle by pressing Enter on it, however, you are only able to spawn one vehicle at a time. 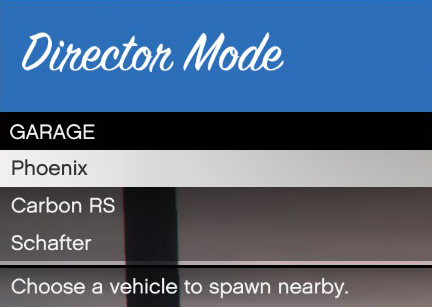 The Weapon Wheel
The weapon wheel features all of the weapons available in the game, the weapons also have unlimited ammo but you have to reload them. 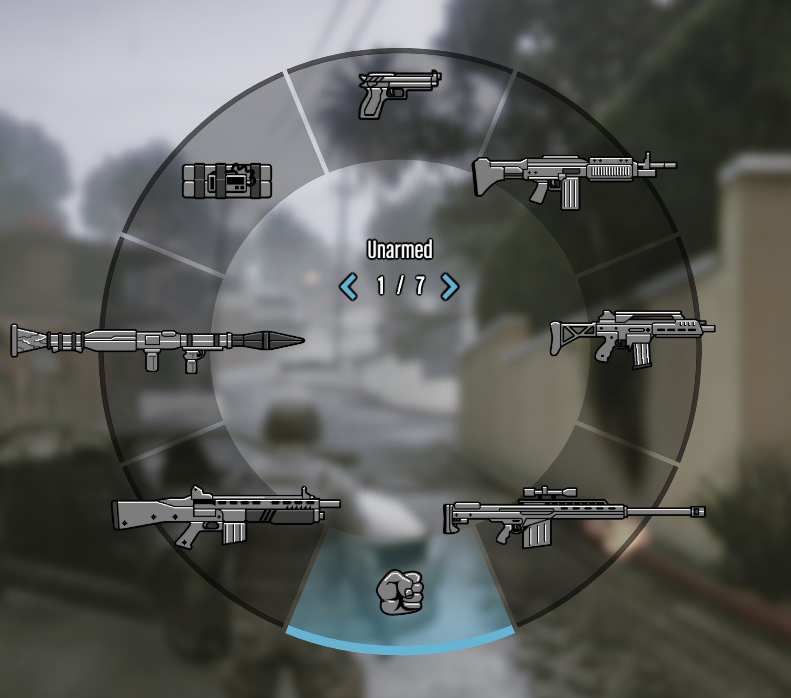 The End!
Now you should be ready to use the Director Mode!

The Director Mode also features the Action Replay and Recording functions, so you can record your videos here and they show up in the Rockstar Editor just like normal clips would that have been captured in the Story Mode/GTA Online.
But do keep in mind, that the first person mode only works on Franklin, Michael and Trevor. It does not work with any of the other Actors, I'm not really sure whats the point of that but it just is like that, and there isn't really anything that you can do about it.

If there is any mistakes or some improvements that I should to the guide, please let me know in the comments below!
< >
26 Comments

walking dogo Jul 26 @ 5:49pm
i dont get all weapons wehn i start and it keeps breaking random options

Carrythxd  [author] Aug 7, 2015 @ 2:08am
I think you need to switch to the outfit in GTA Online and then return to Director Mode

Sir Charls H. Wildwind Aug 6, 2015 @ 7:58pm
Im trying to use my Online Character in Director mode, while my characters default outfit (her normal one worn most often) is fine, i want to use one of the diffrent outfits i got. any tips on how i can get Director mode to work with that?